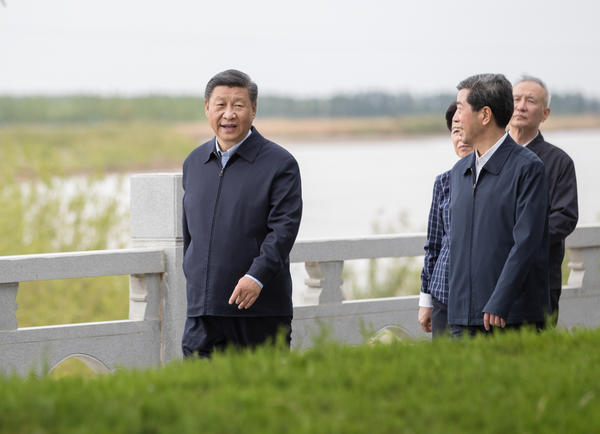 President Xi Jinping learns about local efforts in the environmental protection of the Yellow River in Wuzhong on Monday during an inspection tour of the Ningxia Hui autonomous region. WANG YE/XINHUA

Better livelihoods, clean environment highlighted during his tour of Ningxia

No ethnic group should be left behind in the country's fight against poverty, President Xi Jinping said on Monday.

Xi made the remark when he inspected the Jinhuayuan Community in Wuzhong, a city in the Ningxia Hui autonomous region.

"The People's Republic of China is a big socialist family consisting of multiple ethnic groups, which is reflected in your community, a multiethnic community with Hui and Han people as the majority," Xi told the residents.

The community is home to more than 13,000 permanent residents, nearly half of whom are from ethnic minority groups.

Xi, who is also general secretary of the Communist Party of China Central Committee, said he was glad to see that the community has good experience in maintaining harmonious relations between different ethnic groups.

The government will leave no ethnic group behind in the process of eliminating poverty, building a moderately prosperous society in all respects and in the country's drive toward modernization, Xi said.

The success of socialism is achieved through hard work and requires the concerted efforts of people of all ethnic groups, Xi said.

This is Xi's fourth inspection trip since 1997 to Ningxia, an inland, less-developed region with about 37 percent of its population belonging to the Hui ethnic group.

Before visiting the community, Xi inspected the village of Hongde and visited a section of the Yellow River to learn about efforts to advance poverty alleviation and strengthen ecological protection of the river, marking the fourth time Xi has visited the river in less than a year.

The village, with a population of 7,013, shook off poverty last year through the development of farming and animal husbandry while providing training to locals to help them secure skilled jobs outside the village. A cardboard packaging workshop was also set up in the village to offer stable local employment.

Song Shangchuan, 67, moved from a remote mountainous area to the village in Wuzhong eight years ago amid the government's poverty alleviation efforts. He told China Daily that he got 0.17 hectare of farmland from the government after the relocation.

Working at the cardboard packaging workshop, he earns 30 yuan ($4.20) a day, and receives a pension from the government.

"General Secretary Xi asked about how we felt after being relocated, and I told him that I think the Party's policies are great. I was so excited at the moment that I did not talk much," he said.

Xu Ling, a manager at the workshop, said that it was founded last year to provide employment opportunities to poor, elderly and disabled people in the village.

Enjoying a flexible working schedule, the workers earn an average of 600 to 700 yuan per month, and many of them use that income as pocket money for their grandchildren, she said.