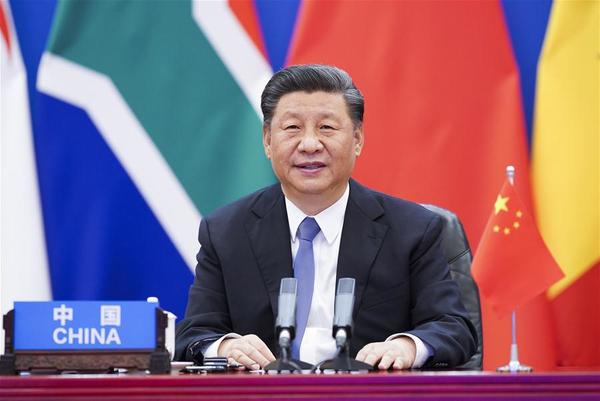 Chinese President Xi Jinping chairs the Extraordinary China-Africa Summit on Solidarity against COVID-19 and delivers a keynote speech at the summit in Beijing, capital of China, June 17, 2020. The summit, held via video link, was jointly proposed by China, South Africa, the rotating chair of the African Union (AU), and Senegal, the co-chair of the Forum on China-Africa Cooperation (FOCAC). [Photo/Xinhua]

President Xi Jinping announced a number of measures to consolidate China-Africa cooperation in battling COVID-19 at a special summit on Wednesday evening.

China will continue to make full efforts to support African countries' fight against the disease and continue to provide material support, dispatch medical teams and help representatives of African countries come to China to purchase medical materials, Xi said in the keynote speech at the Extraordinary China-Africa Summit on Solidarity Against COVID-19.

The summit, jointly initiated by China, South Africa and Senegal, was held via video link. The countries issued a joint statement afterward. South Africa is the rotating chair of the African Union and Senegal is co-chair of the Forum on China-Africa Cooperation.

At the beginning of his speech, Xi proposed observing a moment of silence for victims of the novel coronavirus and expressed condolences to their families.

China will begin construction of the Africa CDC headquarters ahead of schedule this year, Xi said. He added that China will speed up the construction of China-Africa Friendship Hospitals and the cooperation between paired-up Chinese and African hospitals.

"We pledge that once the development and deployment of a COVID-19 vaccine is completed in China, African countries will be among the first to benefit," Xi said.

For African countries that are hardest hit by COVID-19 and under heavy financial stress, China will work with the global community to provide them greater support, such as by extending periods of debt suspension, to help tide them over their current difficulties, he said.

"We encourage Chinese financial institutions to respond to the G20's Debt Service Suspension Initiative and to hold friendly consultations with African countries according to market principles to work out arrangements for commercial loans with sovereign guarantees," he said.

Within the Forum on China-Africa Cooperation framework, China will cancel the debt of relevant African countries in the form of interest-free government loans that mature by the end of 2020, Xi said.

Xi called for further cooperation in jointly building the Belt and Road to cushion the impact of the disease. Greater priority needs to be given to cooperation in public health, economic reopening and people's livelihoods, he said.

"China will work with the United Nations, the World Health Organization and other partners to assist Africa's response to COVID-19, and do it in a way that respects the will of Africa," Xi said.

China will explore broader cooperation with Africa in such new areas of business as the digital economy, smart cities, clean energy and 5G technology to boost Africa's development and revitalization, Xi said.

China will work with Africa to uphold the UN-centered global governance system and support the WHO in making greater contributions to the global COVID-19 response, he said, adding that China opposes politicization and stigmatization linked to COVID-19.

Xi said that the Chinese people have put up a fierce fight and made enormous sacrifices to bring the situation in China under control, and the country remains mindful of the risk of a resurgence.

African governments and people have also put up a united front and taken strong measures to effectively slow the spread of the virus, which is indeed a hard-won result, he said.

China and Africa have offered mutual support and fought shoulder to shoulder with each other, Xi said, adding that China will always remember the invaluable support from Africa at the height of China's battle with the coronavirus. Over 50 African leaders expressed support in phone calls or public statements.

In return, when Africa was struck by the virus, China was the first to rush in with assistance and has since stood firm with the African people, Xi said. China has delivered shipments of medical supplies and sent medical experts to African countries.

"No matter how the international landscape may evolve, China shall never waver in its determination to pursue greater solidarity and cooperation with Africa," Xi said.

Ruan Zongze, executive vice-president at the China Institute of International Studies, said China and Africa need to help each other to build a global community of health for all.

No country can beat the deadly disease alone in this highly connected world, he said.