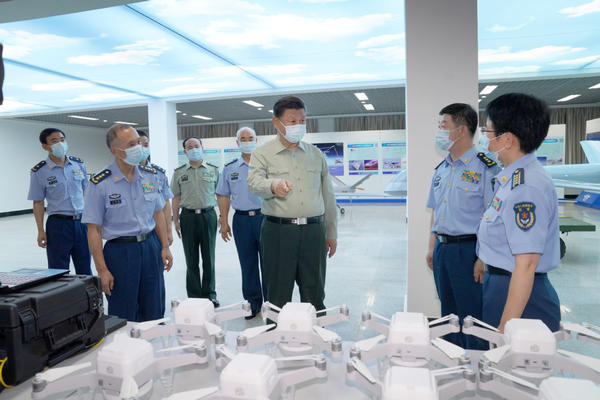 President Xi Jinping, who is also chairman of the Central Military Commission, learns about the training of drone operators during an inspection of the Aviation University of the Air Force in Changchun, Jilin province, on Thursday. LI GANG/XINHUA

Xi, who is also general secretary of the Communist Party of China Central Committee and chairman of the Central Military Commission, stressed further reform and innovation as well as continuous efforts to improve teaching.

He specified the requirements during a visit to the Aviation University of the Air Force in Changchun, Jilin province, ahead of China's Army Day on Aug 1. The university traces its roots to 1946 and the first aviation school of the People's Liberation Army. Xi urged the students to honor the school's illustrious history and traditions.

On the training field, Xi inspected the pilots during cardio and anti-vertigo training. He asked the trainees to work hard and smart, and contribute to China's military development.

Xi also inspected a drone lab, where he said unmanned warfare is profoundly changing the character of war. The university should strengthen research into unmanned warfare and real combat training, enhance the development of drone studies and train more talent in the command and control of unmanned aircraft, he said.

After hearing reports on the university, Xi said the strategy of using talent to strengthen the army must be implemented in every part of the military education process. Pilot training should also be optimized to meet the profession's needs, thereby increasing training efficiency, he said.

Military pilot instruction and exercises should focus on real combat, and should keep up with the demands and doctrines of modern warfare, Xi said. This includes more specialized professions, supporting teaching staff, creating new training models and other means to comprehensively enhance outcomes.

On behalf of the CPC Central Committee and the Central Military Commission, Xi also extended Army Day greetings to the personnel of the People's Liberation Army, the People's Armed Police Force, the militia and the reserve force.

On Wednesday, during his inspection trip to Siping in Jilin, Xi underlined the importance of adopting effective measures to protect the fertile black soil of Northeast China, saying that it should be cared for as if it were the "panda of farmlands".

Xi noted that the black-soil fields of the northeastern region, which are capable of producing high agricultural yields, face problems of declining fertility.

Northeast China is one of the country's most important grain production areas.

He visited a demonstration zone for green food production in Siping before checking the growth of corn crops and the cultivation of black soil areas.

Also on Wednesday, Xi visited the memorial hall for the Siping battle of the Chinese People's War of Liberation (1946-49).

Xi recalled the arduous journey of the Chinese revolution, saying that it was the lives of revolutionary martyrs that ensured the revolution's success.

"We must keep firmly in mind that New China did not come easily," he said.