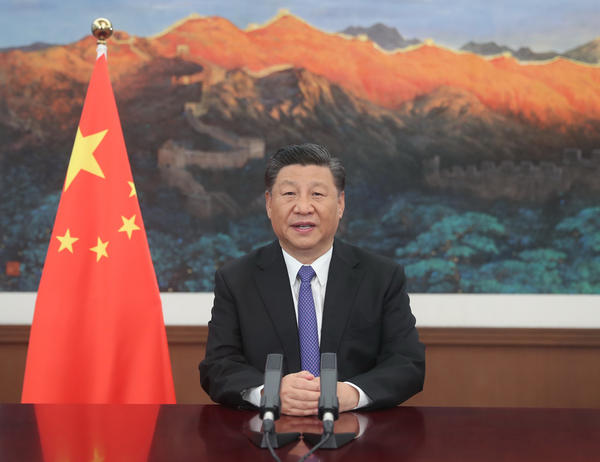 President Xi Jinping called on the Asian Infrastructure Investment Bank on Tuesday to make itself a new platform promoting development among all members and facilitating the building of a community with a shared future for mankind in the context of the global response to the COVID-19 pandemic.

In his opening address, via video link, at the fifth annual meeting of the Board of Governors of the AIIB, Xi urged the multilateral development bank to respond to adjustments and changes in the global economic landscape and engage more development partners in cooperation.

"It (the AIIB) needs to provide public goods for our region and beyond, push for regional economic integration and help make economic globalization more open, inclusive, balanced and beneficial for all," he said. "Let us stay open and inclusive and make the AIIB a new paradigm of multilateral cooperation."

Xi applauded the bank for its prompt move to set up a COVID-19 Crisis Recovery Facility to support its members in containing the virus and reviving their economies.

The AIIB had approved 16 projects via the facility as of July 16, allocating $5.9 billion in funding to support 12 members.

"This is a typical example of the AIIB's power of action. The global response to COVID-19 has made it clear that mankind rises and falls together in a community with a shared future," Xi said.

He recalled his proposal to establish the bank in late 2013, noting that this initiative was to develop infrastructure and connectivity in Asia and deepen regional cooperation for shared development.

The bank has gotten off to a good start and has gone from strength to strength, he said, as it expanded from 57 member economies at its launch in January 2016 to the current membership of 102 across the globe.

The AIIB said in a statement that it had provided close to $20 billion in infrastructure investment for 87 projects in 24 economies as of July 16.

"With more good friends and partners getting on board for higher-quality cooperation, the AIIB has established itself in the world as a new type of professional, efficient and clean multilateral development bank," Xi said.

Going forward, he urged the bank to aim at development for all and build itself into a new type of multilateral development bank promoting growth across the globe.

The AIIB should commit itself to serving the development needs of all its members and providing more high-quality, low-cost and sustainable investment for traditional as well as new types of infrastructure, he said.

Xi reiterated that China always supports and adheres to multilateralism, and pursues development with the rest of the world in a spirit of openness and mutually beneficial cooperation.

He pledged the country's continuous support for the bank, so it can contribute more to the global response to risks and challenges and the pursuit of shared development.

Jin Liqun was re-elected for a second term as president of the AIIB by the bank's Board of Governors on Tuesday. Jin's second five-year term will begin on Jan 16.

Liu Kun, minister of finance and governor of the AIIB, said the annual meeting can help establish consensus on ways to give play to the role of multilateral development banks as the pandemic still rages globally.

China will gradually inject the capital it has pledged to invest in the bank based on its rules of operation, he added.

Wei Jianguo, vice-chairman of the China Center for International Economic Exchanges and a former vice-minister of commerce, said the AIIB has contributed to the Belt and Road Initiative, and more countries in Asia, Europe and Africa will seek the AIIB's financial support to promote domestic economic growth.

He added that Japan and more European countries are likely to join the AIIB in the future.