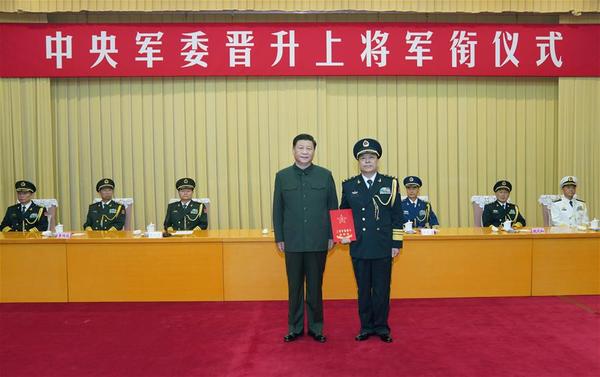 Xi Jinping, chairman of the Central Military Commission, presents a certificate of order at a ceremony to promote Xu Zhongbo, political commissar of the Rocket Force of the Chinese People's Liberation Army, to the rank of general, in Beijing, capital of China, July 29, 2020. The ceremony was held by the CMC in Beijing. [Photo/Xinhua]

The ceremony was attended by all members of the top military commission and some senior commanders of the Chinese military.

It is common for the Chinese military to promote commanders to the ranks of general or admiral, the highest ranks currently available to officers, before Aug 1, Army Day, which commemorates the founding of the PLA.

Xu, 59, a native of Shandong province, joined the PLA Ground Force in 1978 and moved up through the ranks.

He spent most of his military career with the 26th Group Army in Shandong and had been political commissar of an artillery brigade and then an armored division under the group.

In July 2017, Xu was promoted to the rank of lieutenant general. In December that year, he was named political commissar of the PLA Joint Logistic Support Force.

In another development, Xi signed an order recently to bestow decorations on three units and five researchers inside the PLA, including the PLA Honor Guards and a hospital ship of the PLA Navy.