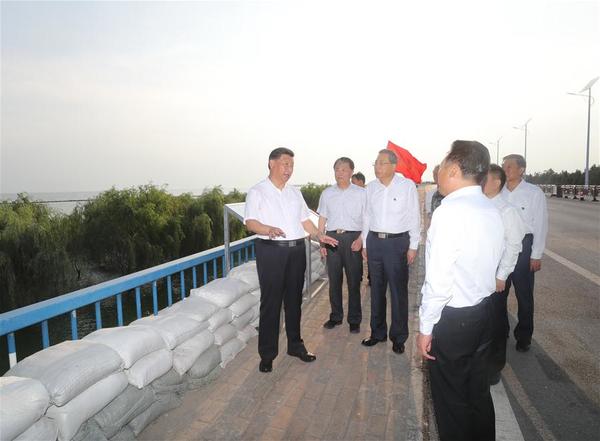 Chinese President Xi Jinping, also general secretary of the Communist Party of China Central Committee and chairman of the Central Military Commission, checks the water situation of the Chaohu Lake at a section of a dam in Feidong County of Hefei, capital of east China's Anhui Province, Aug. 19, 2020. Xi inspected Hefei on Wednesday afternoon. (Xinhua/Wang Ye)

Xi went to a section of a dam in Feidong County, where he checked the water situation of the Chaohu Lake and expressed his regards to those fighting the floods at the front line, including military personnel from the People's Liberation Army (PLA) and the People's Armed Police Force.

Xi also went to Anhui Innovation Center to learn about the technological innovation and emerging industries of Anhui, and visited a memorial hall marking the PLA's campaign to cross the Yangtze River during the Chinese People's War of Liberation, paying his tribute to revolutionary martyrs.