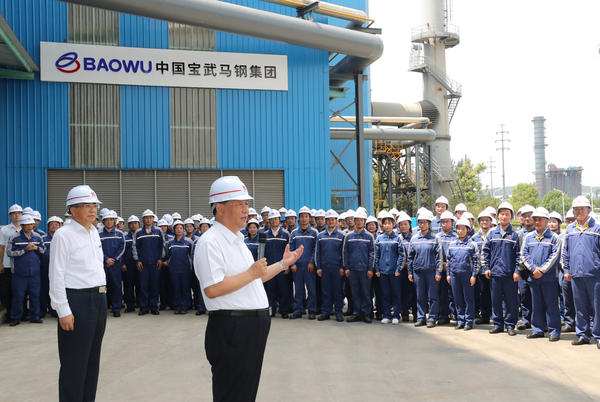 President Xi Jinping speaks to employees at Magang Group of China Baowu Steel Group on Wednesday during his visit to Anhui province. [Photo/Xinhua]

President Xi Jinping stressed on Friday the importance of expanding domestic demand and urged local authorities to explore effective ways to advance the country's new development mode of prioritizing both the domestic and international markets.

He made the remarks at a meeting wrapping up his four-day inspection tour of Anhui province, which has been devastated by severe flooding that started in June.

During the trip, Xi went to Fuyang, Ma'anshan and Hefei to visit such places as the front lines of flood prevention and rescue efforts, rural villages, factories and a revolutionary memorial.

The president talked with villagers affected by rising waters, praised the military for meeting the challenge of fighting the floods and learned about issues including the coordination of COVID-19 prevention and control with economic development, strengthening rebuilding efforts and working toward the country's 14th Five-Year Plan (2021-25).

He said that flood rescue and relief work remains arduous and he instructed Party committees and governments at all levels to take continuous measures on flood control, disaster relief and post-flood production recovery as well as helping companies affected by the floods resume production.

He ordered authorities to plan the construction of more water-control projects aiming to ensure the safety of rivers and lakes, improve the environment and protect urban areas from floods.

Local authorities must shoulder their responsibilities in ensuring food security, deepening supply-side structural reform in agriculture and promoting the competitiveness of the country's agriculture, he said.

Xi highlighted the importance of upholding a people-centered philosophy of development, saying that more supportive measures should be taken to reduce companies' burdens and help them to increase the number of jobs.

The people are the foundation for the governance of the Communist Party of China, said Xi, who is also general secretary of the CPC Central Committee.

He instructed officials to fulfill the Party's principle of serving the people, oppose formalism and bureaucracy, uphold firm beliefs and raise their capability to prevent political risks.

Xi reaffirmed his commitment to uphold zero tolerance for corruption, saying that the strict governance of the Party should be further carried out in local-level departments.

While visiting the Magang Group of China Baowu Steel Group on Wednesday, Xi praised the company's efforts to resume production at an early time despite the impacts of COVID-19.

He encouraged the company to take opportunities to develop new materials and new technologies and produce more competitive products.

Xi inspected the Xuejiawa ecological park on Wednesday afternoon and stressed the importance of preventing floods and protecting the environment.