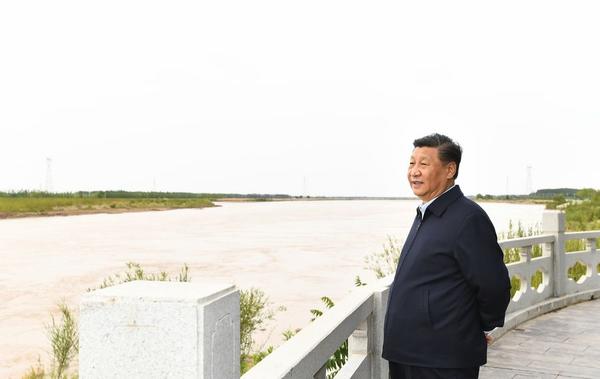 Xi Jinping, general secretary of the Communist Party of China Central Committee, learns about efforts to strengthen ecological protection of the Yellow River at a section of the river in Wuzhong city, Northwest China's Ningxia Hui autonomous region, June 8, 2020. [Photo/Xinhua]

A key Party meeting on Monday stressed the need to promote the intensive and economical utilization of the water resources of the Yellow River to ensure its high-quality development.

The meeting of the Political Bureau of the Communist Party of China Central Committee, presided over by Xi Jinping, general secretary of the CPC Central Committee, reviewed a guideline on development planning for the Yellow River basin.

The ecological protection and high-quality development of the Yellow River, known as China's Mother River, "concern the great rejuvenation of the Chinese nation", read a statement released after the meeting.

Efforts should be made to improve its environment, optimize the allocation of water resources, facilitate high-quality development of the whole basin, improve people's lives and promote the inheritance of Yellow River culture, it said.

"It is important to respect natural laws and taking targeted measures according to local circumstances to improve the environment in the Yellow River basin," the statement read.

It mandated efforts to reduce floods and droughts along the Yellow River for the long run and to improve the country's capabilities in dealing with various kinds of natural disasters by strengthening scientific research.

To boost the high-quality development of the Yellow River basin, meeting participants decided that effective measures should be adopted to accelerate the transformation of driving forces, to establish the modern industrial system with distinctive local features and advantages and to advance rural vitalization.

The meeting also stressed the need to protect and carry forward Yellow River culture and explore its value in modern times to strengthen Chinese people's confidence in Chinese culture.

The 5,464-kilometer-long river feeds about 12 percent of China's population, irrigates about 15 percent of arable land, supports 14 percent of national GDP and supplies water to more than 60 cities.

The Yellow River basin has a drainage area of over 752,000 sq km and covers seven provinces and two autonomous regions.

Since Xi became general secretary of the CPC Central Committee, he has made many visits to inspect the environmental conservation and high-quality development of the Yellow River basin, with the most recent in June, when he inspected the Ningxia Hui autonomous region.

Monday's meeting also reviewed a report on the latest round of disciplinary inspections by the 19th CPC Central Committee.

It said that results of the inspections showed that central Party and government organs should be more consciously implementing various kinds of decisions and arrangements of the CPC Central Committee on comprehensively deepening reform, thus pushing forward the country's modernization of its governance system and governance capabilities.