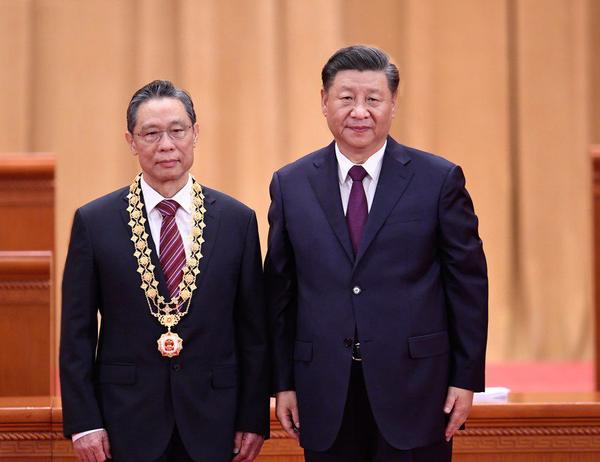 Chinese President Xi Jinping, also general secretary of the Communist Party of China Central Committee and chairman of the Central Military Commission, presents the Medal of the Republic to Zhong Nanshan during a meeting commending role models in the country's fight against the COVID-19 epidemic at the Great Hall of the People in Beijing, capital of China, Sept. 8, 2020. (Xinhua/Shen Hong)

Xi said China has achieved another heroic feat in humankind's fight against disease by securing major strategic achievements in the fight against the COVID-19 epidemic.

Xi presented medals to recipients of the Medal of the Republic and the national honorary title, including renowned respiratory disease expert Zhong Nanshan.

Xi summarized the features of China's spirit in combating the COVID-19 epidemic as -- putting people's lives first, nationwide solidarity, sacrifice, respecting science and a sense of mission for humanity.

Xi, also general secretary of the Communist Party of China (CPC) Central Committee and chairman of the Central Military Commission, said that over the past eight-plus months, China has fought a fierce war against the epidemic and has passed the extraordinary test of history.

He called for transforming the virus-fighting spirit into tremendous strength to build a modern socialist country and achieve national rejuvenation.

Xi made the comments during a meeting held at the Great Hall of the People in central Beijing that was attended by about 3,000 people.

He presented the Medal of the Republic to the 84-year-old renowned respiratory disease expert Zhong Nanshan and the medals of the national honorary title to three other medical professionals.

An official statement described Zhong as a leading expert in China's respiratory disease research and called him a "brave, outspoken and responsible doctor" who proposed epidemic prevention and control measures that saved numerous lives and made a great contribution to fighting both SARS and COVID-19.

Speaking at the event, Zhong pledged to cooperate with colleagues around the country and the world to continue working on tracing virus sources, blocking transmission routes, and developing rapid diagnosis, medicines and vaccines.

Speaking of the anti-epidemic battle, Xi said China has achieved another heroic feat in humankind's fight against disease by securing major strategic achievements in the fight against the COVID-19 epidemic.

The country managed to contain the rapid spread of the virus in just over a month. In about two months, the daily increase in domestic coronavirus cases fell to single digits. Meanwhile, a decisive victory was secured in once the hardest-hit Chinese city of Wuhan in just about three months. Besides, the country has effectively contained sporadic outbreaks.

Xi said the CPC Central Committee had adopted "extraordinary measures" to tackle the COVID-19 epidemic, and had insisted on making people's lives and health the first priority.

All-out efforts were made to ensure that not a single patient was left unattended. And the cost of treating COVID-19 patients was fully covered by the government, he added.

Under the strong leadership of the CPC Central Committee, China has effectively curbed the spread of the virus and protected people's lives and health to the greatest extent, Xi said.

Through a united will, the Chinese people put up a strong defense to contain the epidemic, Xi noted.

The Chinese mainland reported only 10 new infections on Monday, all imported cases from overseas, the National Health Commission said Tuesday.

China has become the first major economy to return to growth since the COVID-19 pandemic, and has taken the lead in the world in both epidemic control and economic recovery, Xi said.

"This has demonstrated China's strong ability of recovery and enormous vitality," he said.

China is also leading global efforts on vaccine research. The vaccine developed by researchers led by national honorary title recipient Chen Wei was the first in the world to enter phase-two clinical trials on April 12.

Chen, who was awarded the title of "the People's Hero," told Xinhua that the vaccine developed by her team is undergoing phase-three clinical trials, and can deal with mutations in the coronavirus.

Xi summarized the features of China's spirit in combating the COVID-19 epidemic as -- putting people's lives first, nationwide solidarity, sacrifice, respecting science and a sense of mission for humanity.

No efforts were spared when it came to saving lives, be it a 30-hour old baby or a centenarian, thus reflecting the CPC's concept of exercising governance for the people, Xi said.

"We are willing to do whatever it takes to protect people's lives!" he said.

Xi lauded the Chinese people for uniting as one and commended the heroes emerging from all walks of life amid the epidemic.

The laws of science were followed in making decisions, treating patients, conducting technological research and governing society, he added.

Xi said China has been responsible for global public health and has launched the most intensive and wide-ranging emergency humanitarian assistance since the founding of New China.

IN PURSUIT OF NEW VICTORY

Summarizing the experience accumulated and lessons learned, Xi emphasized the strong leadership of the Party, the unyielding will of the Chinese people, the strengths of the system of socialism with Chinese characteristics, among others.

Xi called for consistent efforts without loosening regular anti-epidemic response measures in order to clinch a "full victory" against the disease. He also called for exercising caution against the spread of the virus overseas and risks of sporadic outbreaks at home.

Demanding a decisive victory in building a moderately prosperous society in all respects and poverty alleviation, Xi said efforts must be made to make up for the time lost and the damage incurred due to COVID-19.

While stressing fixing weak links in the governance system, Xi said a strong public health system must be built and biosecurity defense capabilities must be enhanced.

He vowed to continue to support the WHO, aid countries and regions vulnerable to the pandemic and champion economic globalization and multilateralism so that the world economy can gain early recovery.

He also called for efforts, both mentally and professionally, to prepare for changes in the external environment over a fairly long period of time.

Chinese people and the Chinese nation will certainly forge ahead on the great journey in the new era, Xi said.

"No individual or force can stop Chinese people's march toward a better life," he said.