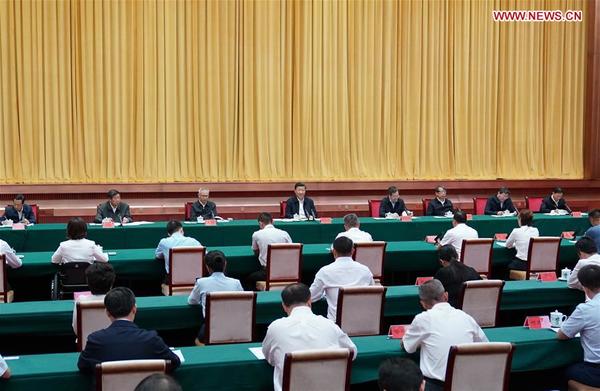 Xi, also general secretary of the Communist Party of China (CPC) Central Committee and chairman of the Central Military Commission, made the remarks during a meeting with grassroots representatives in central China's Hunan Province on Thursday.

Stressing the goal of realizing people's aspirations to live a better life, Xi encouraged the public to offer advice and suggestions for compiling the plan through various channels to ensure that the plan will respond to the wishes and meet the expectations of the people.

During the meeting, 10 primary-level representatives offered their suggestions on rural education, poverty alleviation through industrial support, and the development of micro and small businesses, among other aspects.

China is still in an important period of strategic opportunity for development, but is facing new opportunities and challenges, Xi said, noting that the people have been united as one in the face of hardships and difficulties and worked hard to make major contributions.

When making plans for the 14th five-year period (2021-2025), more efforts should be made to improve weak links concerning people's livelihood, while striving for high-quality development so that the people will always have a stronger sense of fulfillment, happiness, and security, according to Xi.

Xi emphasized consolidating governance at the primary level and uniting and guiding the people to give full play to their enthusiasm, initiative, and creativity.

Xi urged Party members and officials to play an exemplary role, lawmakers to strengthen their ties with the people, political advisors to better communicate with and serve the people, and rural people who have become well-off to more actively help those who lag.