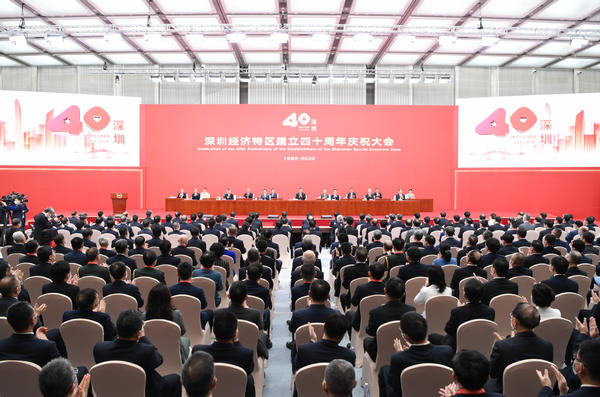 A grand gathering to celebrate the 40th anniversary of the establishment of the Shenzhen Special Economic Zone is held in Shenzhen, Guangdong province on Oct 14. [Photo/Xinhua]

President Xi Jinping attended a grand gathering on Wednesday celebrating the 40th anniversary of the establishment of the Shenzhen Special Economic Zone, and delivered a speech.

Here are some highlights:

- The establishment of special economic zones is a great innovative move made by the Communist Party of China and the country in advancing reform and opening-up, as well as socialist modernization

- Shenzhen is a brand-new city created by the Communist Party of China and the Chinese people since the country's reform and opening-up began, and its progress over the past 40 years is a miracle in the history of world development

- Shenzhen has made five historic leaps forward since the establishment of the special economic zone 40 years ago: (1) From a small backward border town to an international metropolis with global influence; (2) From implementing economic system reforms to deepening reform in all respects; (3) From mainly developing foreign trade to pursuing high-level opening up in an all-round way; (4) From advancing economic development to coordinating socialist material, political, cultural and ethical, social and ecological advancement; (5) From ensuring people's basic needs are met to completing the building of a high-quality moderately prosperous society in all respects.

- Shenzhen's achievements in reform and development come through trials and tribulations

- Shenzhen has acquired valuable experience in reform and opening-up

- Forty years of reform and opening-up of Shenzhen and other SEZs have created great miracles, accumulated valuable experience and deepened the understanding of the laws of building the SEZs of socialism with Chinese characteristics

- Shenzhen should enrich the new practices of "one country, two systems", and lead the country's process of socialist modernization

- Shenzhen must deepen reform and opening-up to keep pace with the times; Shenzhen should promote entrepreneurship and the protection of intellectual property rights

- Governance system should be driven by innovation