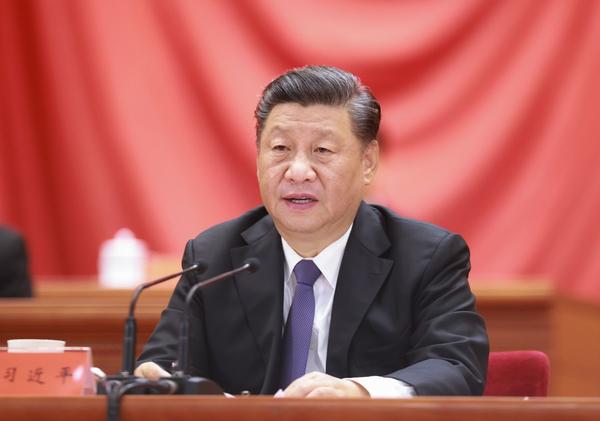 Chinese President Xi Jinping, also general secretary of the Communist Party of China Central Committee and chairman of the Central Military Commission, addresses a meeting marking the 70th anniversary of the Chinese People's Volunteers entering the Democratic People's Republic of Korea to fight in the War to Resist U.S. Aggression and Aid Korea, at the Great Hall of the People in Beijing, capital of China, Oct. 23, 2020. (Xinhua/Ding Lin)

-- Xi called the war victory "a declaration that the Chinese people have stood firm in the East, and an important milestone in the Chinese nation's march toward the great rejuvenation."

-- "It is necessary to speak to invaders in the language they know: that is, a war must be fought to deter invasion, and a victory is needed to win peace and respect," Xi said.

-- "In today's world, the pursuit of unilateralism, protectionism and extreme egoism leads nowhere," Xi said, adding that blackmail, blockages and the application of maximum pressure on others also lead nowhere.

Xi, also general secretary of the Communist Party of China (CPC) Central Committee and chairman of the Central Military Commission, made the remarks while addressing a high-profile meeting in Beijing to commemorate the 70th anniversary of the Chinese People's Volunteers (CPV) entering the Democratic People's Republic of Korea (DPRK) to fight in the war.

Eight months after the founding of the People's Republic of China, the Korean War broke out in June 1950. The flames of war soon reached the border river of Yalu, and U.S. planes repeatedly bombed northeast China's border regions, causing casualties and property losses and seriously endangering China's security.

It was a time when New China was still poor, with unfavorable weapons and weak air and navy forces. But the United States, which led the rival forces in the war, had much greater military power.

Calling the CPV entering the Korean front in the War to Resist U.S. Aggression and Aid Korea a just move of an army for justice, Xi lauded the great patriotism demonstrated by them.

Xi said all those who had contributed to the victory of the war have never been forgotten.

The forces of China and the DPRK defeated their armed-to-teeth rival and shattered the myth of invincibility of the U.S. army, Xi said.

The great victory in the war defied the invasion and expansion of imperialism, safeguarded the security of New China, stabilized the situation on the Korean Peninsula and upheld peace in Asia and the world, he said.

Chinese and DPRK people and armies went through thick and thin, forging a great friendship with blood in the war, he said.

Xi thanked all peace-loving countries and people, and friendly organizations and personnel in the world who had given their firm support and assistance to the CPV entering the Korean front in the war.

In his speech, Xi called the war victory "a declaration that the Chinese people have stood firm in the East, and an important milestone in the Chinese nation's march toward the great rejuvenation."

It smashed the aggressors' plot to nip New China in the bud, and helped Chinese people completely get rid of the label of the "Sick Man of East Asia," Xi said.

The war victory laid a solid foundation for New China's important status in Asia and on international affairs, demonstrating the Chinese people's resolve to safeguard world peace, he said.

It advanced the modernization of China's national defense and the armed forces, Xi said.

Profound changes occurred to the strategic landscape of Asia and even the world following the war, which, he said, has shown that justice is sure to prevail over power.

Across China, many expressed their gratitude to CPV veterans for their sacrifice and contribution to the nation.

Shu Jian, a professor with the National Defense University, hailed the CPV's victory in the war "a world-class victory" that brought a fundamental change in the international status of China after lagging behind in development and being vulnerable to aggression for more than 100 years.

Over the past seven decades, China has developed from a war-torn country into the world's second-largest economy, contributing 30 percent of global economic growth.

The per capita disposable income of Chinese residents surged by two-thirds to 30,733 yuan (about 4,600 U.S. dollars) from 2013 to 2019. The country aims to eradicate absolute poverty by the end of 2020 and realize a moderately prosperous society in all respects.

"Some of the comrades-in-arms who crossed the Yalu River aboard the same truck with me couldn't make it to be back to the motherland," she recalled.

"The values the young men and women demonstrated in meeting challenges and overcoming difficulties on the battlefield 70 years ago are eternal," said Li Guoqing, 21, a student at Northeastern University. "They are true heroes who we admire."

In his speech at the commemorative gathering, Xi lauded the great spirit forged in the war, stressing that it must be promoted and passed down through generations.

"It is necessary to speak to invaders in the language they know: that is, a war must be fought to deter invasion, and a victory is needed to win peace and respect," Xi said.

As China commemorates the great victory and advances the great cause, Xi urged efforts to uphold the Party's leadership, put people first, boost economic and social development, advance the modernization of national defense and the armed forces, as well as uphold world peace and justice and promote the building of a community with a shared future for humanity.

Seeking peaceful development and win-win cooperation is the right way forward as people of all countries need to join hands to overcome difficulties and meet challenges facing the world, Xi said.

Blackmail, blockages and the application of maximum pressure on others lead nowhere, he said.

"China will never sit idly by and allow its national sovereignty, security and development interests to be undermined, and will never allow any individual or force to impair or divide this sacred territory," Xi said.