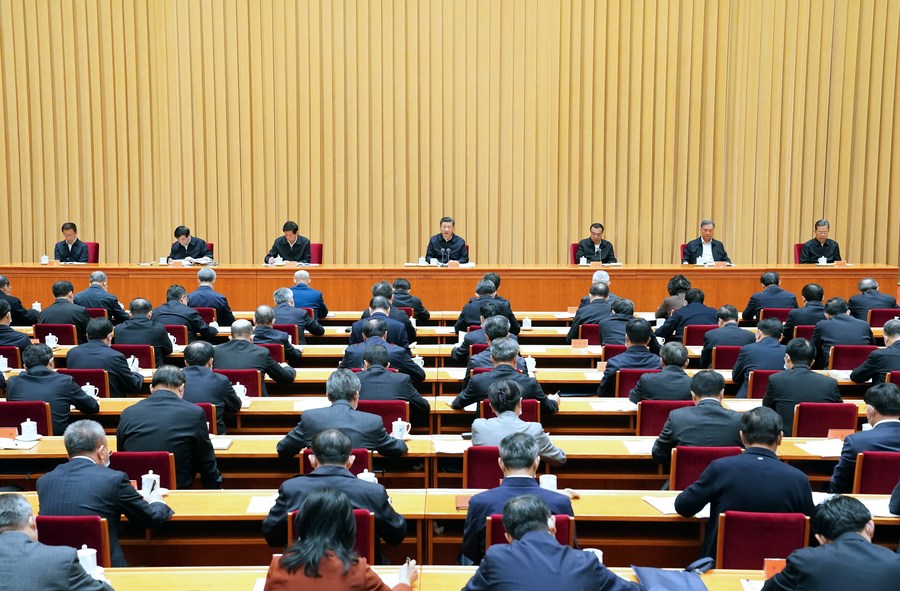 Formed in the course of law-based governance being promoted by the CPC Central Committee with Comrade Xi Jinping at the core after the Party's 18th national congress in 2012, the thought answers major questions concerning why and how law-based governance should be advanced, representing the latest achievement in adapting Marxist theories on the rule of law to the Chinese context.

Under the guidance of the thought, the socialist rule of law with Chinese characteristics is enjoying vibrant development, laying a solid foundation in the pursuit of national rejuvenation.

The CPC has always attached great importance to ensuring that China's governance is based on law.

Since the 18th CPC National Congress, the CPC Central Committee has specifically put forward promoting overall law-based governance, which was incorporated into the four-pronged comprehensive strategy for the country's development.

The fourth plenary session of the 18th CPC Central Committee in 2014 adopted a decision to advance the rule of law.

After the 19th CPC National Congress in 2017, the CPC Central Committee established its Commission for Overall Law-based Governance and made major decisions on promoting law-based governance in all fields. Historic changes and achievements have since then been made in developing the socialist rule of law in China.

In his speech at the November conference, Xi set forth requisites for the current and future work on law-based governance in China. Known as "11 upholds" in Chinese, they embody rich implications of Xi Jinping Thought on the Rule of Law:

-- Staying on the path of the socialist rule of law with Chinese characteristics.

-- Promoting the modernization of China's governance system and capacity along the path of the rule of law.

-- Adhering to a system of the socialist rule of law with Chinese characteristics.

-- Ensuring sound lawmaking, strict law enforcement, impartial administration of justice, and the observance of the law by everyone.

-- Taking a coordinated approach to promoting the rule of law at home and in matters involving foreign parties.

-- Fostering a high-quality team of professionals with both integrity and ability for legal work.

-- Ensuring that leading officials at various levels faithfully implement major decisions and plans made by the CPC Central Committee on overall law-based governance.

As the world undergoes momentous changes unseen in a century, China is in a critical period for realizing national rejuvenation and forging ahead with all-out efforts to build a modern socialist country.