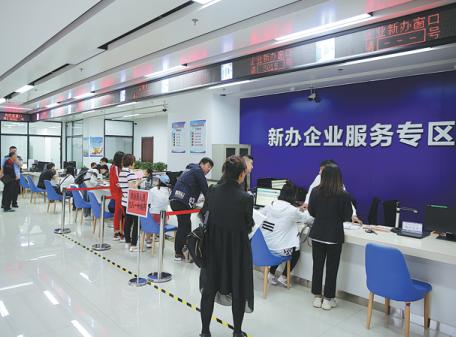 People line up to be served in the zone that deals with new business applications at the administrative center in Dadong district of Shenyang. [Photo provided to China Daily]

BEIJING－There may be more changes to China's business environment than you thought.

The figures speak for themselves.

Foreign direct investment on the Chinese mainland, in actual use, expanded 6.2 percent year-on-year to a record 999.98 billion yuan ($154.72 billion) in 2020, the Ministry of Commerce said on Wednesday.

Even during typical times, achieving all this progress at the same time can be difficult, let alone in a year during which COVID-19 significantly disrupted global business activity, coupled with rising protectionism. This progress also comforted people who still have faith in economic globalization and free trade.

China's strong FDI was in stark contrast to the rest of the world. According to the United Nations Conference on Trade and Development, global FDI dropped by nearly half in the first six months of 2020.

According to a report recently published by global consulting firm EY, German automakers Volkswagen, BMW and Daimler benefited to an "above-average extent" from the market recovery in China as their sales in China in the third quarter increased 9 percent year-on-year.

Ola Kallenius, CEO of Daimler, told Xinhua that the company is eyeing new opportunities in China's rapidly growing market for electric cars, thanks to its economic recovery and the brisk demand for new energy vehicles in the world's largest auto market.

With its 1.4 billion people and over 50 million highly-skilled workers, China is too important a market for foreign capital and multinationals like Daimler to ignore. Official data showed that more than 1 million foreign-funded enterprises had established themselves in China by the end of 2019.

However, foreign doubts and criticism over China's business environment still exist. While some of these are stereotypes, others such as market access restrictions and regulatory barriers have already been improved.

China has been committed to opening its doors wider to the outside world since it launched its reform and opening-up policy more than 40 years ago, especially after joining the World Trade Organization in 2001. As China has become highly connected with the outside world, better service requirements apply to foreign investors.

In the past, China mainly provided "hardware-based incentives" such as providing land and office parks to facilitate foreign investment. Today, in addition to those benefits, China offers more "software-based benefits" to improve its service quality for foreign enterprises, including simplifying approval processes and making more use of big data.

As the first wholly foreign-owned carmaker in China, Tesla delivered the first batch of sedans produced by its plant in China in December 2019, less than a year after its Gigafactory broke ground in Shanghai. Such rapid development was lauded as "Tesla speed".

Without support from the central and Shanghai governments, it would be more difficult for Tesla to build a factory and start mass production and delivery at such a speed, said Allen Wang, general manager of Tesla China.

Besides commercial vehicle enterprises, China has removed foreign ownership caps on sectors like securities, fund management, futures and life insurance, according to the latest version of the negative lists for foreign investment.

Despite China's efforts and achievements in optimizing its business environment, it still takes time for foreign investors to digest the policies.

To ease their concerns, China established an intellectual property court under the Supreme People's Court in 2019 to promote law enforcement and judicial reform. The Chinese leadership has stressed the importance of improving the quality and efficiency of IPR-related trials, enhancing criminal laws and judicial interpretations, and intensifying efforts to crack down on IPR-related crimes.

The ceiling of statutory damages under the copyright law has gone up from 500,000 yuan to 5 million yuan. Based on court decisions in IPR infringement cases, the amount of damages continues to set record highs, thus benefiting the country's fight against IPR infringements, Liu said.

In recent years, it is not rare to see Chinese courts ruling in favor of foreign brands and enterprises in IPR-related lawsuits. Such verdicts include US basketball legend Michael Jordan's name rights disputes, the British Broadcasting Corporation's trademark infringement case and Lego's copyright infringement case.

Also, the use of technology is becoming more common in IPR cases, with wider application of big data, AI and blockchain in copyright registrations and copyright works.

FDI into high-end sectors grew as protections and services were strengthened. Data from the MOC on Wednesday showed that foreign investment in high-tech sectors increased 11.4 percent year-on-year and the high-tech services sector saw its FDI climb 28.5 percent in 2020.

Despite the shadow of the so-called "decoupling" theory and the threat of protectionism, foreign enterprises have recognized China's progress in improving its business environment. According to a survey conducted by the American Chamber of Commerce in Shanghai, 78.6 percent of interviewed enterprises said they would not shift their investments away from China. Some other foreign companies adopted a "China+1" strategy－staying in China while establishing small-scale operations elsewhere.