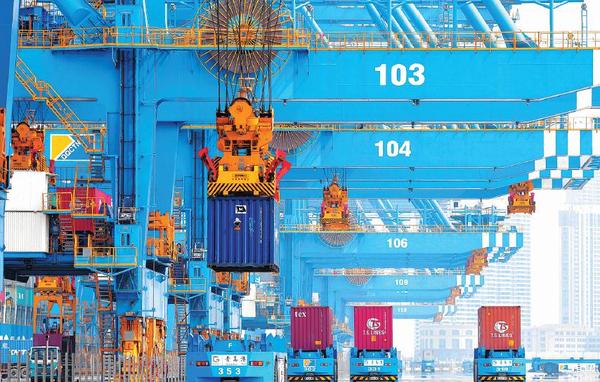 In an article published in Qiushi journal on Tuesday, President Xi Jinping once again emphasized the importance of innovation to modern economy, and said that China should become a global center for science and innovation.

To achieve higher-quality development and become a strong manufacturing power, China needs to more vigorously promote innovation. China has been the largest manufacturing country for 11 straight years, accounting for nearly 30 percent of the global manufacturing output, according to the Ministry of Industry and Information Technology.

As for the country's value-added industrial output, it has reached 31.30 trillion yuan ($4.80 trillion), Minister for Industry and Information Technology Xiao Yaqing said on March 1. And as China's GDP reached 101.6 trillion yuan in 2020, narrowing the gap with the United States, it is likely to maintain its leading position in manufacturing for a long time to come.

The rapid development of manufacturing is one of the important fruits of reform and opening-up, and the foundation of its economic success.

However, China is still far from being a strong manufacturing power. There is an imbalance in supply and demand, and its industrial chains are still at the middle to low end of the global value chains. And since the gap between its high-end industries and other sectors remains wide, China faces an unprecedented challenge in upgrading "Made in China" to "Created in China" and "Intelligent Manufacturing in China".

According to the Fifth Plenary Session of the 19th Communist Party of China Central Committee last year, the world is undergoing unprecedented and rapid changes. Developed countries such as the US are trying to decouple their economies from China's, exerting immense pressure on China's high-tech companies. An apt example is China's semiconductor chips industry, with the United States ban on supply of chips to high-tech giant Huawei and restrictions on many other Chinese companies serving as a warning.

Although the Joe Biden administration is trying to adopt a more sensible approach to Beijing-Washington ties, it still treats China as the US' principal competitor. China's basic manufacturing capabilities are still relatively weak, and the development of its core technologies is dependent on other countries, increasing the risk of the country receiving a serious blow due to external factors. This means China could face many hindrances in fostering high-quality manufacturing.

China is implementing the "dual circulation" development paradigm, in which the domestic market is the mainstay. Although China's aim is to become self-reliant in high-end technology, the moves to accelerate internal economic circulation and pursue self-sufficiency in some crucial technologies do not mean the country is adopting an isolationist strategy. Instead, China remains committed to further opening up its economy to the outside world.

In order to transform China from a big manufacturing country to a strong manufacturing power, the government needs to pursue higher-quality development of the manufacturing sector while boosting internal circulation and integrating the domestic and overseas markets.

During the 13th Five-Year Plan (2016-20) period, high-end industries such as pharmaceuticals, medical equipment, aerospace and telecommunications experienced rapid development and their shares in manufacturing increased. Yet China needs to pay greater attention to low-end manufacturing which is plagued by surplus production capacity, low added value, rising raw material costs, labor shortage and relocation of factories to other countries.

China has lost some of its advantages in mid- and low-end manufacturing due the soaring costs of labor and natural resources. As such, some low-tech manufacturing units have shifted (or are shifting) from China to countries such as Vietnam, Bangladesh, Laos and Cambodia where labor costs are lower, forcing China to transform and upgrade its industrial structure.

So Chinese enterprises should promote technology innovation to meet market demand, and add more value to their products to maintain their position in the global industrial chains. The government, on its part, needs to implement more favorable industrial policies and take measures to ensure the supply of enough workers to the manufacturing sector.

It is therefore important that the implementation of national policies is in line with the needs of the domestic market. Though China faces the challenge of rising labor cost, it still has the world's largest manufacturing system with the most complete industrial chains and supporting facilities thanks partly to efficient and skilled workers.

And while some companies move (or have already moved) their manufacturing units from China to other developing countries, they still need to import critical components from China, which can boost the cross-border flow of capital and goods, and encourage these countries to play more important roles in the China-proposed Belt and Road Initiative.

In general, China's manufacturing industry and strategic emerging industries have been growing well, and the right policies can inject vitality into mid- and low-end manufacturing. In short, the promotion of innovation and upgrading of high-end industries will help China achieve higher-quality development.

The author is head of China Academy of New Supply-Side Economics.