Foreign Investment Not Affected by Law 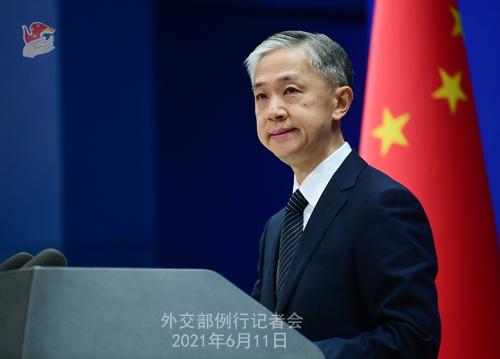 Foreign Ministry spokesman Wang Wenbin said on Friday that the only impact China's newly passed law on countering foreign sanctions will have on foreign investment in the nation, if any, is that the legislation will provide a predictable legal atmosphere and a stable business environment for foreign enterprises in China.

The law was adopted on Thursday at the closing meeting of a session of the Standing Committee of the National People's Congress, China's top legislature. It is aimed to counter unilateral sanctions on China imposed by foreign countries using pretexts including issues related to the Xinjiang Uygur autonomous region, the Tibet autonomous region and Hong Kong.

"China always welcomes and supports foreign enterprises to conduct business and cooperation in China, and their rights and interests are guaranteed in accordance with law,"Wang said.

China looks to expand its opening-up as the country continues to share its development opportunities with the world, the spokesman added.

As for the law, the spokesman said that it was formulated after studying suggestions and proposals from different social sectors, summarizing China's anti-sanctions practices, taking into account related overseas legislation and soliciting opinions from the Communist Party of China Central Committee and central government departments.

"The law reflects the common aspiration of the Chinese people and is also consistent with international law and basic norms governing international relations," Wang said.

On Friday, the spokesman also expressed China's strong condemnation and firm opposition to a British report on Hong Kong, saying the report made groundless accusations against China's Hong Kong policy.

The "six-month report on Hong Kong", published by the British government, as always confuses right and wrong and is full of ideological biases, Wang said.

"Hong Kong is China's special administrative region ... no one cares more about Hong Kong than China's central government," he added.