CPC Has Global Vision and Strong Sense of Responsibility

China advocates peace, development, and cooperation, actively supports multilateralism, proposes building a mutually beneficial future for all mankind, which demonstrates global vision and a strong sense of responsibility of the Communist Party of China (CPC), said Alberto Moreno, president of the Communist Party of Peru (Red Fatherland), in a recent interview with People’s Daily.

The fundamental reason why China has witnessed remarkable achievements in development is that it has embarked upon a unique development path - the path of socialism with Chinese characteristics - under the leadership of the CPC, said Moreno, who noted that the CPC preserves in seeking truth from facts and keeps blazing new trails in a pioneering spirit, which shows its advanced nature. 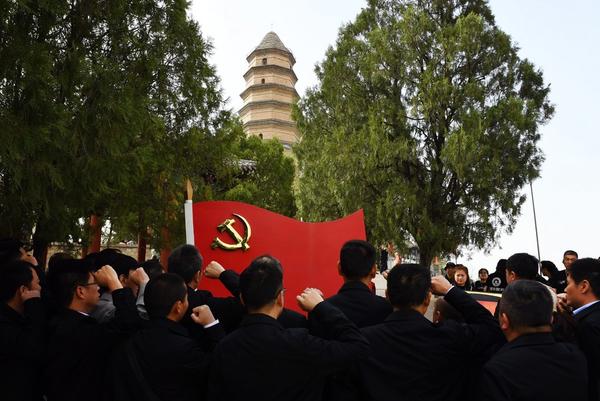 Visitors review the oath of the Communist Party of China at the Baota Mountain in Yan'an, northwest China's Shaanxi Province, April 25, 2019. (Xinhua/Liu Xiao)

At the invitation of Chinese government departments including the International Department of the CPC Central Committee, Moreno has visited China several times and seen in person the development and changes in China. He marvels at the CPC’s governance theory and practice.

Moreno is a senior theorist and revolutionist of Peruvian left-wing political forces, and has written many books on researches into socialist theories and education and training for political party cadres.

In 1966, when Moreno was 25 years old, he visited China at the invitation of the Chinese side for the first time as a young cadre of the Communist Party of Peru.

“I stayed in China for more than half a year and traveled to many places. For the first time, I had close contact with the CPC and the Chinese people, and observed first-hand the practice of the New China in exploring and building socialism,” he said.

At the end of the visit, Moreno’s delegation was invited to meet with Mao Zedong, late leader of the CPC Central Committee as well as the New China. “Comrade Mao suggested that we shouldn’t simply copy the experience of other countries in development, which made me realize that real revolution and construction are unique and creative,” Moreno recalled.

Since it was founded, the CPC has shown great wisdom in overcoming all possible difficulties, correcting mistakes in time, and finding and adhering to the right path, the Peruvian politician pointed out.

Looking back at the century-long journey of the CPC and the over 70 years of history of the New China, Moreno is convinced that only a Marxist political party, which has withstood tests, forged strong leadership, and gained keen insights into China’s history and reality, is able to shoulder the responsibility of building and developing China.

When people visit the Jinggang Mountains in east China’s Jiangxi province, Yan’an city in northwest China’s Shaanxi province, and other revolutionary bases, they may wonder how strong-willed and wise CPC members needed to be to have struggled through such harsh conditions and terrible ordeals in these places and eventually won a victory, Moreno said.

Moreno admires the CPC for always sticking to the original aspiration and winning sincere support of the Chinese people, which he believes is why the political party has survived all kinds of difficulties and threats.

Such a noble and moral political party, which has remained united, acquired comprehensive capabilities, enjoys wide public support, and has strategic vision, deserves the respect of people in all countries, according to him.

Basing all actions on actual conditions is a golden rule of the CPC in solving various problems in different stages, Moreno pointed out, adding that the CPC has fully integrated the fundamental principles of Marxism into its own reality and adapted Marxism to the Chinese context through practice, summarizing experience, reflection and innovation.

Political parties in various countries should learn and draw inspirations from the thought of Xi Jinping, general secretary of the CPC Central Committee, on socialism with Chinese characteristics for a new era, which has not only provided fundamental guidance for the development of socialism with Chinese characteristics under the new circumstances, but also made major contributions to the cause of world socialism, according to him.

Moreno is impressed by Xi’s aspiration to put aside his own well-being for the good of the Chinese people. It is because the CPC has put people first and maintained its close ties with the people that it is able to enjoy an inexhaustible source of strength, he pointed out.

When faced with the sudden COVID-19 outbreak, the CPC and the Chinese government have decidedly prioritized people’s lives and health, made quick decisions and deployment, and mobilized the whole society to fight the virus in an efficient and orderly manner, thus containing the spread of the virus in a short time, said Moreno.

Meanwhile, China has actively provided medical assistance for other countries, and carried out international cooperation on COVID-19 vaccines, making new contributions to building a global community of health for all, which Moreno considers a mirror of the CPC’s philosophy of centering the work around people as well as the embodiment of China’s institutional advantages and governance capabilities.

The world today is troubled by a multitude of global challenges in economy, politics, science and technology, and environment, among other fields, which require global response and solutions, Moreno noted, adding that while some Western countries pursue hegemonism and power politics and have aggravated the turbulence and uncertainties in the international situation, China has proposed building a community with a shared future for mankind, meeting the needs of the times.

“The contacts between the CPC and the Communist Party of Peru (Red Fatherland) have always been based on equality and sincerity. We have learned a lot from the experience of the CPC,” said Moreno, who noted that the CPC never interferes in the internal affairs of political parties of other countries.

He called on both sides to bring into full play the important role of inter-party exchanges and jointly defend national sovereignty, safeguard multilateralism, and promote peaceful development.

It is believed that standing at a new historical starting point, the CPC will lead the Chinese people toward more glorious achievements in reform, innovation, and construction, according to Moreno.