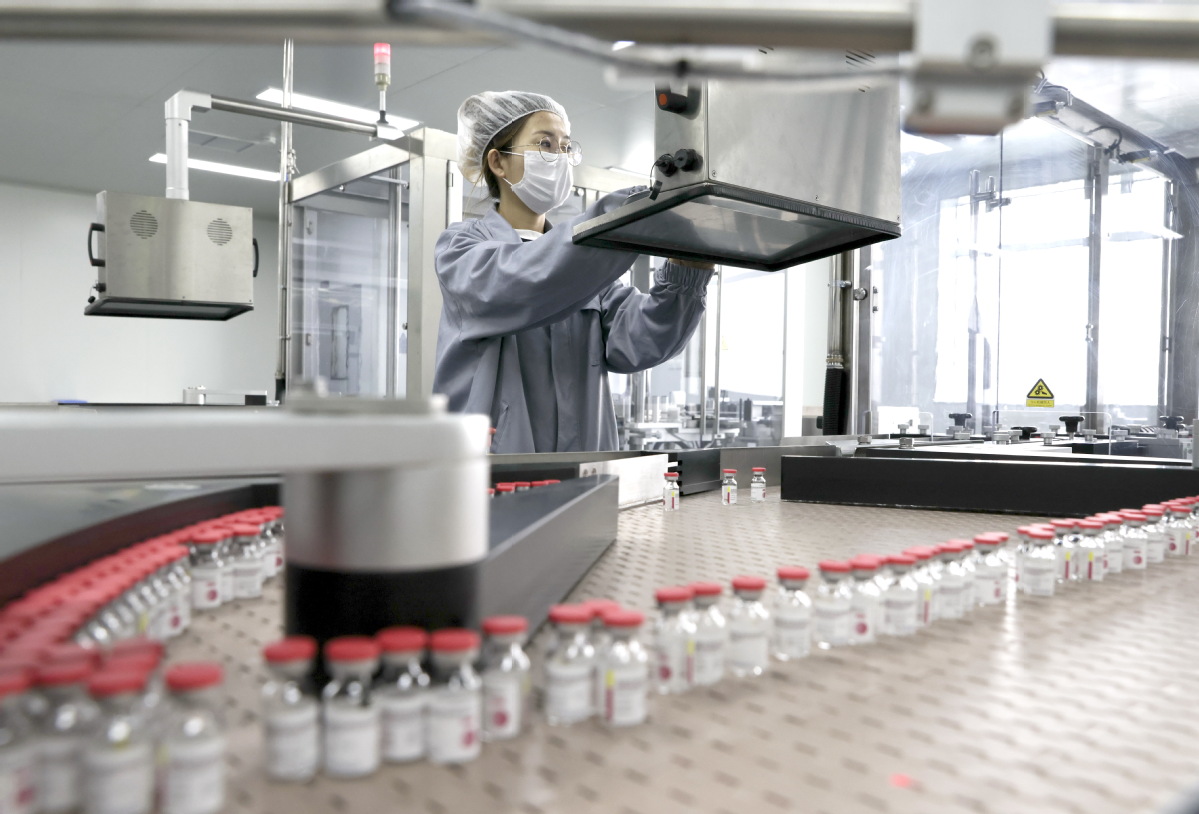 COVID-19 vaccines are being manufactured at a CanSino Biologics factory in Tianjin on April 25, 2021. [Photo by Feng Yongbin/China Daily]

A year ago this month, tech billionaire and philanthropist Bill Gates told fellow donors at the Global Vaccine Summit that to beat the COVID-19 pandemic, the world would need a "breakthrough in generosity" as well as one in science.

Gates said that, when COVID-19 vaccines were ready, "funding and global coordination will ensure that people all over the world will be able to access them".

Exactly 12 months later the worldwide distribution of vaccines is so lopsided that it is fair to say Gates' hopeful call for coordination was not heeded.

Many rich nations now sit on vaccine surpluses so large that they could treat their populations several times over. Around 1.8 billion vaccines have been administered across the globe, and close to one-third of those have gone to people living in the G7 group of wealthy economies, while just 0.3 percent have been distributed in countries classed as low-income, according to Our World in Data.

COVAX, a vaccine aid initiative for equitable distribution in the developing world, sought to deliver 252 million vaccines in the first half of this year, but has shipped just 80 million as of this week.

Chinese vaccines went global several months ago. China has already sent more than 350 million doses abroad, including exports to more than 50 countries and donations to more than 80 countries, according to Zeng Yixin, vice-minister of National Health Commission. The combined annual capacity of Chinese vaccines is expected to reach 3 billion doses this year, said Zheng Zhongwei, a National Health Commission senior official who is coordinating the country's COVID-19 vaccine development projects.

Ricardo Palacios, medical director of clinical research at the Butantan Institute in Sao Paulo, Brazil, said that the nature of the two vaccines makes them ideal candidates for distribution in the developing world.

"There is a huge need for COVID-19 vaccines worldwide, and inactivated vaccines, like those from Sinovac and Sinopharm, are among the safest and easiest to handle," Palacios told China Daily.

The Sinopharm and Sinovac vaccines, made using long-standing technology, can be stored at normal refrigeration temperatures for long periods, unlike the mRNA vaccines from Pfizer and Moderna, which require ultracold storage.

"Those characteristics are particularly important in low- and middle-income countries, where the distribution of the vaccine has been limited in comparison to other countries," Palacios said. "The WHO validation of both vaccines will allow more countries to get the benefit of safe and effective vaccines to control this disease."

Palacios led a recent study in Brazil, known as Project S, which highlighted the ability of the Sinovac vaccine, known as CoronaVac, to bring outbreaks under control. Over the course of the spring, the Butantan Institute coordinated the vaccination of 95 percent of the adult population of Serrana in southern Brazil.

A commuter town with high traffic in and out of the city, Serrana had suffered sustained outbreaks earlier this year, when 5 percent of residents were infected.

After widespread inoculations with the CoronaVac vaccine, the number of symptomatic cases declined by 80 percent reduction. The study, published on June 1, found that mortality fell by 95 percent and COVID-19-related hospitalizations fell by 86 percent. Palacios said his team could tell the program was working even before it reached completion, and the incidence of the disease fell markedly in the unvaccinated group when vaccine coverage reached around 70 percent.

"The effectiveness of CoronaVac on the populations where this vaccine has been used is a ray of hope guiding a way out of this public health emergency," Palacios said. "The results from our study in Serrana were particularly outstanding in terms of the increased effectiveness due to the collective immunity elicited by the large scale vaccination with CoronaVac."

The study of 40,300 participants in the United Arab Emirates and Bahrain found one vaccine-developed by Sinopharm subsidiary China National Biotech Group and the Wuhan Institute of Virology-was 72.8 percent effective at preventing symptomatic infection. The other vaccine-made by Sinopharm and Beijing Institute of Biological Products-was 78.1 percent effective. The latter vaccine was listed for emergency use by WHO last month, meanwhile China National Biotech Group has registered an application for WHO for an emergency use listing.

"The overall efficacy is not as great as was seen in the mRNA vaccine trials but is still very good and well above the target level of 60 percent efficacy-even 50 percent could be valuable in a pandemic," Stephen Evans, a professor of pharmacoepidemiology at the London School of Hygiene and Tropical Medicine who was not involved in the study, told China Daily.

Pan An, a professor of epidemiology at Huazhong University of Science and Technology, who was involved in the study, said that both of these vaccines are well-suited to combating the pandemic, especially in poorer regions.

"These inactivated vaccines also have the advantage of being easily stored and shipped in 2 to 8 degrees Celsius for years, making them suitable for many developing countries and places with limited cold storage capacity," Pan told China Daily. "China is supplying more and more vaccines to the global market and contributes to the global fight against the pandemic."

The trial involved mostly younger men, so it could not provide an accurate look at the vaccines' ability to prevent severe disease. Pan said Phase III trials involving more at-risk groups are already underway, meanwhile real-world data from national health authorities suggests that Sinopharm vaccines are likely to have a protective effect in older people.

Sinopharm vaccines are already widely in use in countries whose own authorities granted approval ahead of the WHO. And the publication of such "robust "late-stage trial data will provide a further boost of confidence in the treatments, said Andrew Catchpole, chief scientific officer at London-based vaccine testing laboratory hVIVO.