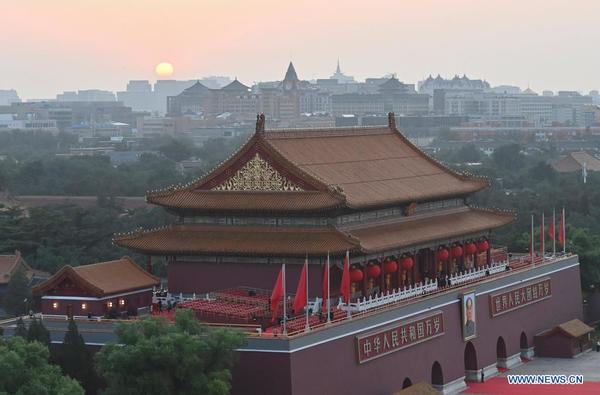 As the Communist Party of China celebrates the 100th anniversary of its founding, it presents the world with an opportunity to understand how it has led China to where it is today and how its governing philosophy relates to both the nation and the rest of the world.

A grand gathering to celebrate the centenary is being held in Beijing on Thursday, at which Xi Jinping, general secretary of the CPC Central Committee, will deliver a speech on the Tian'anmen Rostrum, where Mao Zedong declared the founding of the People's Republic of China on Oct 1, 1949.

Xi, who is also China's president and chairman of the Central Military Commission, has said, "To understand today's China, one must understand the CPC."

Observers said that the CPC, as the world's largest Marxist ruling political party, with more than 95 million members, will use the anniversary as a historic opportunity to enhance mutual understanding between China and the world.

Although some Western scholars, policymakers and commentators on China have made the same self-assured prediction that the CPC would go the way of the now defunct Communist Party of the Soviet Union, the CPC nonetheless continues to remain firmly in place and is broadly supported by the Chinese people, said Jon R. Taylor, a professor of political science and chair of the University of Texas at San Antonio's department of political science and geography.

"Despite the myriad challenges from its humble beginnings in 1921 until today, the Party has proven time and again its durability in the pursuit of developing a modern and successful China," Taylor said.

"It's that resilience, flexibility and ability to adapt to changes that provides it with the means necessary to maintain long-term sustainability as China's ruling party," he added.

The CPC, established in July 1921, has united and led the Chinese people to make steady progress toward prosperity. Under the Party's strong leadership, China has secured long-term economic growth and social stability while actively participating in global governance in an open, inclusive and cooperative manner.

It has close communication and exchanges with more than 560 political parties and organizations from more than 160 countries and regions, forging an all-around interparty global partnership network in broad fields, according to the International Department of the CPC Central Committee.

Over the past century, the CPC has made historic achievements in China's development and national rejuvenation, which have turned the country into an increasingly important player in world affairs, said John Ross, former director of economic and business policy for the mayor of London.

The fact that China has been approaching the center of the international arena implies that the CPC will not only matter to China's future, but also have greater relevance for the future of the whole of mankind, said Ross, who is currently a senior fellow at the Chongyang Institute for Financial Studies at Renmin University of China in Beijing.

More than 150 heads of state and government as well as more than 200 leaders of political parties from around the world have sent congratulatory messages to China ahead of the centenary of the CPC's founding, officials from the International Department of the CPC Central Committee said.

Sadyr Zhaparov, president of Kyrgyzstan, said in a message that China, under the leadership of the CPC, always pursues an independent foreign policy of peace, which has played a key role in promoting the cause of human progress, Xinhua News Agency reported.

Xi's vision of building a community with a shared future for mankind is of great significance, he said, adding that the idea gives the direction for human development and progress, and has won wide recognition from the international community.

Xi has said on many occasions that the purposes of China's foreign policy are to uphold world peace and promote common development, and the country is willing to expand areas of converging interests with other countries and advance the building of a new type of international relations, featuring win-win cooperation, as well as the building of a community with a shared future for mankind.

Xi's vision of building a community with a shared future for mankind, which constitutes the core principle of the CPC's foreign policy, is a clear expression rooted in classical Marxism but has been developed by the CPC, said Ross, the Renmin University senior fellow.

In a globalized world, a country's development is inevitably interdependent with other countries, Ross said, so countries with different systems need to work together to cope with threats facing humanity, such as climate change, the COVID-19 pandemic and global economic recession. The concept of building a community with a shared future for mankind provides a crucial solution for dealing with such challenges, he added.

Radhika Desai, a professor of political studies at the University of Manitoba in Canada, said in a recent interview with haiwainet.cn, a portal of People's Daily Overseas Edition, that many countries consider developing cooperation with China greatly beneficial to them based on the fact that China offers a huge market.

However, the significance of the CPC's success to the world goes far beyond that, Desai said, and the CPC has also set a good example for governance of a country. China's success in curbing the pandemic has again demonstrated its institutional advantages, she added.

May Zhouin Houston contributed to this story.