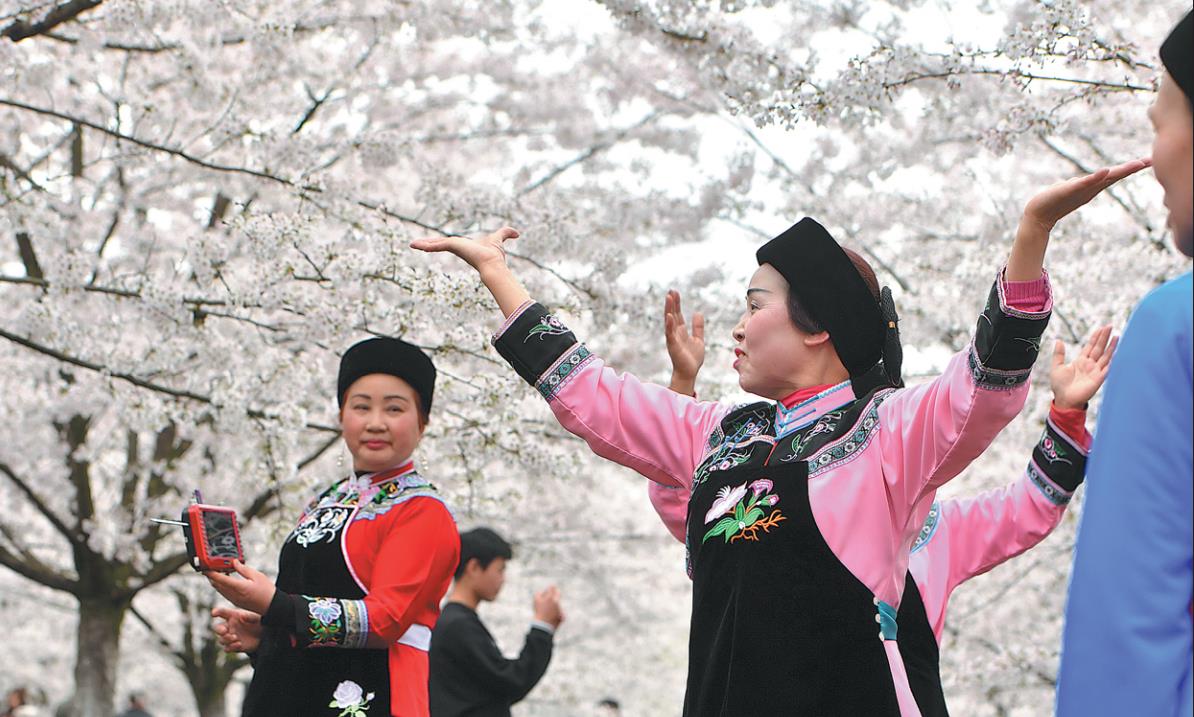 The celebration of the centenary of the Communist Party of China on Thursday marked a historic achievement for mankind, as the world's most populous nation has built itself into a "moderately prosperous society in all respects".

Experts said that under the leadership of the CPC Central Committee, led by General Secretary Xi Jinping, the hard-won success marks a watershed in the nation's "three-step" modernization drive. The plan was rolled out 34 years ago with the aim of making a "great modern socialist country" out of a largely agrarian China over a span of about 70 years.

The accomplishments were also a boon to global development and human rights protection, they added.

"The success is a milestone as China modernizes," said Ni Degang, a researcher on Marxism in Beijing. "It has cemented the foundations for constructing a modernized socialist country."

He added that over the past 70 years, China has achieved what the West did over three centuries, which he described as "a marvelous leap".

The Party's leadership has played a central role, while the devotion and hard work of 1.4 billion Chinese has also been indispensable, he noted.

Dong Zhenhua, a professor of Marxist philosophy at the Party School of the CPC Central Committee in Beijing, said that underpinning the miracle is China's political system, which allows the Party to make development plans decades ahead and concentrate the nation's attention and resources on tackling the most pressing issues.

In some other countries, plans "may not be the same in the morning and at night, but in China, that's impossible," he said.

The 16th National Congress of the CPC, held in 2002, called for a continued push to build a moderately prosperous society in all respects in the first 20 years of the 21st century.

By the time Xi became general secretary of the CPC Central Committee and president about a decade later, China had emerged as the world's second-largest economy with a burgeoning consumer market.

That laid a solid foundation for the Party to lead the country to achieve the goal of building a moderately prosperous society in all respects before the CPC's 100th birthday.

In recent years, the target led to ramped-up efforts to curb rural poverty, pollution and corruption－issues that had to be addressed before China could be categorized as a moderately prosperous society in an all-around way, experts said.

Wu Haitao, a professor at Zhongnan University of Economics and Law in Wuhan, Hubei province, and an expert on poverty reduction, said the issues of poverty, pollution and corruption had been in the authorities' crosshairs since 2012 as the country moved to achieve a moderately prosperous society in all respects.

By delivering the goal as promised, the Party has demonstrated that the Chinese path, theory, political system and culture all work, he said. "In addition, the CPC has defended and promoted the development of socialism worldwide and injected new momentum into the global socialist cause and mankind's development," he noted.

Chang Jian, director of the Human Rights Research Center at Nankai University in Tianjin, said the decadeslong efforts to keep the promise has helped promote a wide range of basic human rights deemed crucial to people's survival and development, such as better access to food and drinking water, safe homes, health and social security.

He said many of the areas have been tracked by the poverty relief authorities to prevent perfunctory poverty alleviation. "Improvements on these fronts have laid the foundations for the protection of other higher-level human rights," he said.

The concept of a moderately prosperous society, known as xiaokang in Chinese, first appeared in The Book of Songs, a series of folk poems collected from around China between the 11th and sixth centuries BC.

The term describes an ideal society that is stable, affluent and secure, as desired by Chinese people for centuries. It entered politics through leader Deng Xiaoping in 1979, when Masayoshi Ohira, the Japanese prime minister, visited China.

Deng used the phrase to describe his prescription for China's modernization, which he said would be different from Japan's approach.

"Since then, xiaokang has become more frequently used in Party documents," said Liu Dongchao, a researcher on socialism with Chinese characteristics at the Party School of the CPC Central Committee.

For decades, the central authorities had promoted the development strategy called the "Four Modernizations", which referred to industry, agriculture, defense, and science and technology.

However, it faced many developmental difficulties in the 1960s and '70s, and almost 800 million Chinese remained in poverty by the late 1970s.

"Xiaokang is culturally Chinese, so it resonated more with the then-largely rural Chinese majority," said Dong, the Marxist philosophy professor, adding that the term embodies the dream of the Chinese nation and also has strong appeal in terms of both politics and civil society.

The merits of xiaokang as a political term soon led to it becoming a central plank of China's all-important "three-step" modernization plan, which was unveiled at the CPC's 13th National Congress in 1987.

Designed by Deng, the plan aimed to double GDP between 1980 and 1990; double the number again in the following decade to make China a moderately prosperous society; and see the nation become fully modernized by 2050.

At the time, China's annual GDP was the sole bench mark for tracking progress toward the building of a moderately prosperous society. However, that began to change at the start of this century, after the figure surpassed the $1 trillion mark in 1998.

At the CPC's 16th National Congress, the central authorities announced that China had hit the GDP target set by Deng's modernization plan for a moderately prosperous society. However, the development was uncomprehensive, uneven and of low quality.

As a result, the gathering called on attendees to strive for a better version of xiaokang in the first two decades of the new century, so the development benefits could be shared equally by all Chinese people.

To that end, rather than simply boosting the economy, more wide-ranging efforts would be needed. The old development model had put China on a fast track, but some growth had been achieved at the expense of the environment.

More recently, the focus was expanded to include targets ranging from rule of law, cultural prosperity and ecological civilization－a concept promoted by President Xi for balanced, sustainable development that highlights the harmonious coexistence of mankind and nature.

Liu, the Party school researcher, said the evolution of the definition of xiaokang is a reflection of China's fast-growing social productivity, technological prowess and public wealth.

Dong, the Marxist philosophy professor, said that even though the term "xiaokang" was used two decades ago, society was still grappling with unbalanced development and many people could only meet their basic life needs.

Considering ways to address this imbalance, Xi said: "This is a society to be enjoyed by each and every one of us. On the march toward common prosperity, no one will be left behind."

One notable endeavor of the central authorities was the detailed action plan to include everyone in the nation's fledgling social safety net, irrespective of their ethnic group or physical condition.

Du Shuangqing, a resident of Gansu province, which was once home to some of the country's poorest families, was one of the beneficiaries of the improvements.

In 1988, Du was born into a poor farming family in mountainous Longnan city. At age 9, he lost his right arm in a rockslide, which resulted in medical expenses his family was unable to meet.

The 33-year-old, who works for the local disabled people's federation, recalled wearing his two older sisters' clothes throughout primary school to reduce the financial burden on his parents.

He said he would have dropped out of school had it not been for government allowances designed to help poor students.

"Our grain harvest was usually small and my parents had too many children to support. Back then, life was really hard," he said.

In recent decades, China's fast-growing economy has helped pull tens of millions of rural residents out of poverty by creating new jobs and bolstering the infrastructure in the countryside.

However, by 2012, almost 100 million rural residents were still grappling with absolute poverty－a decade after the Party embarked on building a better version of the moderately prosperous society.

Moreover, the smog that shrouded urban skies was coming under greater scrutiny, underlining the environmental cost of the previous development model.

Poverty and pollution were among the most pressing issues as the CPC worked to finish the last mile to hit the xiaokang target, said Wu, the professor at Zhongnan University of Economics and Law.

The situation prompted the central authorities to redouble efforts to tackle poverty via increased State funding, tailored programs and the deployment of capable people in administrative positions.

In February, Xi announced that China had secured a "complete victory" in its fight against poverty by lifting 98.99 million rural residents out of absolute poverty since late 2012.

The number of Chinese who escaped poverty in the past four decades accounted for more than 70 percent of the world's impoverished people during that period, measured by the poverty threshold set by the World Bank.

Du, the Gansu resident who is also a poverty relief official, said that in recent years local authorities had invested tens of millions of yuan to build a road linking his secluded village with the outside world, even though it is home to just about 40 families.

"The CPC prioritizes people's interests over economic considerations," he said, adding that the dropout rates at local schools were near zero, with more students going to key colleges thanks to a campaign of investment in education to break the cycle of poverty.

His observation was only a small reflection of China's new poverty alleviation paradigm, which has been more targeted and accurate.

Yan Yong is Party chief of a once-impoverished village in Yunnan province, home to a mosaic of ethnic groups who lived a "slash-and-burn" lifestyle until recently.

He said paved roads have cut the journey time to a nearby township from about four hours to just 20 minutes, benefiting the local sugar cane industry, which was introduced as part of the local anti-poverty drive.

In addition, local governments have built sturdy homes so rural residents no longer have to worry about bad weather and are able to focus on farming.

"We have good natural advantages for the development of tourism and we're planning to build a hot spring resort so locals will not need to travel far to find jobs," Yan said.

Since the 18th CPC National Congress, the central authorities have also reinforced the push for greener development.

Xi has said: "We cannot say that moderate prosperity has been achieved while environmental quality remains poor. Otherwise, this statement would not win the people's approval or stand the test of time."

Environmental conservation has been added to the Party's blueprint for the overall construction of a socialist country, extending the four previous areas of focus: the economy; politics; culture; and civil society.

Huang Minxuan, 30, works for an internet company in Beijing. After the city's air quality improved markedly in recent years, he started jogging outdoors in 2018.

At first, he wore a face mask when he ran because the air quality index fluctuated, but such protective measures are now redundant.

"For us regular people, xiaokang is more about a better environment and a more colorful life," he said.

Li Yingqing contributed to this story.