TCM Spreads Its Wings across the Globe 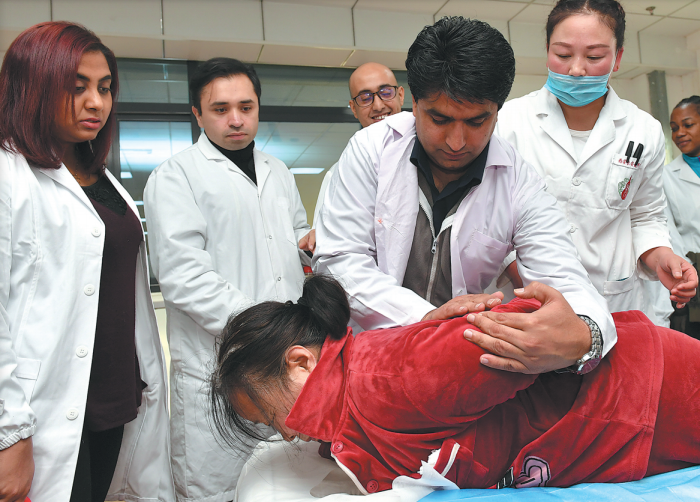 Ancient form of medicine shared with many countries and regions

When Arvin Kuipers asks his patients to stick out their tongue so he can diagnose their ailments, many of them are confused.

The 30-year-old, who practices Traditional Chinese Medicine in Amsterdam, capital of the Netherlands, said: "In TCM, I need to do face and tongue diagnosis. That's strange for people in my country. They ask me, 'What are you doing?'"

Diagnostic methods for TCM are so different from those used in Western medicine that many people in the Netherlands and other countries－even patients with some knowledge of the subject－can have difficulty understanding what is happening.

One elderly woman had been visiting Kuipers occasionally for consultations, but her first encounter with TCM surprised her.

"She had never experienced acupuncture or any other TCM treatment. She came in, and I examined her face and tongue. I told the patient her kidneys were not doing well and that she wasn't getting proper sleep," said Kuipers, who graduated from Beijing University of Chinese Medicine in 2017 and loves Chinese culture.

The woman was shocked and asked the doctor if he was spying on her.

"As she had been sleeping very lightly, she thought I was some kind of magician," Kuipers said. "Actually, it was easy to diagnose her condition when I saw the dark rings under her eyes. Her energy levels were also very low at the time."

Kuipers opened his TCM clinic in September, when the first wave of COVID-19 cases in Europe had eased.

Most of his work involves performing acupuncture, cupping and tuina－TCM massage that patients in the West like the most, he said. In some cases, he also prescribes traditional herbal medicines.

Kuipers usually makes a cup of Chinese tea to calm his patients if they are a little nervous of the acupuncture needles. He also explains the meridian system－a key concept of TCM－yin and yang, and other concepts to them, "so that they know a little of what I'll be doing", he said.

In TCM, good health requires balanced yin and yang, so practitioners not only pay attention to a patient's ailment, but also to his or her overall physical condition, Kuipers said. He added that TCM is also a different culture and offers a new perspective, instead of being a curing method.

He has gradually made "a good connection" with his patients as the treatment helps them. More people are visiting his clinic for their pain to be eased, bad skin conditions cured, or when they feel their energy levels are low.

As of early April, when the Netherlands again eased anti-pandemic restrictions, Kuipers had treated more than 200 patients, many of whom come to his clinic every week.

"People in my country are becoming more interested in TCM. It's also very interesting and pleasantly surprising that acupuncture is quite popular－not just among city dwellers but also with people who live in the countryside," he said.

According to a XinhuaNet report, more than 13,000 foreign students come to China to learn the ancient form of medicine every year.

On June 7, a report from the National People's Congress Standing Committee showed that TCM had been introduced to 196 countries and regions, with over 30 TCM centers being established overseas.

Pan Ping, director of the academic department at the World Federation of Chinese Medicine Societies, or WFCMS, said TCM has become increasingly popular abroad in the five years since the first overseas TCM center was built. By the end of last year, more than 1 million foreigners had received treatment at such centers, he added.

Most of the centers are in countries and regions that are home to a large number of people of Chinese descent, including some European nations, Southeast Asia and the United States, Pan said.

"TCM did not take root in these countries in a day. It has spread overseas along with the footprints of Chinese immigrants over the past few centuries and has proved its value. In recent decades, internationalization of TCM has also accelerated," Pan added.

This progress was illustrated by the purple cupping circles on the back of US swimmer Michael Phelps during the 2016 Olympic Games in Rio de Janeiro, Brazil. Leading international figures have also reportedly had such treatment, sparking strong interest in TCM in the West.

The popularity of TCM can be traced back more than 40 years, when China launched reform and opening-up. It was also when Harish Chandra Shah, the first TCM practitioner in Nepal, visited Beijing to study Chinese medicine.

He spent six years at Beijing University of Chinese Medicine, where he studied TCM internal medicine for four years and acupuncture for two years.

Graduating in 1984, Shah returned to Nepal, where he has dedicated himself to TCM ever since. This was not easy at first, as the treatment was a new concept in his country, where its efficacy was questioned.

"I didn't care what other people said. I just did my job as a doctor and treated my patients. TCM would speak for itself after diseases were cured," said Shah, who has written many articles for newspapers and academic publications on the introduction of TCM in Nepal.

Gradually, TCM has been accepted in Shah's country, with more people seeking treatment at his clinic.

This boom has also prompted TCM education, with medical schools in Nepal integrating TCM-related courses into their curriculums since 1998.

In 2012, Shah became director of Nardevi Ayurveda Hospital in Kathmandu, capital of Nepal, until he retired in 2017. The 64-year-old also headed a TCM research center in Kathmandu, at which he and his colleagues carried out a great deal of research.

"Chinese medicine plays an irreplaceable role in many respects, such as alleviating pain. It is also highly suitable for Nepal, especially in rural areas, where modern medical science is not accessible to everyone. TCM treatments, particularly acupuncture and moxibustion, are the best alternatives," Shah said. (Moxibustion is a therapy which consists of burning dried mugwort on particular areas of the body.)

Shah recalled an accident that happened 43 years ago, which prompted his idea to promote acupuncture in Nepal.

On a crisp afternoon in March, 1978, when he was studying Chinese at Beijing Language and Culture University, a car crashed into a tree on the campus, with the woman driver losing consciousness. Shah and other students quickly gathered at the scene of the accident.

A doctor from the university's health center performed acupuncture on a small indentation just below the woman's nose. Shah was amazed when she quickly regained consciousness.

"It was so impressive that I can still remember every detail, which provided me with inspiration", he said. "Nepal is a mountainous country where hospitals are far from people living in remote areas. Acupuncture and many other TCM treatments could be used as first aid before patients were admitted to hospitals.

"After returning to Nepal, I proposed this idea to the health authorities and helped train some doctors in acupuncture, which has become a popular therapy in my country."

Acupuncture is also practiced widely around the world. According to the World Health Organization, 103 member states have approved the practice, along with moxibustion; 29 member states have introduced special regulations on traditional medicine; and 18 have included acupuncture and moxibustion treatment in their medical insurance coverage.

Tang Minke, director of the international exchange and cooperation department at Beijing University of Chinese Medicine, said, "People like Shah are the pioneers and backbone of taking TCM to a broader stage at a fast pace since China's reform and opening-up.

"Such exchanges not only enable people overseas to realize the good curative effects of Chinese medicine, they also promote its development and internationalization."

According to a white paper released by the State Council Information Office in June last year, TCM has been used to treat 92 percent of confirmed COVID-19 cases in China. Over 90 percent of such cases in Hubei province received TCM treatment that proved effective.

TCM has further expanded its global presence by helping to combat the pandemic.

According to the National Administration of Traditional Chinese Medicine, China has shared TCM therapy, effective prescriptions and clinical experience with more than 80 countries and regions dealing with COVID-19.

To meet demand among overseas physicians for COVID-19 to be treated with TCM, the WFCMS has translated treatment protocols for the disease into more than 10 languages and shared anti-pandemic experience via livestreaming－garnering more than 1 million views.

Lianhua Qingwen capsules and granules－a recommended TCM treatment for COVID-19－have received marketing approval in more than 10 countries and regions and have also been donated to several other nations.

Zhang Qi, head of the Traditional and Complementary Medicine Unit (TCM) in the WHO's service delivery and safety department, said 369 studies on the treatment of COVID-19 using traditional medicine have been registered on the organization's clinical trial registration platform, with more than one-third of them related to TCM.

Pan said: "TCM has demonstrated its unique advantage in reducing the fatality rate and improving the recovery rate. The novel coronavirus pandemic provides a new opportunity for TCM to go global.

"But there is still a long way to go. Standardization is the key to going abroad, including standards for diagnosis and treatment, as well as medicine placement and processing. TCM talent is also in great demand."

In the Netherlands, Kuipers has full confidence in the use of TCM.He has drawn up a working plan with his father, who practices Western medicine.

They sometimes treat patients together. The father refers his patients to Kuipers, and the pair discuss the organ that TCM should focus on－the liver or the lungs.

"It's working very well, especially with elderly patients who have cancer or other incurable diseases. TCM can make them feel better and keep them as comfortable as possible. It's not about curing the cancer, but health maintenance," Kuipers said.

He said TCM will be used for many more tasks, including cosmetic acupuncture, which works mainly by smoothing away facial wrinkles, enabling the skin to appear young.