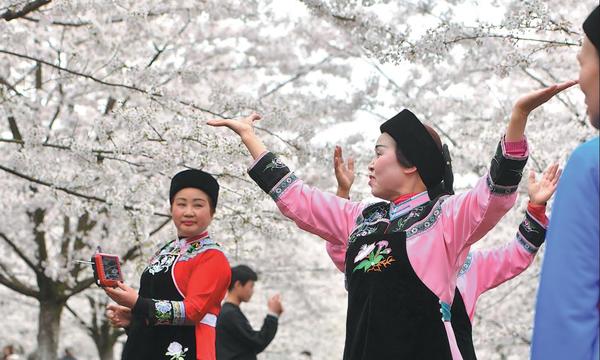 Women from the Bouyei ethnic group dance in a garden in Anshun, Guizhou province, in March. [Photo by Qiao Qiming/for China Daily]

Foreign leaders and diplomats hailed the Communist Party of China's people-centered philosophy, which has led to the country's remarkable achievements, at a virtual gathering on Tuesday attended by representatives of 500 political parties and organizations from more than 160 countries.

As the world faces tremendous challenges, including the COVID-19 pandemic and climate change, the CPC's successful experience brings new vigor and hope beyond China's borders, they said.

In a keynote speech addressed to the CPC and World Political Parties Summit, Xi Jinping, general secretary of the CPC Central Committee and Chinese president, urged political parties to set the right course forward and shoulder their historical responsibility to ensure the people's wellbeing and the further progress of mankind. 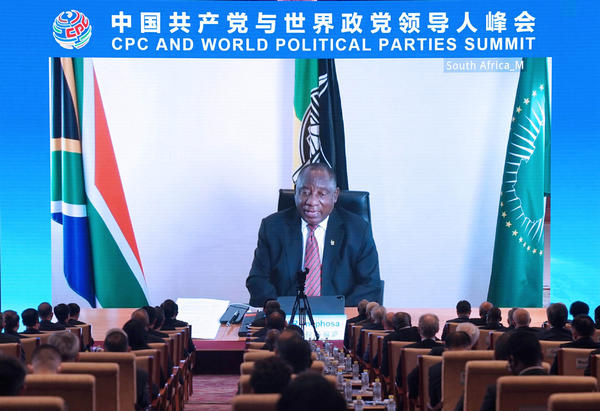 Cyril Ramaphosa, president of the African National Congress and South African president, delivers a speech at the the CPC and World Political Parties Summit via video link, July 6, 2021. [Photo/Xinhua]

Cyril Ramaphosa, president of the African National Congress and South African president, congratulated the CPC on the realization of its first centenary goal－building a moderately prosperous society in all respects.

He said the historic achievements of the CPC have been made possible because the CPC has placed the needs and interests of the people at the center of its work.

"We wholeheartedly endorse the statement by President Xi Jinping that 'the people are the true heroes, for it is they who create history'," Ramaphosa said.

Imran Khan, chairman of the Pakistan Tehreek-e-Insaf party and prime minister of Pakistan, said the CPC has remained committed to serving the people and prioritizing their well-being and interests.

"The CPC has proved that attainment of political power is primarily meant for bringing a transformation in the lives of people and making them masters of their destiny," Khan said.

He praised China's remarkable achievements in poverty alleviation, its anti-corruption campaign and nation-building under the leadership of the CPC.

"It's something that we hope to emulate in Pakistan," he said.

The speech can help political parties to reflect upon what kind of responsibility they should take, he said, calling on parties to strengthen cooperation and promote economic and social development in a bid to bring benefits to all the people.

Aleksandar Vucic, president of the Progressive Party of Serbia and Serbian president, said that the great creativity the CPC showed in the process of building the country has brought inspiration and hope to all countries in the world.

As the world faces unprecedented challenges, Vucic said, mutual respect, mutual help, reaching consensus through consultation and close cooperation have become more urgent than ever before.

Keshavarz Zadeh, Iran's ambassador to China, is one of the representatives of 130 diplomatic missions in China who attended the summit in Beijing.

Zadeh said China's great achievement in poverty alleviation under the CPC's leadership is admirable because people in places of Africa, Latin America and Asia are still suffering from poverty.

"We should promote cooperation among countries, especially among South-South countries, to reach a level of prosperity and development," he said.

Mahbub Uz Zaman, ambassador of Bangladesh to China, fully agreed with Xi's remarks on international cooperation, saying that the Belt and Road Initiative, which involves 140 countries, including Bangladesh, is a model of such cooperation.

"Under the BRI, a lot of infrastructure projects－like roads, bridges and ports－have been built, and these are public goods that everyone benefits from," he said.

The summit, themed "For the People's Well-Being: The Responsibility of Political Parties" and attended by more than 10,000 people worldwide via video link and live webcasts, was the first of its kind.

All political parties that are responsible and have ideals should work for people's well-being, and the CPC is taking the lead in this regard, Chen told the media outlet Shanghai Observer.