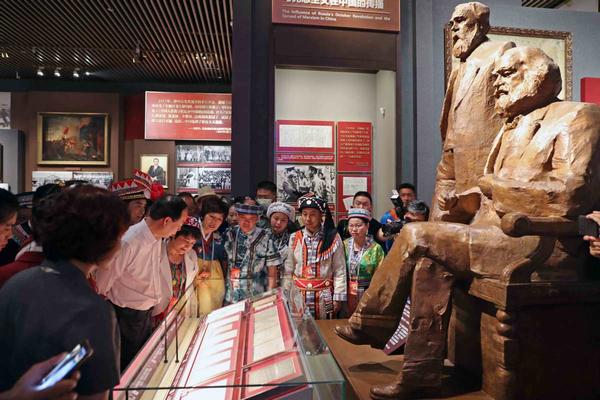 Ethnic groups view an exhibition on the Communist Party of China's history at the Museum of the CPC in Beijing, on June 30, 2021. [Photo by Wang Zhuangfei/chinadaily.com.cn]

More than 40,000 people from every walk of life have visited the Museum of the Communist Party of China since its opening last month to understand more about the journey of the CPC over the past century.

Since June 19, the day after its inauguration, the museum in Beijing's Chaoyang district has attracted visitors from various sectors, including government agencies, enterprises and colleges, according to the museum.

On July 4, some 100 Party members from the Supreme People's Procuratorate, the country's top prosecuting authority, visited the museum, a site devoted to permanent and comprehensive exhibitions about the CPC's history.

They said the visit was a lively class to help understand the Party and its history, and they were cheered up and more confident about the future after viewing the exhibition displaying the historical, theoretical and social logic of China's development in the past 100 years

Cheng Wen, from the Supreme People's Procuratorate's General Office, said, "I had a deep understanding of our Party's greatness and glory at the exhibition, which also reminded me of my promise on becoming a prosecutor－being loyal to the Party and working hard for the people."

Huang Bo, another prosecutor from the Supreme People's Procuratorate, said the displays in the museum impressed him a lot as they showed how difficult the founding of New China was and how socialism with Chinese characteristics was established.

"Their hardship also encouraged me, urging me to try my best to let every citizen feel the justice in every case," he added.

Before representing the Chinese Communist Youth League to salute the Party and expressing its commitment to the Party's cause at a ceremony marking the CPC's centenary on July 1, Feng Lin, from Communication University of China, went to the museum to enhance her awareness.

"Through the visit, I better understood that today's happy life hasn't come easily," she said.

The groundbreaking ceremony of the museum, near Beijing Olympic Park, was held in August 2018, and construction work, involving nearly 50,000 people, began a month later.

The museum will accept online appointments for free visits from Thursday. As required by COVID-19 prevention measures, the daily visiting capacity will be limited to 3,000.