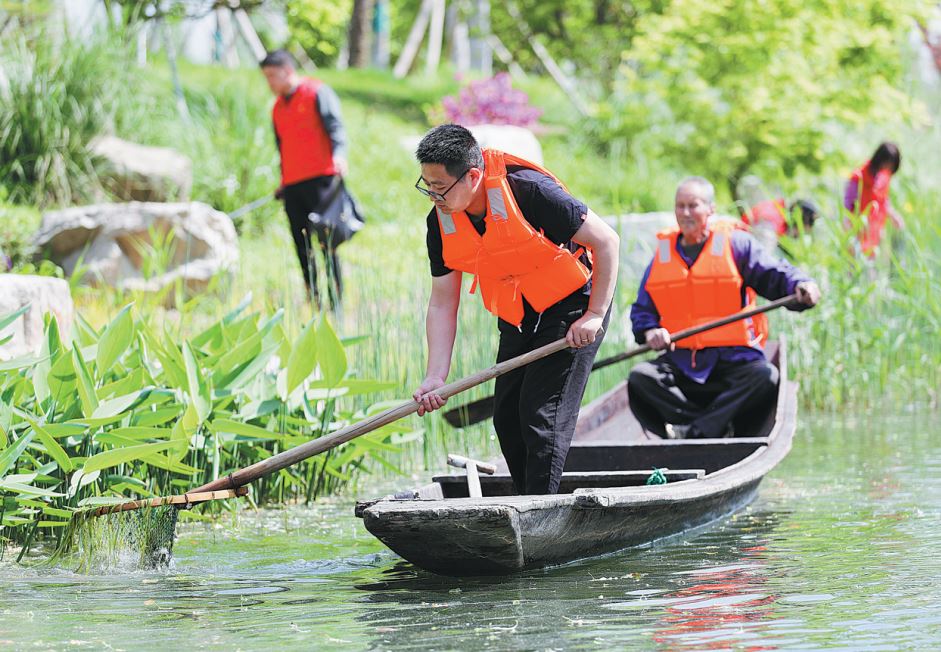 Despite having only a vague understanding of ecological civilization nine years ago, Luo Yi had no hesitation in accepting a part-time job as a Chinese-English translator at a forum in the United States dedicated to the concept.

At the time, Luo, a freshman majoring in history and environment at Claremont McKenna College in California, simply wanted to make some money. "I earned a lot from the forum," she said.

However, the 28-year-old said she never expected to return to college with dozens of sheets of paper filled with notes after being impressed by the speeches given by many of the participants at the two-day International Forum of Ecological Civilization.

Students at the college were busy preparing for the semester exam, but despite this, Luo managed to find time to sort through her notes before taking the test.

Since then, she has participated in the annual forum every year, apart from 2018. While studying in the US, she also occasionally joined scholars on trips to China to explore ecological civilization.

After graduating with a master's in social sciences from the University of Chicago in 2016, Luo decided to put herself at the forefront of exploring ecological civilization in China by establishing Laotu, a social enterprise.

"China offers more hope in creating an ecological civilization. That is why I returned," she said.

Luo used to think that ecological civilization was similar to sustainable development. However, after years of immersing herself in the concept, she changed her opinion.

"There is no need to give ecological civilization numerous definitions. It will be good enough if we can reflect on the development mindset behind industrial civilization," she said.

One of the projects launched by Laotu aims to help residents in Wolong National Nature Reserve, Sichuan province, return to their traditional way of farming, which involves using small amounts of chemical fertilizers and pesticides, and striking a balance between humans and nature.

"We want to tell them that they don't have to change their traditional methods," she said. 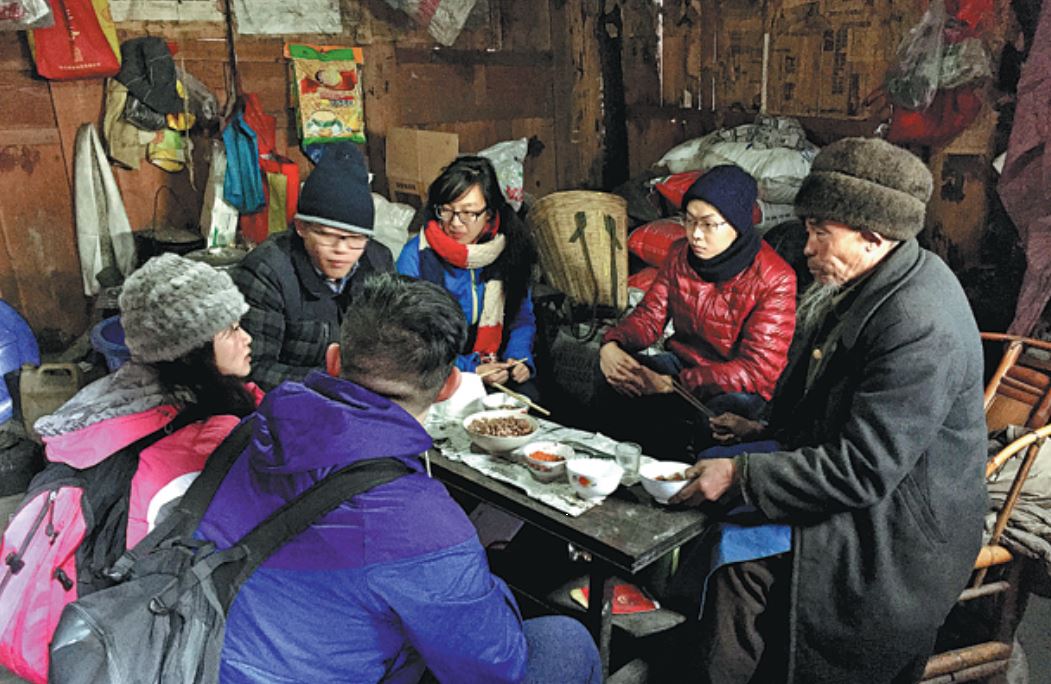 Luo said that in addition to the high degree of importance the Chinese government attaches to ecological civilization, the knowledge to be found in the nation's traditional farming culture is a factor fueling her enthusiasm for the country's ecological development.

She has the support of environmentalist and philosopher John Cobb, 96, a member of the American Academy of Arts and Sciences, who was one of the speakers to impress Luo at the US forum in 2012.

He added that he believes an ecological civilization can best be modeled in small rural towns. This does not mean such towns will necessarily lead ecological development, but they can serve as a step toward moving in that direction.

"The Chinese government is actively working to keep villages healthy and attractive. That is hopeful," he said.

Wang Zhihe, director of the California-based Institute for Postmodern Development of China, a US think tank and nonprofit organization, said Cobb is not the only overseas thinker to have high expectations for ecological development in China.

"China has a long tradition of emphasizing the harmony of nature and humanity, which has enabled Chinese civilization to survive for thousands of years," Wang said.

The thousands of traditional villages and hundreds of millions of farmers who continue with small-scale intensive farming inspire confidence in China's ecological development, he said, adding that this "will not only ensure self-sufficiency in food, but also socio-political and economic stability".

He added that China's political system, which "is able to mobilize massive social forces to cope with major crises such as the ecological one", and the determination of the country's central authorities could provide strong impetus for its ecological development.

According to Gong Ke, president of the Institute of Ecological Civilization Research at Nankai University in Tianjin, the central authorities have attached increased importance to ecological civilization for the past decade or so.

Gong made this comment while addressing the ECO Forum Global Guiyang 2021 in Guiyang, capital of Guizhou province, early last month.

In October 2007, ecological civilization was included for the first time in the report to the National Congress of the CPC by former president Hu Jintao.

General Secretary Xi Jinping said in his report to the 19th CPC National Congress in 2017 that building an ecological civilization is vital to sustaining China's development, Gong added.

Moreover, ensuring harmony between humans and nature was listed by Xi at the conference as one of the 14 points forming the basic policy underpinning the Party's efforts to uphold and develop socialism with Chinese characteristics in the new era, Gong said.

To achieve a fundamental improvement in environmental quality by 2035, China will strive to achieve green production and lifestyles in all areas of society, according to a proposal announced in late October after the fifth plenary session of the 19th Central Committee of the CPC.

Wang Yi, a member of the National People's Congress Standing Committee and the NPC's Environmental Protection and Resources Conservation Committee, said the proposal shows that, with stronger governance capabilities, the central authorities have made sustained efforts to further develop Xi Jinping Thought on Ecological Civilization.

Hu Kanping, a researcher at the Chinese Ecological Civilization Research and Promotion Association, said ecological civilization was mentioned in a central government document as early as 2003.

The document, jointly published by CPC Central Committee and the State Council, China's Cabinet, was aimed at boosting forestry development.

Hu Kanping said an ideological system for ecological civilization in China was officially formed after the 18th CPC National Congress, in tandem with Xi Jinping Thought on Ecological Civilization.

"The core and most essential philosophy of ecological civilization is the harmonious coexistence of mankind and nature," Hu Kanping said, adding that the concept is based on lessons drawn from industrial civilization.

At the virtual Leaders Summit on Climate hosted by the United States in April, Xi called for the international community to build a community of life for mankind and nature.

"It has been our constant pursuit that man and nature could live in harmony with each other," he said, delivering a speech via video link in Beijing. "Ecological advancement and conservation have been written into China's Constitution and incorporated into China's overall plan for building socialism with Chinese characteristics."

Since the dawn of industrial civilization, mankind has created massive material wealth. Yet, it has come at a cost of intensified exploitation of natural resources, which disrupted the balance in the Earth's ecosystem and laid bare growing tensions in the human-nature relationship, Xi said.

Hu Kanping said China has realized that the development path for industrial civilization is not sustainable and that "sticking to the path will only lead to a dead end".

Guided by Xi Jinping Thought on Ecological Civilization, the nation has made significant headway with its ecological development.

For example, major cities nationwide experienced fairly good air quality 87 percent of the time on average last year, a rise of 5.8 percentage points from 2015. The average density of PM 2.5 particulate matter in Beijing reached 38 micrograms per cubic meter, down from 80.6 in 2015.

Last year, water quality at all mainstream monitoring stations on the Yangtze River, Asia's longest, rated at or above Grade II for the first time in the nation's five-tier surface water assessment system.

Some 18 percent of land in China has been designated as protected areas, safeguarding 85 percent of key wild animal populations.

"Both the CPC Central Committee and the State Council have been vigorously promoting relevant top-level designs for ecological civilization. This is unprecedented in the history of mankind," Hu Kanping said.