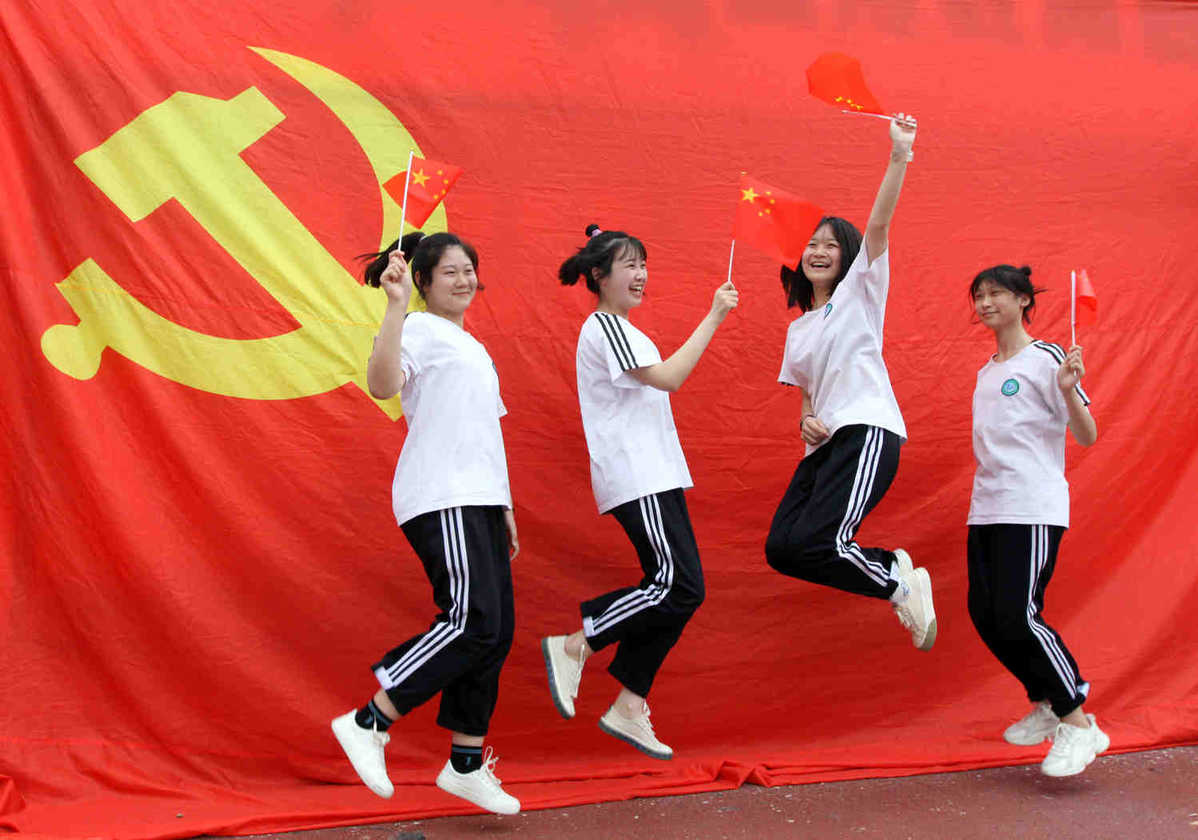 Students pose for photos with the flag of the Communist Party of China in a middle school in Bo'ai county, Jiaozuo city, Central China's Henan province, on July 1, 2021. [Photo by Cheng Quan/For chinadaily.com.cn]

The Communist Party of China has always striven to seek happiness for the people and progress for humanity, and pursued the shared human values of peace, development, fairness, justice, democracy and freedom, foreign experts said.

The Publicity Department of the CPC Central Committee released a publication on Thursday expounding on the Party's mission and contributions.

"The CPC: Its Mission and Contributions," said achieving national rejuvenation is the historic mission of the CPC, adding that the Party has made an "unbreakable commitment" to bring the people happy lives.

Koh King Kee, president of the Centre for New Inclusive Asia, a think tank in Kuala Lumpur, Malysia, said that the CPC has remained true to its original aspirations of seeking a better life, happiness for the people and the rejuvenation of the Chinese nation. Over the past 100 years, it has relentlessly striven to fulfill its founding mission.

Koh said that "putting the people first" is a major governance philosophy of the CPC, which has been manifested in all aspects of its work.

For instance, the CPC put people's life, safety and health above everything else as the unwavering guiding principle of China's fight against the coronavirus, and has effectively curbed the contagion.

Belt and Road Initiative represents the country's offer of global public good and is "a manifestation of the CPC's people-oriented philosophy on a global level", he said.

Vladimir Zakharov, a Russian Sinologist and diplomat, said China has made many great achievements under the leadership of the CPC, and there would be no New China without the CPC.

"China's success in alleviating poverty also demonstrates the strong leadership of the CPC. China's development model serves as an inspiring example for other countries," Zakharov said.

Gennady Zyuganov, chairman of the Central Committee of the Communist Party of the Russian Federation, said China has set an example of how to combine economic and social progress.

"The entire population benefits from the outcome of this development rather than a small group of people," he said.

Salman Bashir, former foreign secretary of Pakistan and a former ambassador to China, said the document reflects the priorities and values that the CPC, the Chinese leadership and the people have always upheld and they are entirely consistent with higher ideals of humanity and drawn from the unique and great civilizational accomplishments of the Chinese people.