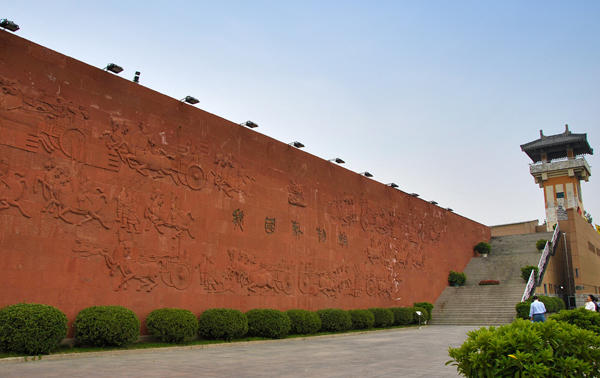 Guo State Museum was established to protect relics from the Guo State Cemetery, a historical and cultural site protected at the national level. The museum covers an area of 10 hectares with a building area of 6,200 square meters. The museum’s exhibition hall is 4,000 square meters, and the storehouse covers 500 square meters.

It is a modern, multifunctional 4A scenic spot, covering an area of 324,500 square meters, the huge Guo State Cemetery is the only well-kept hierarchical state cemetery of the Western Zhou Dynasty (1046-711 BC) and Spring and Autumn Period (770-476 BC).

Over 800 sites were discovered in the cemetery since 1956. A total of nearly 30,000 cultural relics have been excavated. The tombs of Guo Ji and Guo Zhong, the two kings of Guo State, were unearthed in the 1990s and were rated as one of the Top 10 Archaeological Discoveries in China twice in succession. In addition, the cemetery was one of 100 Chinese Major Archaeological Discoveries in the 20th Century.

The Guo State Museum was ranked as a national 4A scenic spot in August 2002 and passed ISO14001 Environmental Management System accreditation in the same year. It was awarded as one of China’s Top 10 Museum Displays in August 2003.

The Guo State Cemetery’s sites and relics are displayed in four parts including: Picking Up the Best Treasures of Guo State -- The Display of Unearthed Cultural Relics, Tracing Royalty -- The Tomb Sites of King Guji, and Chariots Rattling and Horses Neighing -- The Display for Sites of Huge Army Array.