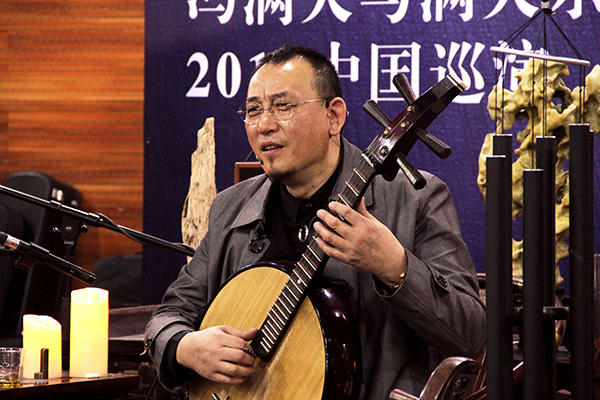 Feng Mantian plays the old Chinese plucked-string instrument ruan during a performance. Feng's music is a mix of the ruan and contemporary elements like rock and jazz. [Photo provided to China Daily]

Feng Mantian and his band plan a tour to promote his brand of Chinese music, Chen Nan reports.

In the underground parking lot of a shopping mall near Beijing's central business district is a room with a door tag that reads "Fengjia Hutong". Inside, candles are lit, incense sticks burn and musical instruments of various shapes and sizes, such as the percussion instrument bo and Japanese wind chimes lay on the table.

It is the music studio of Feng Mantian, who is going to display his collection of musical instruments and showcase his musical pieces along with his band members - flute player Ding Xiaokui and percussionist Zhao Bing. Feng himself sings and plays the ruan, an old Chinese plucked-string instrument.

"People say my music is new but actually it's just what I have learned from ancient China," says Feng, 55, whose music is a mix of the ruan and contemporary elements like rock and jazz.

Along with his band, Feng is going to launch a national tour, titled Up and Down the Mountain: Sacred and Secular, which will kick off in Xiamen, Fujian province, on April 28, and last through December, with the musician and his group also visiting Beijing, Shanghai, Suzhou in Jiangsu province and Xi'an in Shaanxi province.

Over 20 folk instruments from the country, and Nepal, Japan and Germany will be used in the show.

In the first half of the show, Feng will perform repertories that include The Wusuli Boat Song, which is based on a folk song from Northeast China; Bringing in the Wine, which is adapted from a poem by Tang Dynasty (618-907) poet Li Bai; and Xin Tian You Rhapsody, which combines popular folk songs from Shaanxi.

In the second half, he will play his original compositions for the ruan, including Dimension, Following Nature and One.

"I'm not known for giving shows with extravagant stage sets or visual effects. I will turn off the lights at the venues for 30 minutes in the second half of the show because I just want people to focus on the sounds of the instruments," says Feng.

"I want to create a space, where music is as it was in the past and the listeners can relax, feel and imagine."

He will improvise during the tour in a way that "there is no way to predict what's coming next".

Su Dan, deputy dean of the Academy of Arts and Design at Tsinghua University who met Feng on a plane in 2013, says Feng's music has changed his impression of traditional Chinese music.

"I studied architecture and I am interested in space and sounds. When Feng plays his instruments, he creates a unique space, which serves well for his music and his audience."

Feng, who was born in Harbin, Northeast China's Heilongjiang province, started to learn the yueqin, a traditional Chinese stringed instrument that belongs to the same family as the ruan, at the age of 4 along with his father, Feng Shaoxian, an accomplished yueqin player, whom he considers a major influence in his life and work.

At age 15, Feng Mantian came to Beijing and joined the China National Traditional Orchestra and started playing the ruan. He also plays other traditional instruments such as the sanxian and huqin. But he initially didn't like the ruan as it was an accompanying instrument in the orchestra and Feng felt his talent was constrained by playing it.

In 1985, along with musicians Liu Yijun and Zang Tianshuo, Feng Mantian formed the rock band White Angel. The band's album Rock in the Past was released in 1989, the same year Cui Jian, the godfather of Chinese rock 'n' roll, became an iconic figure among music fans in the country.

As Feng recalls, his rock music was "unacceptable to his father and colleagues in the orchestra", but he was happy. His time in rock music inspired his research on traditional music and the ruan. He also himself made musical instruments similar to the ruan to explore other sounds.

At the end of each performance now, he bows to the audience and lifts the ruan above his head as a ritual. "It's the player who should bow his head, not the instrument."

Feng had his first television exposure by performing on the popular China Central Television show, Amazing Chinese. He sang Cui's song, Girl in the Flower Room, and played his ruan, which soon got him attention. His goal was achieved, he says, as viewers had heard the instrument.

"After that they were curious to know its history and hear more music on it," Feng says.