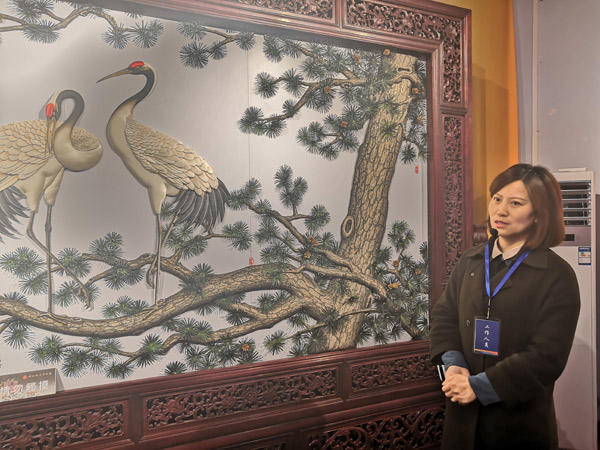 Hao Xiang, an inheritor of Teng's handicraft, introduces one of her works featuring cranes and pine trees. [PHOTO BY WANG RU/CHINA DAILY]

A handicraft based on Manchu applique art is also helping with poverty alleviation, Wang Ru reports.

A vivid depiction of mice at a wedding was recently unveiled in Fengning county of Chengde city in North China's Hebei province to a visiting UNESCO delegation.

The work was created by painting on paper and cutting shapes out to piece together the scene, with cloth and other materials, following a handicraft known as the "cloth-pasted painting", developed on the basis of traditional Manchu applique art in 1990. But the craft faced a challenge then as works lacked the desired three-dimensional effect.

Teng Teng (1932-2018) came up with a new method to make up for the deficiency and applied for a national patent in his name for this craft. His granddaughter-in-law Hao Xiang, who is also an expert in the craft, told the story behind the Chinese intangible cultural heritage to the foreign visitors.

Such handicraft works feature bright colors, vivid scenes and fine workmanship. They are created by painting the patterns on paper, dividing them into different parts, and making the parts separately into three-dimensional contours by filling them with cloth and other materials. Finally the parts are pasted on a surface and assembled as a painting.

"They have the artistic characteristics of traditional Chinese painting, Tibetan thangka, sculpture, cloisonne and some others," says Hao.

Styles of this handicraft are not limited to paintings. Some can be put up on the wall with a relief sculpture effect, others are made by using this craft on the surface of an object like a bottle or a plate and can be set on the table. Each work must go through at least nine processes before they are created. Silk is used as a major material, complemented with timber, sponge, paperboard and jewels.

According to Hao, Teng once told her that he hoped his works would please viewers as "old and skillful", which means that they also show traditional elements and techniques.

Born in a Manchu family in Fengning in 1932, Teng was good at drawing, weaving and other handwork from childhood.

"My grandfather said he especially liked painting and drew on any surface he could touch as a child. He was also able to weave mats, straw hats and small cages soon after he saw how other people made them," Hao says.

"He endured many difficulties as an adult. To earn a living, he went from his hometown to many places and did many jobs. Many of them were hard."

Teng was injured in a traffic accident in 1990 and had to take an early retirement. When he was recovering from his injuries, he made toys with some pieces of leftover silk for his grandson. The cloth work won praise from people around him and then he was invited to participate in a cultural exhibition in Chengde. 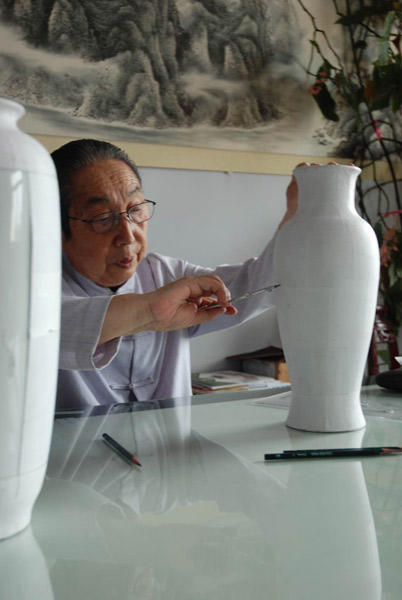 Teng Teng, creator of the handicraft known as the "cloth-pasted painting", works on a creation. [PHOTO BY WANG RU/CHINA DAILY]

Teng and his family members spent a whole month on this work, and it later proved to be a success. It was brought to Beijing for an exhibition in 1990 after being shown in Chengde.

"Someone wanted to buy the work at 12,000 yuan ($1,800) then. My grandfather was shocked since he could only earn dozens of yuan each month," says Hao.

Teng then applied for a patent and started a business. He first spent five years improving the handicraft and training people before he began to promote it. He took his works to many competitions.

"He always aimed to win the first prize at such competitions. When he didn't, he would look for weaknesses in his works and see how to improve them."

In this way, his works would gradually improve, winning many prizes and became known.

A remarkable work of Teng is a nine-dragon screen that he led many other craftsmen to make in 1997 to welcome the return of Hong Kong to China and the 10th anniversary of the establishment of Fengning Manchu autonomous county, his hometown. The work is 9 meters long and 3 meters high, depicting dragons in rich colors.

Two of his works have been chosen to be displayed at the Great Hall of the People in Beijing, and two others have been collected by the National Museum of China. More exhibits are at Longteng Museum in Fengning.

UNESCO conferred the title of "master of industrial folk art" on Teng in 2003.

After Teng passed away in 2018, his daughters, grandson, granddaughter-in-law and his students continue his work. Some have developed it further.

Teng's business has also helped poverty alleviation. According to Hao, who is the deputy director of Longteng Museum, local people, mostly women, are being recruited to assist with the work.

"This job enables us to work in the vicinity of our homes. We don't have to migrate to other places to seek employment, and we can still take care of farming work, as well as our children and the elderly people," says Fu Yanhua, 50, who works part-time at the museum.