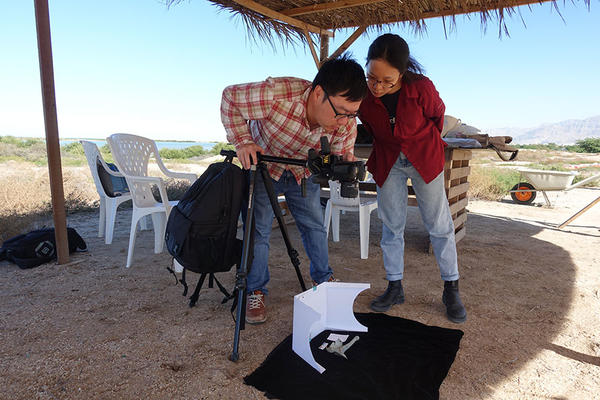 Researchers at the site study unearthed ceramics, which may deepen understanding of how the Maritime Silk Road operated. [Photo provided to China Daily]

Chinese ceramics have been unearthed near a harbor in the Middle East by a team of archaeologists from the University of Durham in the United Kingdom.

The discovery of the fragments in Ras al-Khaimah, United Arab Emirates, which have provided clues to maritime trade between the Middle East and China in the Middle Ages, has been significant for Derek Kennet and Zhang Ran from the university's Department of Archaeology.

The ceramic sherds－the archaeological term for fragments of pottery or glass－point to extensive trade along the Maritime Silk Road. The university team, along with the Palace Museum in Beijing, wanted to gain a deeper understanding of the trade links between China and the Middle East and how the fragments ended up where they did.

Kennet, an associate professor with the department, said:"It's the only evidence we have about this massive Indian Ocean trading system that came into existence. It's (evidence of) the first globalization of the world economy."

Excavation sites in Ras al-Khaimah have given archaeologists a better understanding of economic and cultural links from the 9th to 11th centuries, the importance of trade during that time and how it contributed to development of the world economy.

Researchers have unearthed Longquan celadon－ceramics produced in Longquan, Jincun and other sites in present-day Zhejiang province, where more than 400 kilns have been found.

Ceramics became an important part of China's export market during the Song (960-1279), Yuan (1271-1368) and Ming (1368-1644) dynasties. The demand for Longquan ceramics flourished, and as maritime commerce grew, they were sold throughout the Middle East.

Zhang, also an associate professor with the university department, said, "Longquan played a very important role in the ancient Chinese ceramics industry, and we have found a lar

He added that his research had resulted in Chinese ceramics being unearthed at 100 sites in the West Indian Ocean area.

Kennet and Zhang said the discovery in the UAE of the green-glazed Longquan ceramics, along with blue-and-white porcelain, proved crucial in understanding how the Maritime Silk Road operated and the "massive trade system that existed" at the time.

The Maritime Silk Road refers to a section of the Silk Road connecting China to the West, boosting trade, development and culture, while also connecting with Southeast Asia, the Indian subcontinent and the Arabian Peninsula.

Kennet said: "You can imagine those ceramics being manufactured in Zhejiang province or perhaps in the Jingdezhen kilns. (Jingdezhen is a city in present-day Jiangxi province). The ceramics were carried overland by Chinese merchants and also transported by boat from Chinese ports, making their way across the Indian Ocean－a journey of more than 10,000 kilometers."

Chinese ceramic sherds have also been found in Minab, Hormuz Island and Kish Island in Iran.

In 2016, the project team from the University of Durham formed a partnership with the Palace Museum in Beijing to further research on China's maritime trade and how it developed in the Middle East from the Tang to the Song dynasties.

The UK and Chinese teams also worked alongside representatives from Ras al-Khaimah's Department of Antiquities and Museums.

The joint research efforts have enabled experts from the university and Palace Museum to share knowledge about the production of ceramics, kilns and clay as well as the techniques employed.

Researchers from the British university also said it gave their team an insight into how the pottery was used and by which groups of people.

"The Chinese scholars are experts on the eastern end of the trade route, and we provided expertise on the western end," Kennet said. "By combining our knowledge, we could be doing something interesting that will help us to understand the world economy in medieval times."

Kennet said that in addition to uncovering China's role in global trade along the Maritime Silk Road, the team is keen to learn more about the traders and merchants involved with the ceramics.

"We found these ceramics in the Middle East, but we don't know anything about the merchants who traded them. They didn't keep any records and we haven't got any information about them at all－they are a historical blank," he said.

"The trade could have been made from China and then perhaps have gone to (present-day) Malaysia. From there, it could then possibly have involved another group of merchants, perhaps from India, who would then take the pottery to the Gulf before another set of merchants could have carried it even further," Kennet said.

"These merchants joined the world together economically in the Tang, Song and Yuan dynasties."

The medieval port of Julfar in what is now Ras al-Khaimah was one of the most important cities in the Middle East during the Middle Ages.

Julfar was a key commercial centre in the Gulf, with the pottery trade playing a significant role in the local economy for hundreds of years.

"It is an important medieval site and we have found a huge number of Chinese ceramics there. Many are rare, such as 14th-century Chinese blue-and-white porcelain," Zhang said.

The team also discovered imperial ceramic sherds from the early 15th century, providing a connection between China in the Ming Dynasty and the Gulf.

Zhang said, "Imperial ceramics were special to the Chinese emperor and strictly for use by the Imperial Court in the Ming and Qing (1644-1911) dynasties. Our excavations have shown they were traded at the Julfar site and that some of the sherds can be linked to figures from Chinese history such as General Zheng He."

Zheng was a diplomat, mariner and explorer during the early part of the Ming Dynasty who helped extend China's maritime and commercial influence throughout the Indian Ocean.

In summer last year, the research from the University of Durham was incorporated in an exhibition of Lonquan celadon collections at the Palace Museum.

Zhang said, "It was one of the biggest exhibitions staged at the museum, and we at Durham were extremely happy and honoured to be a part of it and contribute some of our collection, knowledge and research."

Since the joint research and excavation work between the university and the museum was launched, the two sides have hosted top archaeologists for seminars and conferences and have also exchanged knowledge about excavation techniques.

Wang Guangyao, deputy director of the Archaeology Institute at the Palace Museum, has been to the University of Durham to study the Williamson Collection Project.

Launched in 2001, the project centers on the study of more than 19,000 sherds of Sasanian and Islamic pottery. They were collected in Fars and Kirman provinces in Iran during field surveys and small-scale excavations between 1968 and 1971 by the late Andrew George Williamson, an archaeologist from the University of Oxford.