Public Health Gets Boost in War on Virus

The novel coronavirus outbreak has been basically contained in China, but the crisis has become a catalyst for the country to develop a stronger public health system as President Xi Jinping vowed to "weave a tight disease prevention and control network" to protect people's health.

Speaking at a symposium attended by officials, experts and academics last week, Xi called for readiness for worst-case scenarios, stronger awareness of potential dangers and constant efforts to forestall major risks in healthcare. He said people's safety is the cornerstone of national security.

Xi's remarks came as China is striving to coordinate efforts in epidemic control and socioeconomic development to resume normal social and economic order. Experts said Xi's remarks demonstrate the determination of the top leadership to improve the nation's governance system and capacity in the health sector.

Zhong Nanshan, a renowned respiratory specialist and academician of the Chinese Academy of Engineering, said he was impressed that Xi, with a people-centered governing philosophy in mind, has always made people's lives and health the top priority in responding to the COVID-19 pandemic.

In the face of an unprecedented public health emergency, the Communist Party of China and the Chinese government insisted on "putting people first" from the start of the outbreak, said Zhong. That is different from some countries that place more emphasis on economic growth than people's lives, he added.

A white paper titled "Fighting COVID-19: China in Action", which was unveiled by the State Council Information Office on Sunday, said that at a critical time when people's lives and health were endangered, the CPC and the Chinese government decided that they would protect the people's lives and health even at the cost of a short-term economic downturn and a temporary shutdown.

Thanks to the most rigorous, comprehensive and thorough measures as well as the all-of-government and all-of-society approach the CPC Central Committee has taken for epidemic prevention and control, China has achieved strategic outcomes in combating the contagion. The mass nucleic acid testing of nearly 10 million residents of Wuhan－the city hit hardest by the epidemic in China－from May 14 to June 1 found no confirmed cases and 300 asymptomatic patients.

China's practices in fighting the virus have proved that its medical and healthcare system as well as the public health emergency response system are generally effective, Ma Xiaowei, minister of the National Health Commission, said at a news conference on Sunday.

However, some weak links and flaws were also exposed in the systems as the country addressed COVID-19, Ma said, adding the epidemic has prompted the country to strengthen weaknesses in its public health system.

Xi called for reform of the disease prevention and control system and improving capabilities for epidemic monitoring and early warning and emergency response when he took part in a deliberation with deputies from Hubei province at the third session of the 13th National People's Congress, the country's top legislature, on May 24.

He said preventing a major epidemic and risks during public health emergencies is critical to China's national security and development, as well as its social and political stability.

As to how to improve the public health system, Xi underlined the need at last week's symposium to make disease prevention measures more calibrated and effective, calling for greater reform in streamlining systems and mechanisms, clarifying functions and improving professional competence. 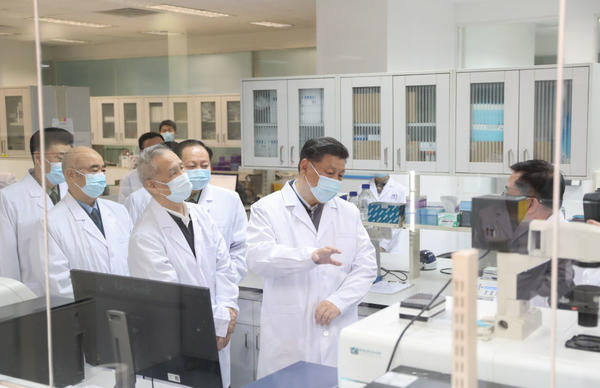 President Xi Jingping talks with scientific workers on COVID-19 outbreak research in Beijing, on May 2, 2020. [Photo/Xinhua]

Particularly, Xi stressed the pressing need for boosting early-stage epidemic monitoring and warning capacity, including efforts toward a better monitoring system for epidemics and public health emergencies, and a better monitoring mechanism for diseases of unknown cause and abnormal health incidents.

Xue Lan, dean of the School of Public Policy and Management at Tsinghua University, said that Xi's remarks constitute a strategic guideline to build a stronger public health system and a map for advancing specific reforms in the next stage.

By drawing experience and lessons from responding to the COVID-19 outbreak, Xi has shown directions for what the country needs to do to improve its governance capacity in public health, Xue said.

At the Fourth Plenary Session of the 19th CPC Central Committee in October, Xi urged efforts to modernize the nation's governance system and capacity to ensure the Party's long-term governance and the country's long-lasting peace and stability.

Speaking in February at a meeting of the Central Committee for Deepening Overall Reform, Xi said the fight against the epidemic is a major test of the country's governance system and capacity. He called for concrete efforts to raise the capacity for dealing with the major public health crisis.

During an inspection tour of Shanxi province last month, he urged more efforts to intensify social governance at the community level, underscoring the importance of community support in epidemic prevention and control.

Zhang Zhanbin, director of the School of Marxism Studies at the National Academy of Governance, said as the country is striving to coordinate its efforts in epidemic control and social and economic development, it is both strategically and realistically significant and also imperative to build a stronger people-centered public health system.

Fair and accessible healthcare services should be a part of the nation's Healthy China Initiative and also reflect achievements in modernizing the governance system and capacity, Zhang added.

Xi vowed in his report to the 19th CPC National Congress to carry out the initiative to promote people's health. According to a guideline released by the State Council in July 2019, it includes 15 special campaigns to be launched before 2030 to "intervene in health influencing factors, protect full-life-cycle health and prevent and control major diseases".