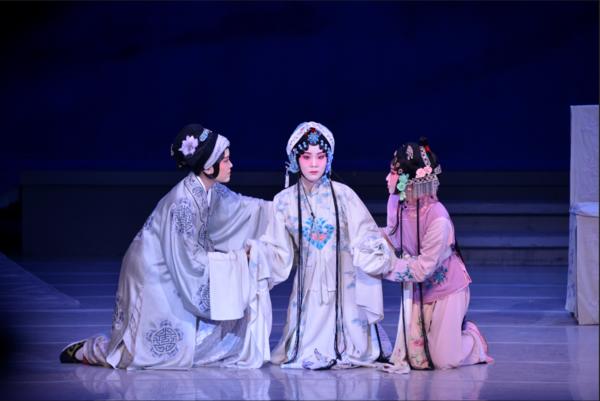 In a campus version ofThe Peony Pavilion, all the characters are performed by students from Peking University who have learned the opera for months. [Photo provided to China Daily]

Xi, who is also general secretary of the Communist Party of China Central Committee and chairman of the Central Military Commission, made the remark in a letter dated Oct 23 to teachers and students from the National Academy of Chinese Theatre Arts.

Learning about the achievements made by the academy, Xi said he was very gratified and extended his sincere greetings to all teachers, students and staff members.

Stressing that traditional Chinese opera is the treasure of Chinese culture, Xi said that the emphasis should be placed on its practitioners to help Chinese opera prosper and develop.

Xi encouraged the teachers and students of the academy to explore the true meaning of art through teaching and studying, and to constantly consolidate their original aspirations in pursuing art through serving the people.

He also called on them to make greater contributions to passing on the fine traditional Chinese culture and building China into a country with a strong socialist culture.

Founded in 1950, the academy－formerly an experimental school under the then Ministry of Culture－was the first State-organized Chinese opera educational institution established after the founding of the People's Republic of China in 1949.

Seeing the letter of reply from Xi, Chen Zhuo, 18, who is studying Peking Opera at the academy's affiliated middle school, said she was proud to be a young representative among the four generations of teachers and students who wrote to Xi.

She will keep Xi's instruction in mind, do her best to carry on traditional Chinese culture and make more people know about Peking Opera, Chen said.