Xi Calls for Advancement of All-round Cooperation with ASEAN

-- Addressing the opening ceremony, Chinese President Xi Jinping said China will work with the ASEAN to advance all-round cooperation and maintain good momentum for development and prosperity in the region.

-- Xi said the China-ASEAN relationship has grown into the most successful and vibrant model for cooperation in the Asia-Pacific and an exemplary effort to build a community with a shared future for mankind.

Chinese President Xi Jinping on Friday said that China will work with the Association of Southeast Asian Nations (ASEAN) to advance all-round cooperation and maintain good momentum for development and prosperity in the region.

Xi made the remarks via video when addressing the opening ceremony of the 17th China-ASEAN Expo and China-ASEAN Business and Investment Summit held in Nanning, capital of south China's Guangxi Zhuang Autonomous Region. 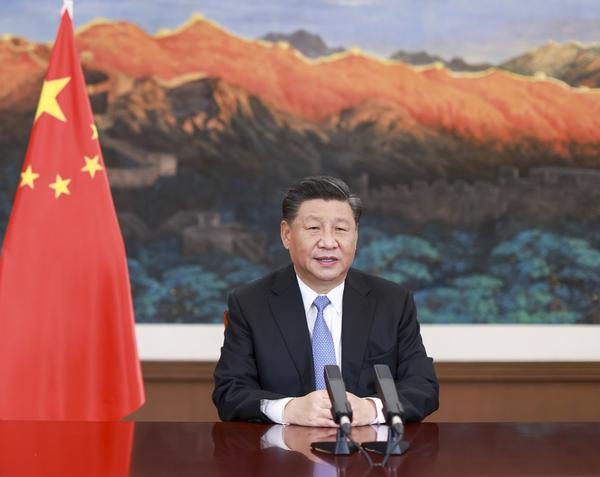 "The China-ASEAN relationship has grown into the most successful and vibrant model for cooperation in the Asia-Pacific and an exemplary effort to build a community with a shared future for mankind," Xi said.

China continues to regard ASEAN as a priority in its neighborhood diplomacy and a key region for high-quality Belt and Road cooperation, he said.

This year's expo, which will conclude on Nov. 30, aims to deepen cooperation in trade, the digital economy, science and technology, health, and other fields to foster a closer China-ASEAN community with a shared future.

Xi said that as next year will mark the 30th anniversary of China-ASEAN dialogue relations, China will work with ASEAN to take their strategic partnership to a higher level.

China welcomes the signature of the Regional Comprehensive Economic Partnership (RCEP) and looks forward to its early entry into force, he said.

It will work with ASEAN members to sustain the smooth flow of trade, promote mutual investment, open up markets wider to each other, and foster deeply integrated industrial, supply and value chains, Xi said.

ASEAN has become China's largest trading partner. In the first 10 months, bilateral trade between China and ASEAN increased by 7 percent year on year to 3.79 trillion yuan (about 571.64 billion U.S. dollars), accounting for 14.6 percent of China's foreign trade, according to China's General Administration of Customs.

This year's expo also highlights the RCEP, the world's biggest trade pact, which was signed earlier this month by 15 Asia-Pacific countries, including ASEAN's 10 member states and China. It was a massive move for regional economic integration, multilateralism and free trade.

"I believe that the RCEP will also provide a solid foundation for an open, inclusive, and rules-based global trade environment," said Myanmar President U Win Myint at the expo's opening ceremony.

Xu Ningning, executive president of the China-ASEAN Business Council, said that opening up the markets of the 15 countries to each other will bring about new changes and closer regional cooperation.

Stressing the need to deepen cooperation on the digital economy, Xi said China and ASEAN could create more highlights of cooperation in such areas as smart cities, 5G, artificial intelligence, e-commerce, big data, blockchain and telemedicine, and strengthen the protection of data security and policy communication and coordination.

China will work with ASEAN on the China-ASEAN Information Harbor to advance digital connectivity and build a digital Silk Road, he added.

The added value of China's digital economy registered 35.8 trillion yuan in 2019, accounting for 36.2 percent of the country's GDP, up 1.4 percentage points from the previous year, according to the China Academy of Information and Communications Technology.

"China is one of the countries that are at the forefront in developing, investing and utilizing digital technology in the world. In this regard, advancing cooperation in the area of digital technology, under the Belt and Road Initiative, will be an important agenda in the future," said Cambodian Prime Minister Samdech Techo Hun Sen via video at the expo's opening ceremony.

It is estimated that ASEAN's digital economy will increase from 1.3 percent of the group's GDP in 2015 to 8.5 percent in 2025, according to ASEAN Secretary-General Lim Jock Hoi.

Myanmar President U Win Myint said that the digital economy is an important segment of sustainable development, "especially at a time when we are becoming increasingly reliant on digital technology for communication, education, health care, trade, investment, stock exchange, and other forms of business activities in theace of challenges posed by the global pandemic."

"We should also continue to encourage the exchange and transfer of modern technological know-how in order to facilitate a transition to the digital economy," said Lao Prime Minister Thongloun Sisoulith.

China stands ready to work with ASEAN to enhance policy dialogue on public health, information sharing and cooperation on the production, development, and deployment of vaccines, Xi said.

"The COVID-19 crisis has made us realize the importance of friendship and international cooperation even more. We have witnessed weaknesses that need to be improved and strengths that need to be further enhanced and developed," Thai Prime Minister Prayut Chan-o-cha said via video at the ceremony.

The crisis caused by the pandemic bears testimony to the greater need to uphold the principles of multilateralism and to strengthen international cooperation, said Cambodian Prime Minister Samdech Techo Hun Sen.