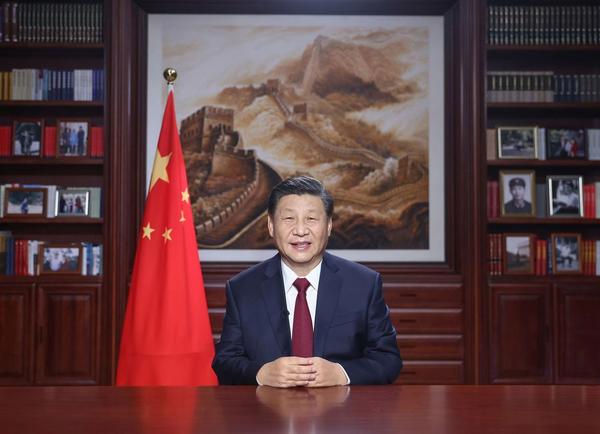 The Chinese people have written an epic of disease control with their unity and strength throughout the extraordinary year of 2020, and they will create a more splendid future through hard work as they have always done, President Xi Jinping said on Thursday.

Xi, also general secretary of the Communist Party of China Central Committee and chairman of the Central Military Commission, expressed sympathy to COVID-19 patients and greeted the heroes in the fight against the pandemic in his New Year's address.

Xi highlighted the contributions made by doctors, soldiers, scientists, community workers, volunteers and builders, young or old, in overcoming difficulties together.

The heroes have carried out their missions at the cost of their lives, protecting the people with their love and building a strong screen to safeguard lives, Xi said.

"Everyone is amazing," Xi said, adding that he was proud of the great nation and people.

Xi said China has taken the lead among major economies to achieve positive economic growth, and the country's GDP is expected to reach the new stage of 100 trillion yuan ($15.29 trillion) in 2020.

The president noted rising grain production for 17 consecutive years and major scientific steps such as the Tianwen 1 Mars probe, the Chang'e 5 lunar probe and deep-diving manned submersible Fendouzhe, or Striver. Construction of the Hainan free trade port has also picked up steam, along with China's plan to further open up its economy.

The country defeated severe flood disasters, and flood losses were kept at a minimum through the joint efforts of the military and people, Xi said.

Xi said that when he inspected 13 provinces and municipalities during the year, he was glad to see the people implement disease prevention measures prudently, waste no time in resuming work and production and spare no efforts to promote innovation.

China has made historic achievements in building a moderately prosperous society in all respects and secured decisive victory in poverty reduction, Xi said.

Through eight years of sustained work, China has lifted all 100 million rural poor out of poverty under the current standard, Xi said, adding that he has been impressed by the people's spirit of hard work and the poverty alleviation officials' contributions when he visited poverty-stricken areas.

Xi also recalled his phone conversations with leaders of other countries and his participation in video link meetings, saying that all nations should join in fighting disease and making Earth a better home.

Xi noted that 2021 is the 100th anniversary of the founding of the CPC. He said upholding the people-centered philosophy and remaining true to its original aspiration, the Party definitely will lead the Chinese people to achieve national rejuvenation.