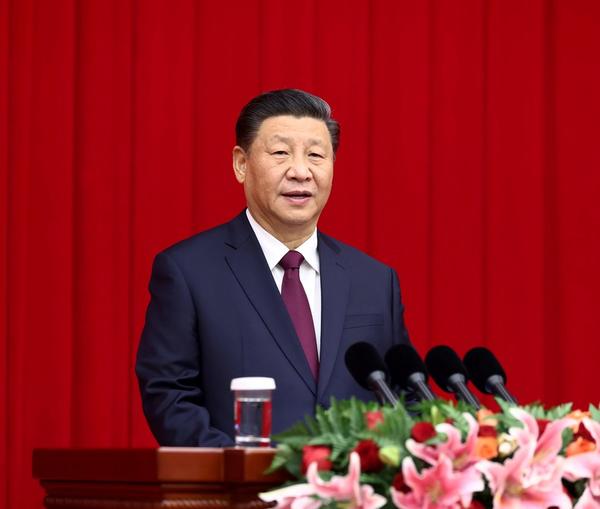 BEIJING, March 4 -- China's development has been advancing in a new historic journey since late 2017, when Chinese President Xi Jinping noted at the 19th Communist Party of China (CPC) National Congress that China's economy was transitioning from a phase of rapid growth to a stage of high-quality development.

To forestall and defuse various kinds of risks and proactively address challenges brought by external changes, China needs to focus on taking care of its own matters and improving the quality of development, Xi has said.

It is widely believed that this new vision for development, featuring innovative, coordinated, green, open and shared development, benefits not only China, but the world as a whole.

"China will work with other countries to build an open, inclusive, clean and beautiful world that enjoys lasting peace, universal security and common prosperity," Xi said in his speech at World Economic Forum Virtual Event of the Davos Agenda in January.

China's high-quality development can only be achieved through greater openness, Xi said at the opening of the Boao Forum for Asia Annual Conference in 2018.

In May 2020, the CPC leadership made a strategic decision to foster a new development pattern where domestic and foreign markets can boost each other, with the domestic market as the mainstay.

"Making the domestic market the mainstay does not mean we are developing our economy with the door closed," Xi told a symposium of entrepreneurs in July last year. By giving full play to the potential of the domestic market, both domestic and foreign markets can be better connected and utilized to realize robust and sustainable development, he said.

China will follow the new development philosophy, foster a new development paradigm, and pursue high-quality development by staying committed to deepening reform and opening wider to the world, Xi said when delivering a speech via video at the third Paris Peace Forum in 2020.

He stressed that China will also work with the rest of the international community to keep the global industrial and supply chains stable and to foster an open world economy.

According to official data released in 2020, China had signed 200 cooperation deals on the Belt and Road Initiative with 138 countries and 30 international organizations. The country had also established 21 pilot free trade zones. Its global business environment ranking moved up to the 31st in 2020.

In his phone conversations with various foreign leaders, Xi has called for high-quality Belt and Road cooperation, stressing that China welcomes active participation by various countries in its development and construction for mutual benefits and win-win results.

Innovation is the primary driving force behind development. China must pursue innovation-driven growth and make breakthroughs in key and core technologies to achieve high-quality development. Those are remarks taken from several of Xi's articles published on the Qiushi Journal, a flagship magazine of the CPC Central Committee.

Progress was made in building Beijing, Shanghai and the Guangdong-Hong Kong-Macao Greater Bay Area into global sci-tech innovation centers, as well as in manned space program and moon probe.

When the Party leadership held a study session on the research and application of quantum science and technology in October 2020, Xi again emphasized the importance of technological innovation.

It plays a very important role in accelerating the development of quantum science and technology in promoting high-quality development and safeguarding national security, he said, stressing that quantum mechanics is a major achievement in human's exploration of the microworld.

On the same occasion, Xi called for efforts to follow the path of independent innovation, make breakthroughs in key core technologies, ensure the safety of industrial and supply chains, and enhance China's ability of responding to international risks and challenges with science and technology.

Under Xi's leadership, China has achieved unprecedented ecological progress. Energy consumption per unit of gross domestic product dropped 13.2 percent between 2015 and 2019, city dwellers now breathe in unpolluted air for 82 percent of the days in a year, and water quality has improved to sound levels.

The pollution control goals set out in the 13th Five-Year Plan have been accomplished, as Xi has urged governments at all levels to remember that "clear waters and green mountains are invaluable assets."

At the virtual Climate Ambition Summit in December 2020, Xi said the international landscape is evolving more rapidly, and COVID-19 is triggering deep reflections on the relationship between man and nature.

Xi urged the international community to pursue a new approach to climate governance that highlights green recovery and pledged China's further commitments for 2030 to tackling the global climate challenge.

Moreover, speaking at the United Nations Summit on Biodiversity in September 2020, Xi highlighted the major risks in loss of biodiversity and the degradation of the ecosystem.

He made four proposals, including adhering to ecological civilization and increasing the drive for building a beautiful world; upholding multilateralism and building synergy for global governance on the environment; continuing with green development and increasing the potential for high-quality economic recovery after COVID-19; and calling on countries to strengthen the power of action to tackle challenges to the environment.

He also said that he believes that fostering high-quality economic recovery in the post-pandemic era requires enhancing cooperation and exchanges across borders.