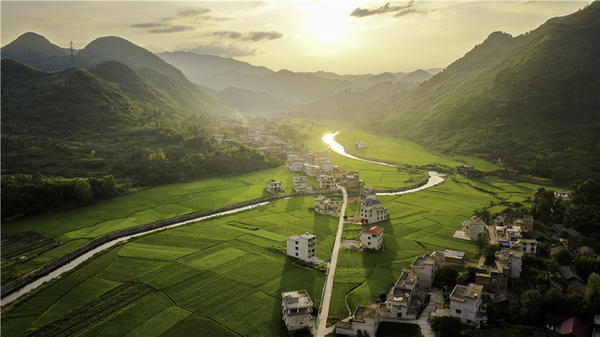 The sun sets on Jinxing village in Chengbu Miao ethnic autonomous county, Hunan province. Chengbu was removed from the list of impoverished counties at the beginning of last year, having become a booming tourism and agricultural center. [Photo provided to China Daily]

A key meeting of the Communist Party of China reviewed on Tuesday a guideline document to promote the high-quality development of the country's central region in the new era, urging the area to serve and integrate into the new development paradigm to contribute to the nation's modernization process.

Promoting the high-quality growth of the central region has great relevance to the country's overall development, according to a statement released after the meeting.

China's central region refers to the provinces of Anhui, Henan, Jiangxi, Shanxi, Hunan and Hubei. It is seen as the country's main base for food production, energy and raw materials, equipment manufacturing and high-technology industry, as well as being a comprehensive transportation hub.

Efforts should be made to facilitate the building of a modern industrial system supported by an advanced manufacturing industry, promote green development, expand the inland region's high-level opening-up and enhance the integrated development of urban and rural areas to accelerate the region's growth, the statement added.

Participants in the meeting underlined the need for the region to find its right position in the country's huge market and leverage its strength to speed up the building of modern infrastructure and a transportation system, facilitate the development of city clusters and comprehensively advance rural vitalization.

The region should view technological innovation as the primary force to drive its development and shape the new system of the inland's high-level opening-up, they said, adding that low-carbon approaches must be taken to realize the region's green development.

China has adopted a series of regional development strategies, including the integrated growth of Beijing, Tianjin and Hebei province, the Yangtze River Economic Belt and the Guangdong-Hong Kong-Macao Greater Bay Area. The rise of the central China strategy is similar to these.

When Xi made an inspection tour in Jiangxi province in May 2019, he presided over a symposium, urging the region to make concrete efforts to integrate into the national strategies for high-quality growth and to improve its overall strength and competitiveness.