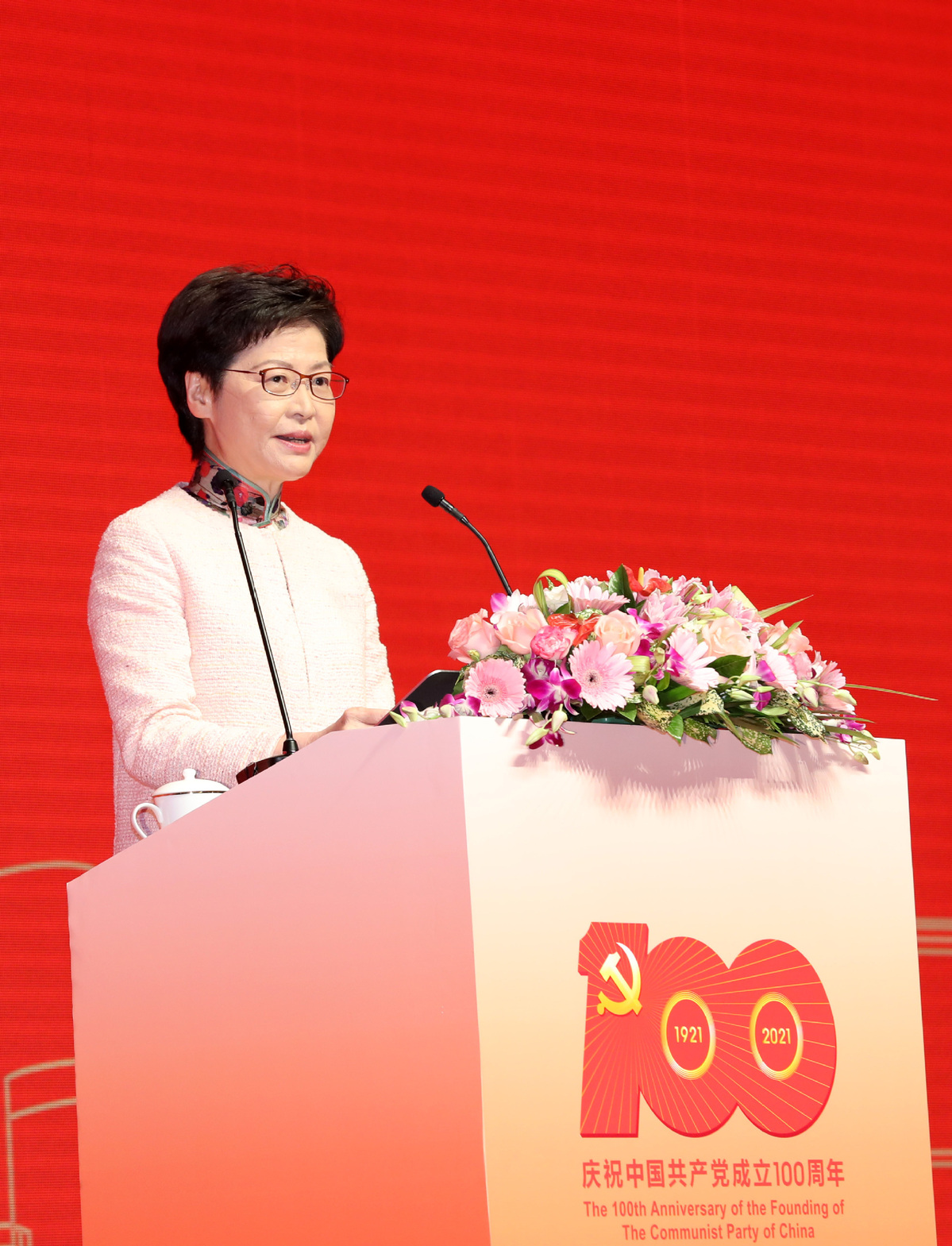 Carrie Lam, chief executive of the Hong Kong Special Administrative Region, speaks at a forum under the theme of "CPC and 'one country, two systems'" in Hong Kong on Saturday, June 12, 2021. [Photo/Xinhua]

HONG KONG - The Communist Party of China (CPC) has always cared about the interests of Hong Kong compatriots and supported the development of the global financial hub, Carrie Lam, chief executive of the Hong Kong Special Administrative Region, said on Saturday.

The groundbreaking concept of "one country, two systems," proposed by the CPC and the Chinese government, has allowed Hong Kong people to maintain the system they are familiar with and keep their way of life as much as possible after Hong Kong returned to the motherland, Lam said in her speech at a forum here.

Only the CPC, which puts the people at heart and cares about the well-being of Hong Kong compatriots, can implement such an enlightened system, Lam said.

Back in the 1960s, the central authorities arranged special cargo trains to provide daily necessities for Hong Kong residents and channeled water from Dongjiang River to Hong Kong, she said.

An array of favorable policies have also been put in place after Hong Kong's return to the motherland, which has boosted Hong Kong's status as an international finance, trade and shipping center, she added.

The 14th Five-Year Plan for national economic and social development supports Hong Kong in developing into an international innovation and technology center and a hub for arts and cultural exchanges between China and the rest of the world, Lam said.

As Hong Kong faced unprecedented political chaos and a major national security risk over the past two years, the central authorities, under the leadership of the CPC, resolved Hong Kong's problems in accordance with the Constitution, the Basic Law of the HKSAR, and the "one country, two systems" principle, Lam said.

Lam added that the implementation of the national security law in the HKSAR has helped Hong Kong return to order from chaos, while the improvement to Hong Kong's electoral system ensures "patriots administering Hong Kong."

The forum, under the theme of "CPC and 'one country, two systems,'" was held in Hong Kong to mark the 100th anniversary of the founding of the CPC.

More than 650 people from various sectors in Hong Kong attended the forum, including Tung Chee-hwa and Leung Chun-ying, vice chairmen of the National Committee of the Chinese People's Political Consultative Conference, as well as Luo Huining, director of the Liaison Office of the Central People's Government in the HKSAR.