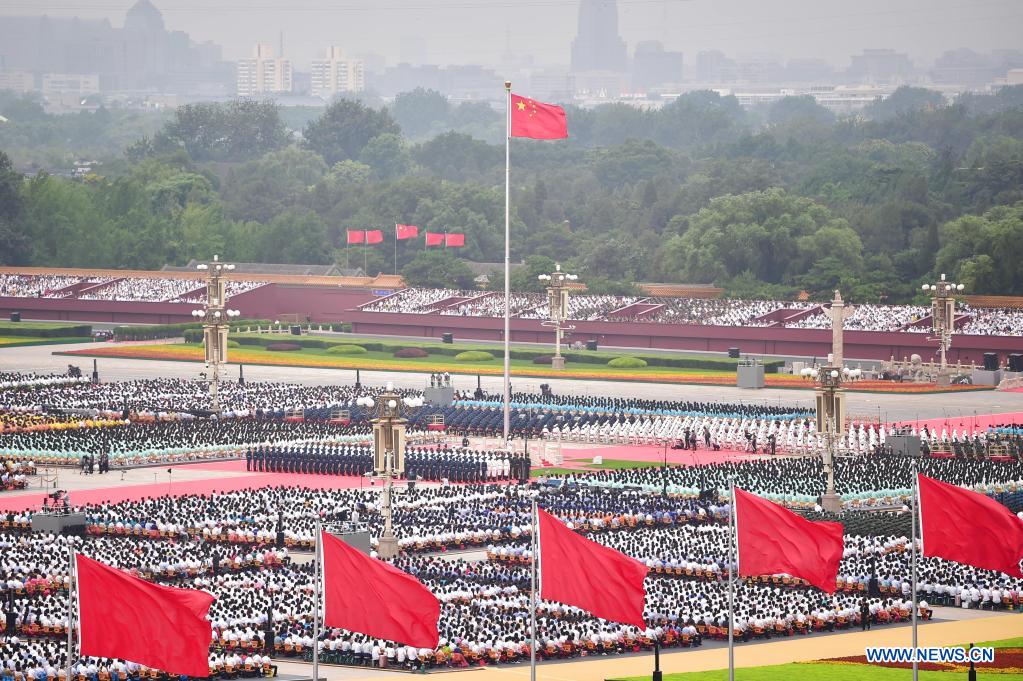 A ceremony marking the centenary of the Communist Party of China is held at Tian'anmen Square in Beijing, capital of China, July 1, 2021. [Photo/Xinhua]

Foreign diplomats in China lauded the celebration of the 100th anniversary of the Communist Party of China, saying that the speech delivered by Xi Jinping, general secretary of the CPC Central Committee, was inspirational.

The diplomats and a number of other expats were among the over 70,000 people who took part in the celebration at Tian'anmen Square, which was also broadcast live to global audiences on Thursday.

"It was an honor to be part of this historic event as President Xi Jinping shared with this great nation the CPC's perspective of achievements attained so far and the vision that is driven by the desire for a better community for mankind," said Martin Chedondo, ambassador of the Republic of Zimbabwe to China, who attended the celebration.

The achievements by the CPC over the past 100 years have demonstrated that the decisions and resolutions taken by the Party leadership at every stage of the nation's development have contributed to the epochal success of building a moderately prosperous society in all respects, Chedondo said.

From Zimbabwe's perspective, the success registered by the CPC provides encouragement to other political parties, he said.

"With the loud calls for adhering to the principle of multilateralism gaining ground and with China at the forefront, the developing world feels assured that this is the only route that will guarantee our security and propel the world to attain equal development," he added.

Mahendra Bahadur Pandey, Nepal's ambassador to China, said he was impressed with the grand celebration, audience applause and the happy mood.

"This achievement of the CPC is very inspirational for people who do believe in socialism and are trying their best to move forward their socialist economy and society," he said.

Dino Rachmadiana Kusnadi, minister and deputy chief of mission of the Indonesian embassy to China, said the celebration was both a fantastic display of China's magnificent achievements and a form of appreciation toward the historic development and vital contribution of the CPC.

"Such a display indeed showcased to the global audience that the people of China are highly fortunate, as the CPC has brought about sustainable development for the prosperity of the people," he said after participating in the celebration.

He said that Xi's speech could be seen as a foundation by the CPC on how to move China forward.

He added that Indonesia looks forward to further establishing a close partnership for a peaceful and harmonious Southeast Asia region in the future together with China.