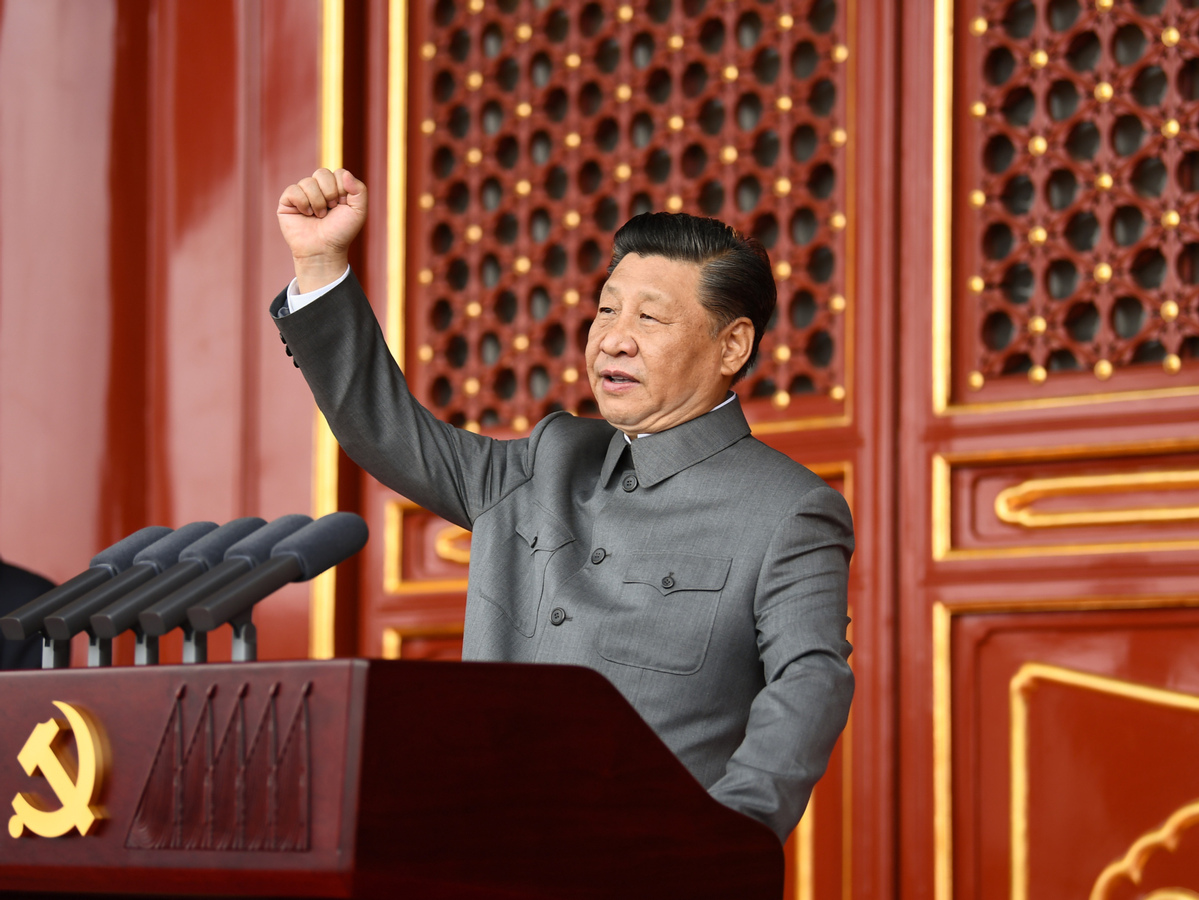 Xi Jinping, general secretary of the Communist Party of China Central Committee, Chinese president and chairman of the Central Military Commission, delivers an important speech at a ceremony marking the centenary of the CPC in Beijing, July 1, 2021. [Photo/Xinhua]

As the Communist Party of China (CPC) marked its centenary, China was declared to have reached a milestone development goal.

Atop Tian'anmen Rostrum, President Xi Jinping, also general secretary of the CPC Central Committee and chairman of the Central Military Commission, announced that China has achieved building a moderately prosperous society, or Xiaokang, in all respects.

In the traditional Confucian sense, Xiaokang describes a state whereby, although there is imperfection, everyone is adequately provided for. It was reintroduced into political discourse in the 1970s, and the CPC has since led efforts to turn this concept into reality.

Over the past eight years, the CPC Central Committee with Xi at the core oversaw the final push that transformed China into a Xiaokang society in all respects.

Pick up the baton

Building a prosperous society has been the Chinese people's common aspiration for millennia.

In the early years of China's reform and opening up, the late Chinese leader Deng Xiaoping first used Xiaokang to describe Chinese modernization, and proposed building a Xiaokang society.

After the Chinese people no longer had to worry about feeding and clothing themselves and saw their lives generally improve, the Party laid out plans to further build China into a Xiaokang society "in all respects."

At the 18th CPC National Congress in November 2012, the Party announced that China had entered a decisive stage of attaining this goal. Soon afterward, Xi was elected general secretary of the CPC Central Committee.

"By the time the CPC marks its centenary, a moderately prosperous society in all respects can definitely be achieved," Xi said when visiting an exhibition in the National Museum of China, after taking over the helm of the Party. The theme of the exhibition was "Road to Rejuvenation."

Xi said achieving the Xiaokang goal on time represents "a solemn promise that our Party has made to the Chinese people and to history."

He often told cadres that "time and history wait for no one" and urged them to go all out. He also set the standards and made specific requirements for achieving the goal.

For a Xiaokang society, all aspects of modernization, including the economic, political, cultural, social and ecological domains, should be developed in a coordinated fashion, Xi said.

It needs to cover all domains, the entire population and all regions, he added.

A long-term view must be adopted, he said, adding that it is not a "game of numbers" or a "game of speed."

Led by Xi, the Party has played a pivotal role in the pursuit of the Xiaokang goal. Party secretaries throughout the ranks assumed the responsibility of poverty relief. Work teams and cadres were sent to the countryside to fight poverty on the front lines. The Party also played a key part in all key spheres concerning Xiaokang, such as finance, cyberspace and national security.

Bring benefits to all people

Xi made eradicating rural poverty the basic mission and symbolic benchmark of achieving the Xiaokang goal. When he took over the Party's top job, China still had a large number of rural people living under the poverty line.

Xi took charge of directing the national fight against poverty, put forward the "targeted poverty alleviation" strategy, and personally visited all 14 contiguous poor areas across the country. He presided over seven key central-level poverty relief symposiums and made over 50 trips to check problems and progress on the ground.

"Not a single ethnic group, family or individual should be left behind," Xi said.

Efforts have paid off. In February 2021, Xi declared that China had eliminated absolute poverty, lifting all the remaining 98.99 million rural poor out of poverty.

But Xiaokang is not all about income. A good life calls for a good environment. Since 2012, the CPC Central Committee with Xi at the core has given greater priority to ecological advancement, and waged a war on pollution with a scale and ferocity never seen before.

In his domestic inspections, Xi would visit mountains, rivers, lakes, wetlands and grasslands to ensure that all parts of the natural environment are well protected. For example, since 2016, he has visited the upper, middle, and lower reaches of the Yangtze River, convened three symposiums and repeatedly stressed putting ecological restoration before development for regions along the Yangtze.

Eleven provinces and municipalities have since carried out overhauls in the past five years, leading to a comprehensive makeover of the river basin's ecology.

Significant progress has been made in other areas as well. In 2020, 87 percent of all days across 337 major cities saw good air quality readings, while the proportion of surface water with fairly good quality reached 83.4 percent, up from 66 percent five years ago.

Xi also concerned himself with many other factors affecting the lives of the people: rural toilet renovation, urban garbage sorting, food security, affordable medicines, equal public services for urban and rural residents, the right amount of homework and tutoring for students. He devised plans and pushed through reforms to bring more benefits to the people in delivering on the Xiaokang goal.

Lay a solid foundation for modernization

Building a Xiaokang society in all respects represents an intermediate step in China's pursuit of modernization.

Xi said "in all aspects" is what makes the goal much more difficult to achieve. Culture, public health, rule of law and science are all part of it. He led the formulation of policies and initiated reforms to let cultural activities blossom, promote fairness and justice, and construct a strong public health system.

He also led reforms to increase the country's urbanization rate to over 60 percent and build unified basic health insurance and pension systems that cover both urban and rural residents, among other moves to close the urban-rural gap.

Xi has encouraged farmers to grow distinctive rural industries and use online platforms to market their products. "There will always be some hundred million rural people. We can't have prosperous cities on one hand and dilapidated countryside on the other," he said.

Under Xi's watch, China has made major breakthroughs in science and technology, in the fields of quantum communication, artificial intelligence, 5G and high-speed trains. Innovation has become a key driving force for high-quality development.

The economic transformation and upgrading have also sped up, with emerging new industries, new business forms and new models. China is also opening up wider. It has expanded pilot free trade zones, accelerated the building of the Hainan free trade port, and hosted a series of events such as the China International Import Expo and the China International Consumer Products Expo. The country has seen thriving economic and trade exchanges with Belt and Road countries.

A Xiaokang China is one that is innovative, full of vigor, beautiful and open.

Looking ahead, the Chinese people are marching in confident strides toward building a great modern socialist China and achieving national rejuvenation.