People Hit by Flood Find Many Sources of Help 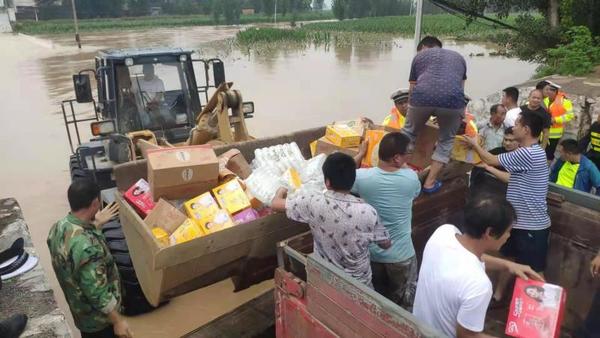 Liu Meilan and her husband have been living in a classroom for almost a week after leaving their home in Xinxiang, Henan province, due to heavy downpours.

However, they are satisfied with their temporary accommodations. "The conditions in the school are good enough for now, and I will go home to clean up once the floodwaters subside," Liu said.

From July 17 to Saturday, a total of 132 townships in Xinxiang were hit by rainstorms and floods, affecting more than 2 million people, according to the Xinxiang office of the provincial flood control and drought relief headquarters.

Liu, 66, from Hongqi district, was one of the residents that were evacuated. Her home is on the ground floor of a two-story building in a low-lying area susceptible to flooding. On July 20, when the heavy downpour hit Xinxiang, water entered the house and rose rapidly.

"We moved furniture and appliances onto the bed, but it was all in vain. The water quickly rose to my stomach and continued to rise. Then my husband and I realized something was wrong. We put our hands against the wall for stability and slowly walked out of the house," she said.

That night, the couple moved into a primary school in the district, which they share with more than 50 people, including nine children and rescue teams from other cities. Groups of about eight to 10 people occupy each classroom and hot water is available in the restrooms.

Hundreds of volunteers go to the school every day to deliver donated supplies. Medicine, food and water bottles are piled up in the school playground. The school is no longer accepting donations, so they are delivered to other places that need supplies.

Wu Jun, 42, a teacher at the school, has been working as a volunteer at the temporary shelter since Wednesday. His wife and son have stayed at the family home to clean up the mess left by the floodwaters.

Due to the severity of the flooding, the school has accepted anyone asking for help. At the beginning, Wu and other volunteers were worried they could not properly feed and look after people due to limited supplies and facilities. However, the large number of donations eased their concerns.

"A steady flow of donated supplies started arriving and we still have people asking us if we need more donations," Wu said. "We also have volunteers who heard about the donations who came quickly to the school to help unload them."

Many of the volunteers are in their 20s and nobody has complained about the difficult conditions. Wu said he is proud to work with the other volunteers.

"I feel that we are all a family, as those volunteers and generous donors have lent a hand to my hometown in times of crisis. This sort of unity is also an important reason why our country is getting richer and stronger," he said.

Most urban areas of Xinxiang have been largely restored to normal, but a large swath of Weihui, a county-level city in northeastern Xinxiang, is still affected by the flood. The water level is gradually declining, the Weihui city government said on Monday.

Rescue workers are relocating affected people to resettlement sites, and relief aid is being delivered.