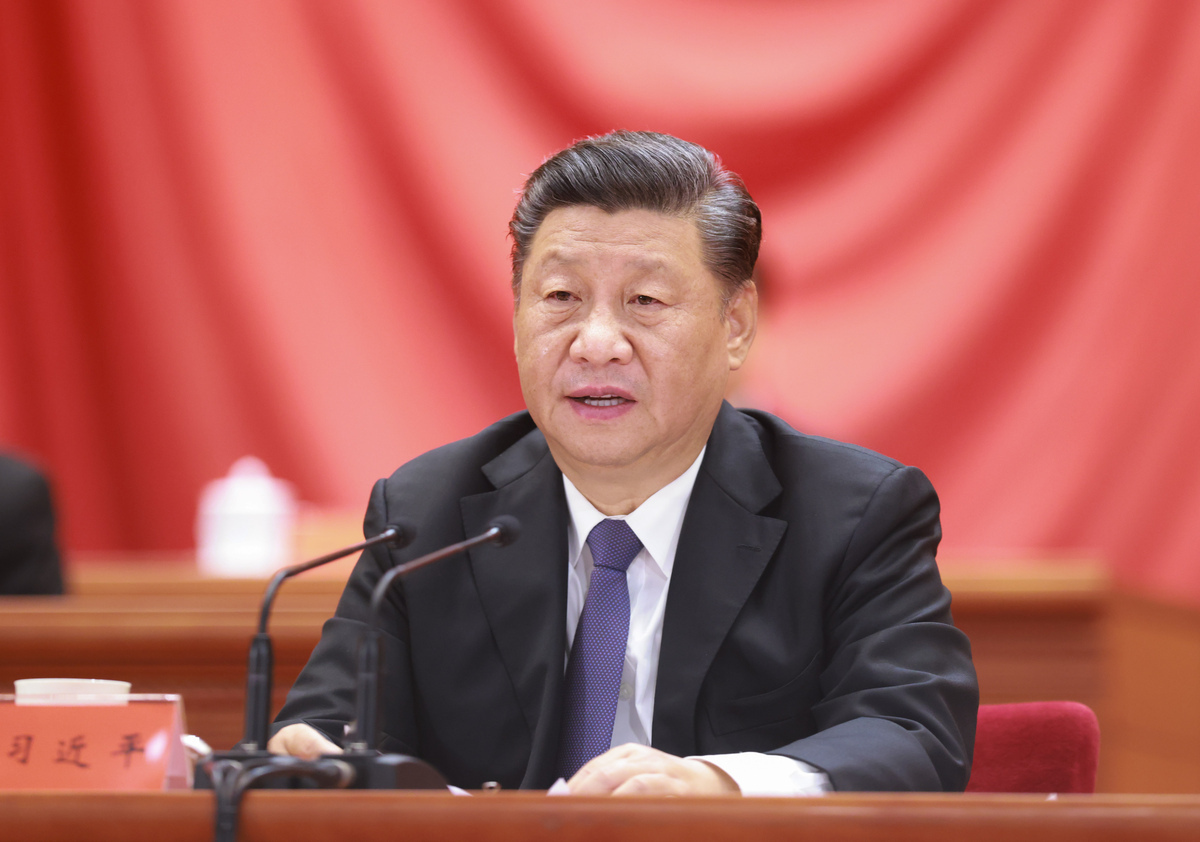 President Xi Jinping, also general secretary of the Communist Party of China Central Committee and chairman of the Central Military Commission, addresses a meeting commemorating the 70th anniversary of the Chinese People's Volunteers forces entering the Democratic People's Republic of Korea to fight in the War to Resist US Aggression and Aid Korea (1950-53), at the Great Hall of the People in Beijing on Friday, Oct 23, 2020. Ding Lin/Xinhua

President Xi Jinping has underscored the need to promote the common prosperity of all people through high-quality development and called for coordinated efforts to prevent and defuse major financial risks the nation might face.

Xi said that realizing common prosperity is the essential requirement of socialism and it is also an important feature of China's modernization.

He underlined the need to uphold the people-centered development philosophy to promote common prosperity while pursuing high-quality growth.

Noting that the financial sector is a critical component of the modern economy that matters to both development and security, Xi called for efforts to ensure the country's financial stability based on market-oriented and law-based principles.

Participants at the meeting heard reports from ministries and commissions under the State Council that are involved in efforts to promote common prosperity as well as preventing and defusing financial risks, according to a statement released after the meeting.

Promoting common prosperity must be the Party's priority to seek happiness for the people in order to meet their ever-growing demand for a better life and consolidate the foundation of the Party's long-term rule, the meeting's participants said.

They stressed that common prosperity is the prosperity of all the people, both materially and spiritually. It is neither for a small minority, nor is it the pursuit of absolute egalitarianism, they added.

While underlining the need to promote common prosperity in phases, the meeting's participants called for creating conditions and opportunities for more people to develop and become prosperous.

They also highlighted the need to properly deal with the relationship between efficiency and equity in income distribution, saying that efforts should be made to expand the middle-income group, increase the incomes of lower-income groups and rationally adjust higher incomes in order to enhance social fairness and justice and promote people's all-around development. The purpose is to ensure all people will march toward common prosperity, they added.

The meeting's participants stressed the importance of protecting people's property rights and their intellectual property rights, and underscored the need to ensure the healthy development of all kinds of capital.

Ensuring overall financial stability is critically important, the meeting's participants said, adding that a systematic approach and the worst-case scenario must be taken into account in preventing and defusing financial risks.

They also called for efforts to stabilize growth while mitigating against financial risks and building up the momentum for the country's economic recovery.