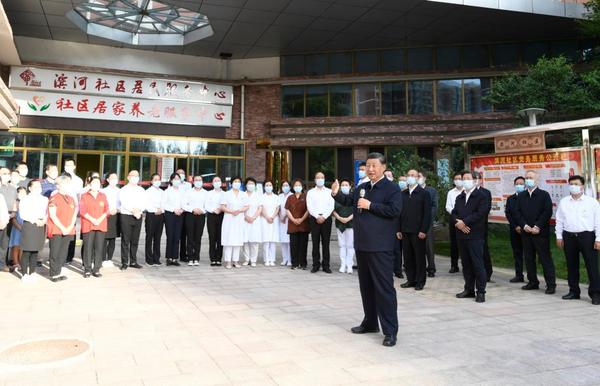 Xi, also general secretary of the Communist Party of China (CPC) Central Committee and chairman of the Central Military Commission, made the remarks during an inspection tour of Chengde City in north China's Hebei Province from Monday to Tuesday.

Xi stressed implementing the CPC Central Committee's decisions and arrangements, staying committed to the general principle of pursuing progress while ensuring stability, and putting into practice the new development philosophy in an all-round, faithful manner.

Xi began the tour with a visit to the Saihanba mechanized forest farm in the northernmost part of Hebei on Monday afternoon.

China has the world's largest area of man-made forests, an extremely great achievement, as noted by Xi. Saihanba, he said, has set an example in the global history of ecological progress.

Xi expressed his hope that the farm staff would continue to work hard and take bold steps to explore deepening the reform of state-owned forest farms, promoting green development and increasing their carbon-sink capacity.

Talking with staff representatives of the farm, Xi said generations of workers there have forged through concrete actions the Saihanba Spirit, featuring staying true to the original aspiration, being hardworking and enterprising, and pursuing green development.

The achievement, Xi said, is an example to the rest of the country in advancing ecological progress.

He urged the promotion of the Saihanba Spirit to inspire people to make new contributions to the realization of China's second centenary goal.

On Tuesday morning, Xi inspected the Chengde Mountain Resort, a UNESCO World Heritage Site, to learn about the protection of cultural relics.

He stressed efforts to properly protect, develop and utilize fine traditional Chinese culture, in a bid to build stronger cultural confidence and foster the national spirit.

Leaving the site, Xi went to the Puning Temple, which was first built in 1755.

Xi stressed upholding the principle that religions in China must be Chinese in orientation, with active guidance provided to religions so that they can adapt themselves to the socialist society.

He then visited the Chengde Museum. Noting that China is a united multi-ethnic country, Xi said the diverse Chinese nation has been formed over the course of a long history.

Experience has shown that only the CPC can unite the Chinese nation, and only under Chinese socialism can all ethnic groups work together and achieve development and prosperity, Xi said.

Continuous efforts should be made to consolidate and develop socialist ethnic relations of equality, unity, mutual assistance and harmony, he added.

In the afternoon, Xi paid a visit to the village of Daguikou in Chengde, where he inspected progress on rural vitalization.

Xi dropped by the home of villager Huo Jin and chatted with the family. He stressed that, even when China's urbanization has reached a high level, there will still be hundreds of millions of people working and living in rural areas.

Prosperity must be achieved in both urban and rural areas, Xi said, calling for building a new socialist countryside that is more beautiful and has better living conditions.

He also visited a community-based service center for elderly home-care in the city.

Pointing out that ensuring a happy life for the elderly people in their later years is a vital responsibility of Party committees and governments at all levels, Xi called for efforts to develop all-inclusive elderly care services and improve the networks for community-based service centers for elderly home-care.

He also called on communities to play an active role as the first line of defense in coordinated control mechanisms and remain vigilant against the COVID-19 epidemic.

Talking with community residents in a public square, Xi said that China will definitely realize national rejuvenation as more than 1.4 billion people are bending their efforts in one direction and traveling with perseverance on the path of socialism with Chinese characteristics for a new era.