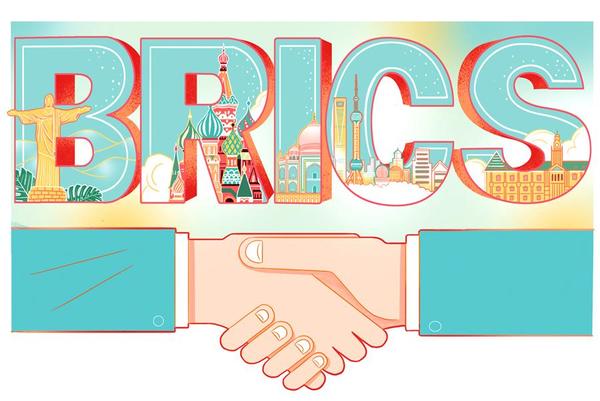 China has played an active role in guiding cooperation among the BRICS nations to promote multilateralism in the face of global challenges and has pushed for the bloc's cooperation to benefit more emerging economies and developing countries, experts said ahead of the 13th BRICS summit, to be held on Thursday.

President Xi Jinping will participate in the summit from Beijing via video link at the invitation of Indian Prime Minister Narendra Modi, Foreign Ministry spokeswoman Hua Chunying said on Wednesday.

The summit, which involves the leaders of Brazil, Russia, India, China and South Africa, will be held with the theme of "BRICS@15: Intra-BRICS cooperation for continuity, consolidation and consensus".

The leaders will also exchange views on the impact of the COVID-19 pandemic and other current global and regional issues.

Ruan Zongze, executive vice-president of the China Institute of International Studies, said that as an essential platform for developing countries to respond to challenges and overcome difficulties, the BRICS cooperation mechanism will help boost and safeguard multilateralism, especially at a time when the world is undergoing major changes unseen in a century.

He suggested that the BRICS countries should strengthen cooperation on public health, such as COVID-19 vaccine cooperation and the exchange of anti-pandemic experience, in order to better address similar crises in the future.

The BRICS nations also reiterated their commitment to multilateralism by issuing joint statements at the 11th BRICS Economic and Trade Ministers' Meeting held via video link last week and a virtual meeting of foreign ministers in June.

Due to the pandemic, it would be the second time that such a virtual summit is held. However, Wang Lei, director of the BRICS Cooperation Center at Beijing Normal University, said: "BRICS cooperation has still achieved solid results in the economic and financial field, one of the bloc's three pillars, despite the pandemic's negative impact."

During last week's economic and trade ministers' meeting, several documents were adopted, including a joint communique, a framework for the protection of e-commerce consumers and a road map to implement the strategy for BRICS Economic Partnership 2025 in the field of trade and investment.

Accounting for more than 40 percent of the world's population, the BRICS countries－Brazil, Russia, India, China, and South Africa－account for 24 percent of global GDP and 16 percent of world trade.

"We can see that the BRICS countries have reached consensus on how to deal with the current economic difficulties by boosting their cooperation," Wang said, adding that support for multilateralism is another major consensus among BRICS countries.

On Sept 2, the BRICS New Development Bank announced that it will add the United Arab Emirates, Uruguay and Bangladesh as its newest members.