Closed Mondays (Except for national holidays)

A beautiful view of the Anyang Museum in Central China’s Henan province [Photo/www.aybwg.org]

Established in 1958 and covering an area of more than 20,000 square meters, the Anyang Museum in Central China’s Henan province is a comprehensive history museum. It primarily showcases the culture dating to the latter half of China's Shang Dynasty (known as Yin, c.13th century-11th century BC), since Anyang was the capital of the dynasty.

With seven exhibition halls, it has a collection of more than 10,000 cultural relics dating from the Paleolithic Age to modern times, including oracle bones, jade ware, metal ware, ceramics, currencies, paintings, and contemporary and modern arts.

The Anyang Museum houses a permanent exhibition themed on Chinese ceramics. It consists of three sections. The first section showcases prototype celadon from the Shang Dynasty (c.16th century-11th century BC) to the Sui Dynasty (581-618). The second section displays the unique porcelain with the motif of white and black flowers unearthed from the Cizhou Kiln in Anyang during the Song and the Yuan dynasties (960-1368). The last section presents the pinnacle in the development of Chinese porcelain during the Ming and the Qing dynasties (1368-1911) and the beauty of Chinese ceramics through the porcelain of Anyang at that time. 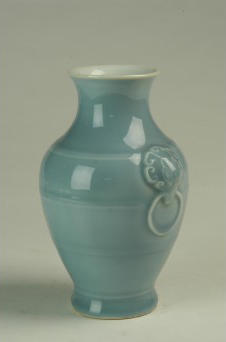 A celadon vase from the Qing Dynasty (1644-1911) collected by the Anyang Museum [Photo/www.aybwg.org]