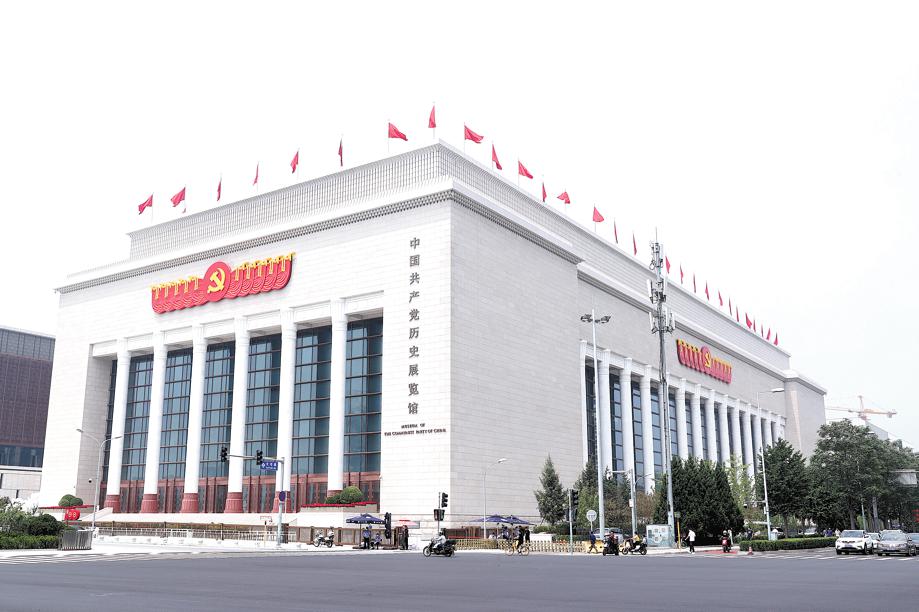 The simple but grand museum building, in a photo taken in June. [Photo by Chen Xiaogen/For China Daily]

General Secretary has highlighted importance of studying CPC's past

As this year marks the centenary of the Communist Party of China, the Museum of the CPC－a new landmark in northern Beijing－is set to be a hot destination during the weeklong National Day holiday.

As a site devoted to the permanent and comprehensive exhibition of the Party's history, it shows how the CPC has united and led the Chinese people in blazing new paths and demonstrates the fine spirit and precious experience it has drawn from within.

In the three months since its public debut on June 19, the museum has attracted about 100,000 visitors from various sectors, including government agencies, enterprises and colleges.

On June 18, President Xi Jinping, who is also general secretary of the CPC Central Committee, visited an exhibition at the museum with the theme "staying true to the founding mission".

During the visit, Xi, who is also the chairman of the Central Military Commission, said the Party's history is the most vivid and convincing textbook.

"The past 100 years have seen the CPC unswervingly fulfilling its original aspiration and founding mission, working hard to lay a foundation for its great cause, and making glorious achievements and charting a course for the future," he said.

Xi stressed that it is necessary to study and review the Party's history, carry forward its valuable experience, bear in mind the course of its struggles, shoulder the historic mission, and draw strength from its history to forge ahead.

The exhibition has four parts: the founding of the CPC and the victory of the New Democratic Revolution; the founding of the People's Republic of China and the socialist revolution and development; reform and opening-up, and the start of socialism with Chinese characteristics; and carrying forward socialism with Chinese characteristics into a new era, building a moderately prosperous society in all respects, and embarking on a new journey toward fully building a modern socialist country.

Li Fengxian, a 72-year-old retired accountant who lives in north Beijing, visited the exhibition recently. She said she also visited the museum site regularly before the completion of construction.

"I was born the same year as New China was founded," she said. "I have witnessed how the country has grown stronger and stronger under the leadership of the Party. I had to go and visit the museum at the first opportunity."

Having experienced the country's development under the leadership of the Party, Li said her generation felt deeply that today's happy life and prosperous society hadn't come easily.

"It's a miracle that a country that could hardly even feed all the people decades ago has now become the second-largest economy in the world," Li said. "It is the Party that leads us to the bright future."

At the museum, more than 2,600 pictures and more than 3,500 pieces or sets of exhibits reflect the extraordinary 100-year journey of the CPC.

Among the items are the manuscript of Karl Marx's notes from Brussels, and scenes depicting the first CPC National Congress and the famous Zunyi Conference during the epic Long March (1934-35).

"Seeing the notes is like having a conversation with Karl Marx by traveling back in history," said Li Zongyuan, deputy curator of the museum. "Visitors will feel a close connection with the great people and gain a strong awareness of our responsibility to better practice Marxism in China with our own characteristics."

Also on display are boards showing the establishment of revolutionary bases, footage from the founding ceremony of the People's Republic of China, and weapons used during the War to Resist US Aggression and Aid Korea (1950-53).

Charts relating to poverty alleviation and models of the Huoshenshan and Leishenshan hospitals built in Wuhan, Hubei province, to fight the COVID-19 epidemic last year are also on display.

Foreign visitors have also been impressed. Konstantin Shepin, a Russian journalist who has been working in China for nearly two decades, visited the museum recently. He said the visit was a lively class to help understand the Party and its history.

"I was cheered up and more confident about the future of China after viewing the exhibition displaying the historical, theoretical and social logic of China's development in the past 100 years," he said, adding that it was wrong for many foreign media outlets to view China's development and the leadership of the Party in isolation.

"There is a popular song among Chinese people, Without the Communist Party, There Would Be No New China. It shows that the Party plays a crucial role in China's achievements. What is exhibited here is the best proof and more people from abroad should learn about it," he said.

In the museum's post office, Shepin bought a commemorative envelope with the postal code 100100.

"The number marked both the Party's 100th anniversary and also its future targets," he said. "I brought one as a gift to commemorate the Party's birthday."

With just over 50 members at the time of its founding, the CPC is today the world's largest governing party, with more than 95 million members, and leads a country of more than 1.4 billion people.

Song Fei, a high school student in Beijing, made an online appointment to visit the museum as soon as she saw the notice announcing its imminent opening. Both her parents are Party members.

"For our generation, which has grown up in a peaceful time, it is a bit difficult to be aware of how our happy life came about unless we learn the history," she said. "Without a deep knowledge of the past, it is hard for people today to imagine how many difficulties were faced by heroes of that time to found the CPC."

After seeing the exhibition, Song said she was impressed by the early days of the Party.

"Facing so many challenges and even threats to their lives, the Party members could still bear their belief and mission in mind and sacrificed themselves for the country and its people. It's so touching," she said.

"Seeing how the CPC's leadership has made our country increasingly prosperous, I am even keener to join the Party and make my own contribution. The Party's centenary is an opportunity to commemorate the martyrs. We must pass on their spirit, generation after generation."

Believing that the Communist Party of China's history is the most vivid and convincing textbook, the CPC Central Committee, with General Secretary Xi Jinping at its core, decided to build a Party history museum in late 2017.

A piece of land reserved for cultural sites near the Beijing Olympic Park was chosen, taking into consideration its location, the height of the building and the surrounding environment.

The Beijing Institute of Architectural Design (Group), renowned for designing the Great Hall of the People more than 60 years ago, became the museum's leading design institute.

The museum's groundbreaking ceremony was held on Aug 26, 2018, and construction began on Sept 10 that year.

In September last year, he listened to a work report on engineering construction and museum exhibitions, and outlined clear requirements for the next step.

He stressed the importance of demonstrating the theme of "staying true to the founding mission" to show that the CPC strives for the well-being of the people and national rejuvenation.

"The museum should be a sacred hall, a spiritual home for Party members, an educational center to guide the public to follow the Party's instructions, and an authoritative institute for Party history research and publicity," Xi said.

On Feb 8, Xi presided over a meeting to review the Party history exhibition plan.

The meeting stressed that representative and convincing elements should be used to clearly explain the historical background of the founding of the CPC, the historical inevitability of the Chinese people choosing the leadership of the CPC, and the Party's adherence to integrity, innovation and progressing with the times.

After nearly 1,000 days of construction, the Museum of the CPC was officially completed on May 5.

Details of the museum are full of historical connotations.

The museum is in the shape of the Chinese character gong, which means workers or labor in Chinese and looks like a horizontal H. The design implies that the CPC is the vanguard of the Chinese working class, the Chinese people and the Chinese nation.

"The color of the museum's facades is earthy yellow. It shows that the Party comes from the people who like the earth and that provides a solid foundation for the Party's growth," said Shao Weiping, chief architect at Beijing Institute of Architectural Design (Group).

The building adopts a traditional colonnade structure, fully representing the essence of Chinese architecture: upright and foursquare, simple but grand.

There are 28 colonnades on the eastern and western sides of the exhibition hall, symbolizing that after 28 years of struggle, the CPC established the People's Republic of China.

Five magnificent sculptures stand in the museum's square, with a huge CPC flag sculpture, aptly named Flag, denoting that the CPC flag offers direction and is a source of strength. In the four other sculptures, 276 figures tell the story of the CPC's 100-year struggle for the well-being of the Chinese people and national rejuvenation.

The museum also has some construction materials with special meanings, Bai Yimin, its deputy curator, said.

"For example, the cornerstone of the museum is from Yan'an, a former revolutionary base of the CPC," Bai said.

Nearly two-thirds of the main building area, or about 150,000 square meters, has been designed as exhibition space.

In the exhibition hall, a special post office has been set up to serve visitors and tell the CPC's history through its services, using a special postal code, 100100, that not only symbolizes that the museum was completed upon the 100th anniversary of the founding of the Party, but also that the CPC is marching forward toward its two centenary goals.