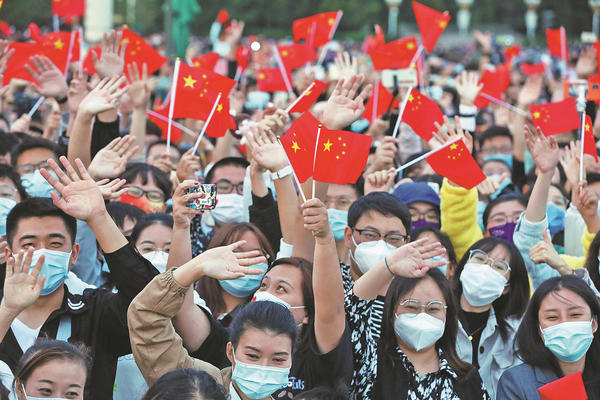 A large crowd of people cheer during the flag-raising ceremony in Tian'anmen Square in Beijing on Friday in celebration of National Day. Zhu Xingxin/China Daily

People from across the country gathered in Tian'anmen Square to witness the national flag-raising ceremony on Friday morning, the first day of the weeklong National Day holiday.

Throughout the country, various activities were organized to celebrate the 72nd anniversary of the People's Republic of China.

In Beijing, people were already gathering in Tian'anmen Square at 2 am, many of them holding small national flags, wearing red masks and with national flag patterns painted on their faces.

The square was decorated with flower baskets on the theme of "Bless the Motherland", and these became a popular background for snapshots.

Zhang Yunming, a 12-year-old boy from Xinxiang, Henan province, stood in the first row with his parents. He told Beijing Daily that his family arrived in the capital at 10 pm on Thursday and headed straight to the square to find a good spot where they could be closer to the flagpole.

"I've seen the ceremony on television, but this is the first time I've ever been so close to the scene. It's definitely going to be spectacular. I'm not sleepy at all," he said before the ceremony.

Many university students were also drawn to the event. Wang Xinrui, a PhD student at the Chinese Academy of Agricultural Sciences, told Beijing Daily that generations of revolutionary martyrs sacrificed their lives so Chinese people would have better lives today, and that as a young person, he wanted to make his contribution to the country after he graduates.

"This year is very special because our Party celebrated its 100th birthday. As a Party member, I must come here to experience this exciting moment of flag-raising," he said.

Guangzhou, the capital of Guangdong province, organized traditional lion dances and had national flags raised along the streets to create a festive atmosphere.

Jiuzhaigou, a well-known scenic area in Sichuan province, announced its reopening on Tuesday after being struck by an earthquake in 2017. Local authorities had replanted 656,000 trees and restored the damaged ecosystem of more than 366 hectares.

To prepare for the inflow of National Day holiday tourists, Sichuan province announced the opening of 12 new scenic spots and seven special tours in Jiuzhaigou.

Shaanxi province issued 5,000 cards on Thursday, each containing 200 yuan ($31) in coupons for tickets to events and attractions.