"Before we conclude, may I ask you something that I am really curious about?"

On the afternoon of March 22, 2019, near the end of his meeting with President Xi Jinping, Roberto Fico, president of Italy's Chamber of Deputies, raised this question. 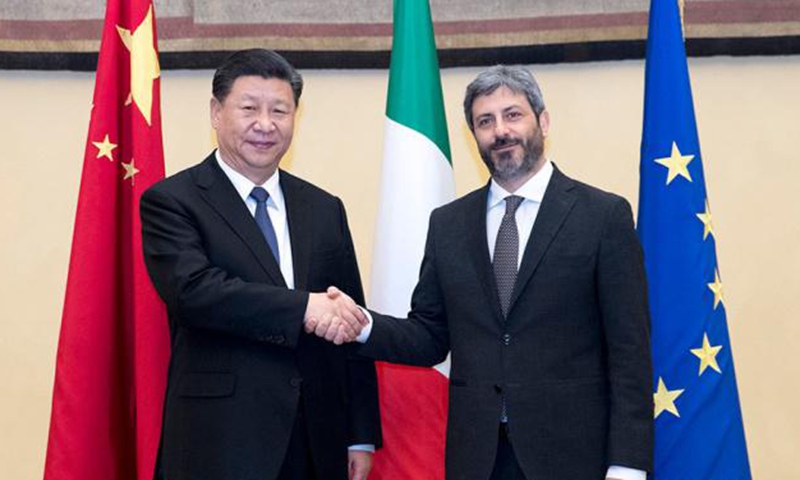 Everyone in the room turned to him.

"What did you feel when you were elected Chinese president?" Hearing laughter in the room, Fico explained, "I was very excited when I was elected President of the Chamber of Deputies of Italy. Since China is so much bigger, I wonder what you might be thinking when you were elected to lead such an important country in the world."

President Xi looked at Fico, calm and full of strength. "It is indeed a huge responsibility and arduous task to govern such a big country." He replied. "For the good of my people, I will put aside my own well-being. I am willing to be selfless and devote myself to China's development."

After a slight pause, President Xi went on to say, "A novice weightlifter may only manage 50 kilograms at the start. After training, one could lift up to 250 kilograms of weight. I believe, with my hard work and with the joint efforts of the 1.3 billion Chinese people, we will be able to shoulder the weight of this responsibility and run our country well. I have confidence, and so do the Chinese people." 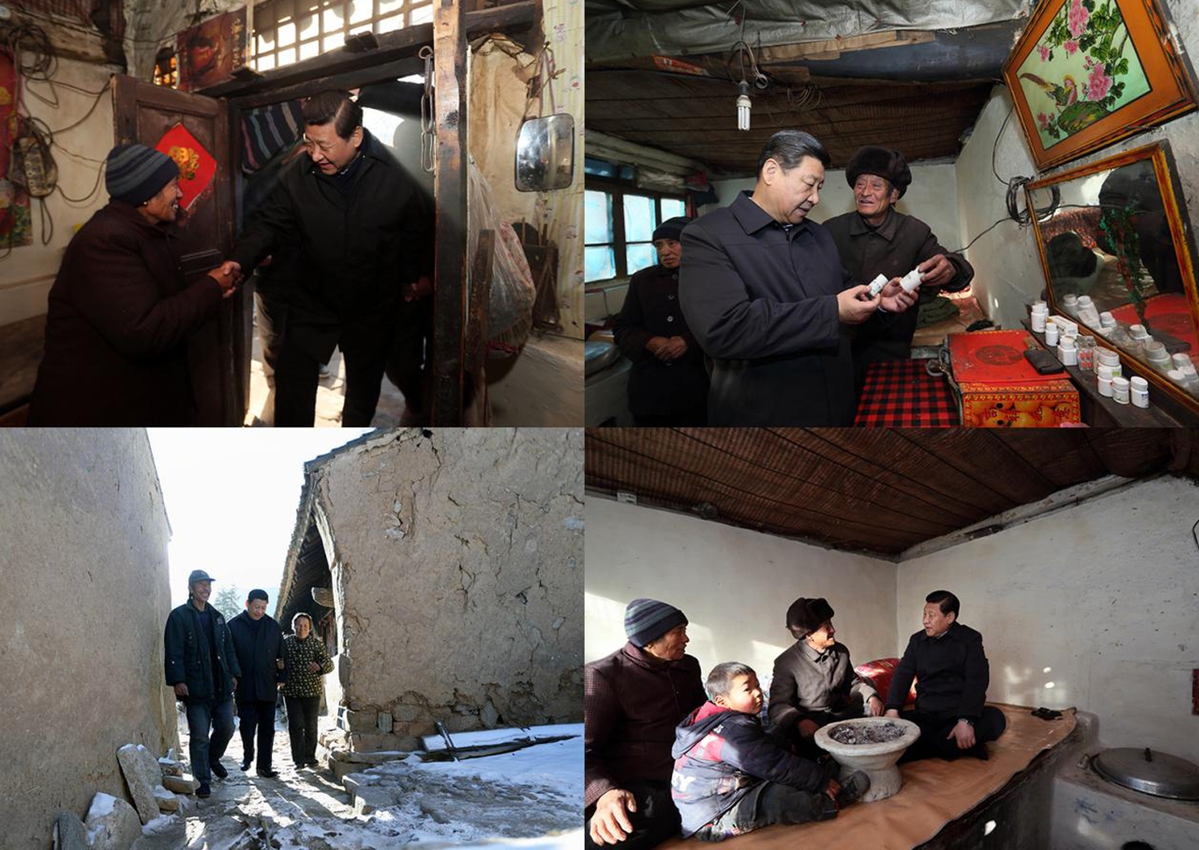 "You're welcome to visit China. You will see a country that is both ancient and modern and a people who are hard-working and intelligent." Hearing President Xi's invitation, Fico gladly replied, "I will do."

One's character determines what one pursues. Being "selfless" requires dismissing calculations of self-interest and working tirelessly for the greater good. President Xi articulated that "the aspirations of the people to live a better life must always be the focus of our efforts." He vowed to "serve the people and shoulder responsibilities" and insisted that he is "a servant of the people." All this reflects his devotion to the Party and the country, a character that underpins his wholehearted love and care for the people, and his commitment to stepping forward for the benefit of the people.

One's mindset determines what one will achieve. Being "selfless" means working diligently for public interests and exercising power for the people. President Xi underscored that "the CPC pursues development that benefits the people." He chose to "displease a few hundred corrupt officials for the good of the 1.3 billion" and solemnly declared that "the people is the greatest source of confidence for the CPC's governance." President Xi has always placed the people on the top of his mind, which undergirds his commitment to working wholeheartedly for fairness, justice and benefits of the people, and to leading the whole Party and the entire nation toward realizing the Chinese dream. 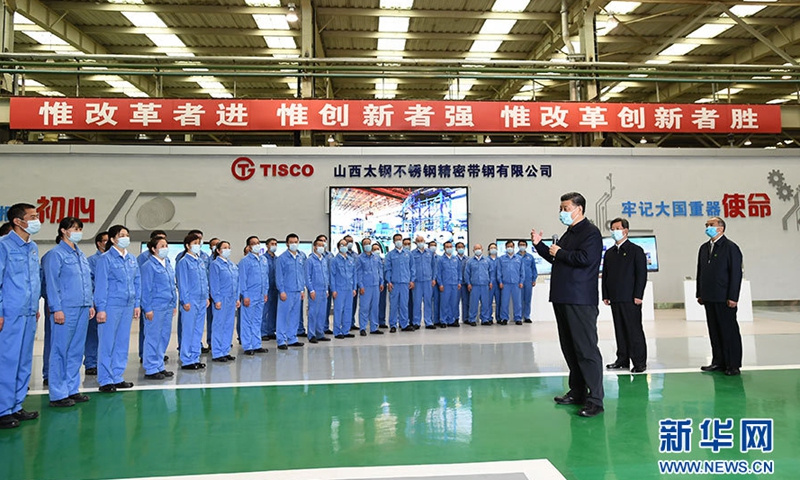 Xi Jinping talks with employees of the Fine Stainless Strip Steel Co Ltd of TISCO on May 12, 2020.

Words give expression to thought; books are a manifestation of one's mind. President Xi's reply to his Italian interlocutor was not out of the blue, but a demonstration of his consistent, people-first philosophy that is reflected in his speeches, instructions and works such as The Governance of China.

In an interview with a Russian TV channel in February 2014, President Xi shed some light on where his time had gone. He admitted that he was too busy to have personal time, and emphasized that it was the people who "put me in this job" and "the responsibility is heavier than mountain." To explain what this meant to him, President Xi used an excerpt from Memorial on the Northern Expedition by Zhuge Liang, a 2nd-3rd century Chinese statesman: "Ever since I was entrusted with this mission, I have been worrying day and night, for I fear that I may not live up to people's expectation."

"When the Party and the people need us to give our all, we shall do so without the least hesitation and put aside any personal interests. If we couldn't do it, how could we expect anyone else to?"

"The people have given us the power and we must give our all for the Party and the country. We must do whatever should be done, and displease whoever must be displeased."

"We shall stay true to our mission, and never forget that we are communists and revolutionaries. We shall never lose the revolutionary spirit."

With such simple and earnest words, President Xi has spoken from the heart as a leader of the people, and made a solemn commitment as a member of the Party. 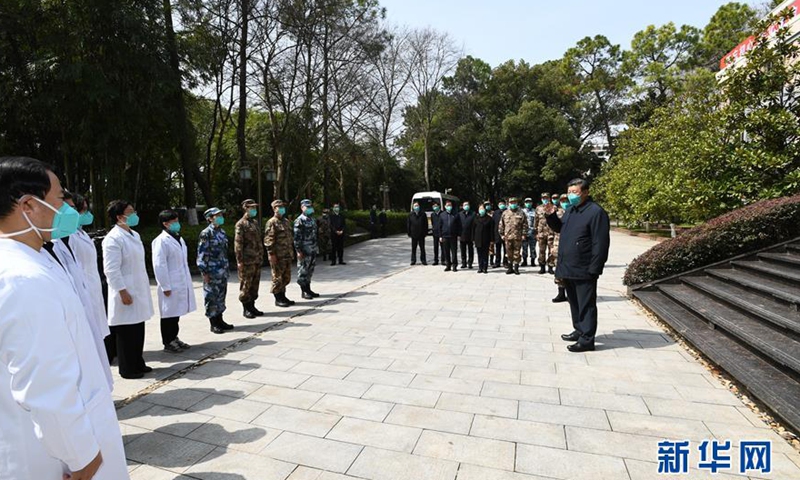 Xi Jinping visits representatives of health workers from Hubei province and from the PLA and other provinces at Huoshenshan Hospital on March 10, 2020.

Since the 18th CPC National Congress, the CPC Central Committee with Comrade Xi Jinping at its core has risen to challenges, pioneered and pushed ahead with reforms. It has developed a series of new ideas, new thinking and new strategies, adopted a range of major policies, launched a number of major initiatives, and pushed ahead with many major tasks. It has solved many tough problems that were long on the agenda but never resolved, and accomplished many things that were wanted but never got done. The CPC has remained true to its original mission and forged ahead unrelentingly in a selfless spirit; it has taken real actions and fought hard for the good of the Chinese people. With solid performance, the CPC connects the past, present and future of a great cause.

"I am willing to be selfless and devote myself to China's development." This is President Xi's solemn commitment and public exhortation. For President Xi and all members of the CPC, the people will always remain the first-order priority in their values, mission and pursuit. The CPC will keep in mind the interests of the people, shoulder its responsibilities, and stand with the people through thick and thin. Under the leadership of the CPC, China, a country both ancient and modern, will grow even more vibrant and surge forward with an unstoppable momentum.