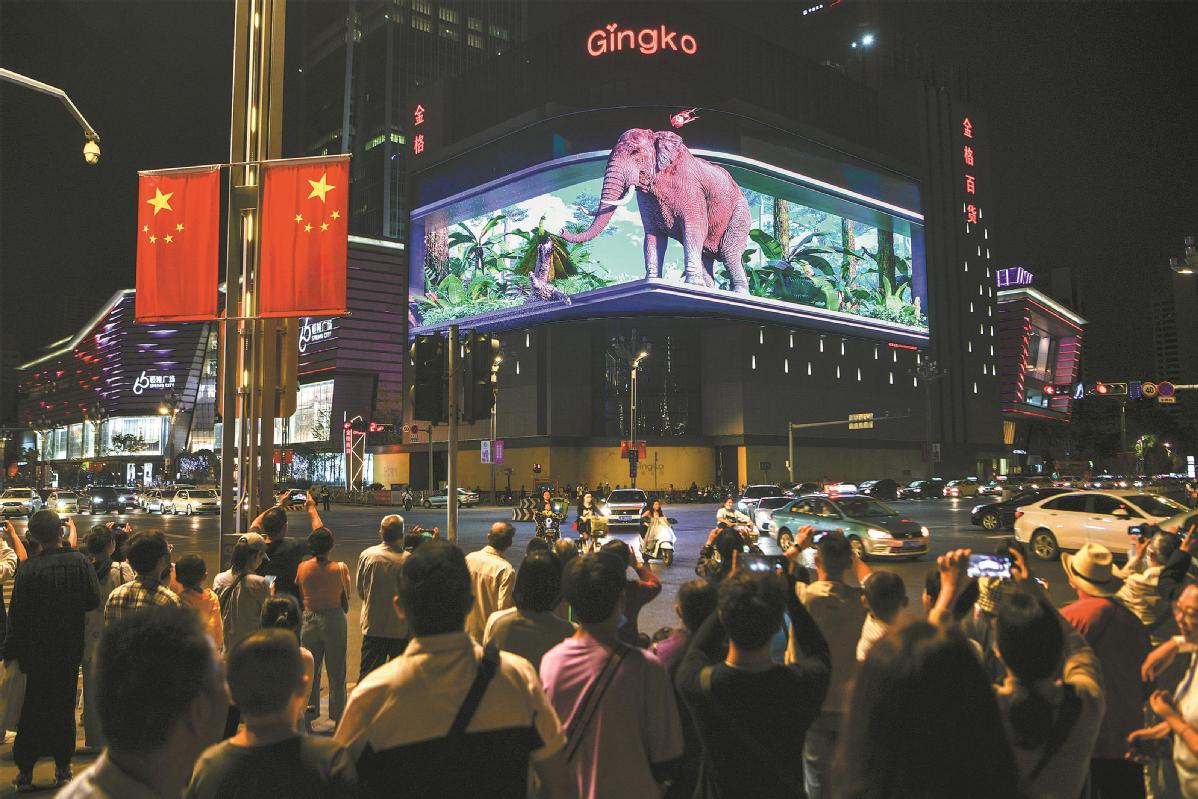 An image of an elephant appears to walk out of a giant 3D screen promoting biodiversity conservation in Kunming, Yunnan province, on Sunday. The COP 15 UN Biodiversity Conference will be held in the city from Oct 11 to 15. Li Tao/For China Daily

China has been making accelerated efforts to establish a system to appraise its concerted efforts in controlling pollution as it forges ahead with its climate targets, experts said.

They made the remark following the 21st meeting of the Central Committee for Deepening Overall Reform, which was presided over by Xi Jinping, general secretary of the Communist Party of China Central Committee, on Aug 30.

Xi, who is also the Chinese president, highlighted the importance of consolidating antipollution achievements, as the nation has entered a crucial period in advancing ecological civilization in the 14th Five-Year Plan period (2021-25) with a focus on reducing carbon emissions.

Ecological civilization is a concept promoted by Xi for balanced and sustainable development that features the harmonious coexistence of man and nature.

According to a statement issued after the meeting, the country aims to promote the synergy of pollution control and carbon reduction. The formation of institutional mechanisms that could integrate the plan for reducing pollution and carbon emissions, and the appraisal of concerted efforts, will be accelerated.

The meeting also vowed to speed up adjustments in the structure of industry, energy, transport and land use, while strictly controlling projects with high energy consumption and high emissions.

At a recent news conference, Minister of Ecology and Environment Huang Runqiu said that promoting the synergy of pollution control and carbon reduction means a transition in environmental governance in China.

Instead of mainly resorting to "end-of-pipe solutions", pollution-control approaches that clean up pollutants at the point where they enter the environment, the country tends to prioritize management at pollution sources, he continued.

Emissions of carbon dioxide and traditional air pollutants share the same source of fossil energy consumption. "The root causes of the environmental problems in China are its high-carbon energy mix and industrial structures with high energy consumption and carbon emissions," he said.

Wang Weiquan, deputy secretary-general of the Chinese Renewable Energy Industries Association, said the Chinese government has taken concrete measures to establish a mechanism to appraise work on promoting the synergy of pollution control and carbon reduction.

He said the National Development and Reform Commission, where the office of a central leading group for the dual carbon targets is based, announced only one day after the Aug 30 meeting that the leading group had established a working team for carbon accounting. The leading group is headed by Vice-Premier Han Zheng.

According to the commission, the team will be responsible for organizing and coordinating carbon accounting and verification at both national and regional levels, as well as in different industries.

China announced last year that it aims to peak carbon dioxide emissions before 2030 and realize carbon neutrality before 2060. Work to realize the targets is still in the initial phase and the country is still working to get a clear picture of its emissions situation, Wang noted.

The team will play an important role in addressing the problem. Aside from providing a benchmark that could determine how far it is still away from the goals, it will also lay the foundation for the establishment of the appraisal system, he said.

He said that China has a well-established appraisal system in the governance of air pollutant emissions. If the accounting, verification and appraisal system for carbon emissions can be integrated with that for air pollution control, "it will avoid a lot of repetitive work".