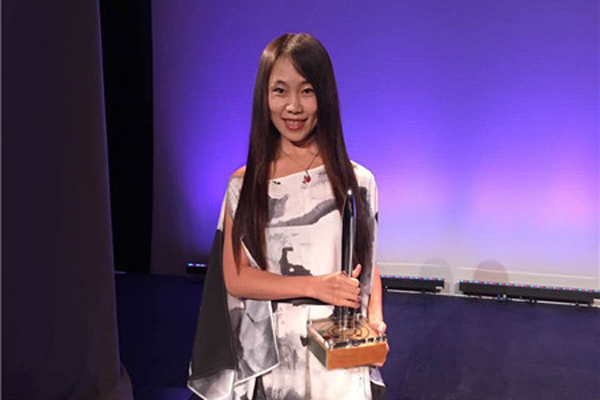 A new novel by the Hugo Award winner Hao Jingfang, which was released at the recent 2021 Children's Science Fiction Conference in Southwest China's Chongqing, incorporates Chinese cultural elements and history into sci-fi narratives.

"The new book embodies wuxia ("martial heroes") and ranger spirits," Hao said, adding she hopes to explore a sci-fi style with Chinese features and hero characters in her creations.

China's sci-fi industry was brought under the international spotlight when the renowned Liu Cixin won the Hugo Award in 2015 for his bestseller "The Three-Body Problem," the first part of the sci-fi epic "The Three-Body Trilogy."

"Sci-fi transcends boundaries. It is the literature genre that resonates the most among people from different countries and cultural backgrounds," Liu said.

"The Three-Body Trilogy" has been published in some 26 languages.

In recent years, Chinese sci-fi has been developing on a fast track. The total output of the industry stood at 65.87 billion yuan (about 10.32 billion U.S. dollars) in 2019, according to an industry report released in 2020.

"As China gains more global attention, the development of Chinese sci-fi has been brought into focus," said Wu Yan, director of the Research Center for Science and Human Imagination at the Southern University of Science and Technology.

SFRA Review, a publication of the U.S.-based Science Fiction Research Association, published research in two issues in 2020 and 2021, to study Chinese sci-fi literature.

Among other sci-fi products, games registered a stellar performance, the report said. In the first half of 2020, the output value of the sector topped 22 billion yuan.

"We are working with sci-fi writers to blend fantasies about the future into the games' worldview and art design," said Guo Zhi, a game producer at TiMi J3 Studio.

Guo said many elements of the studio's games originated in Chinese sci-fi productions, and he expected Chinese sci-fi to boom in the global market with games as a carrier.