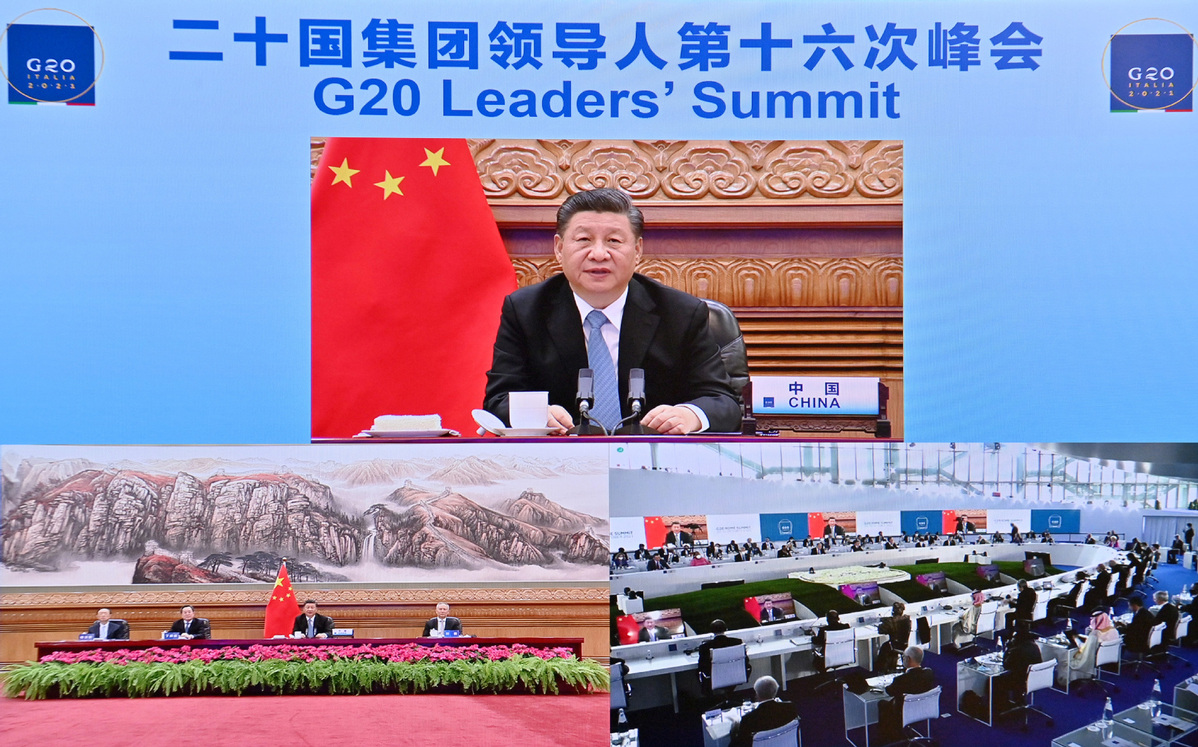 The IMF said in its latest "World Economic Outlook" report, released last month, that the momentum of global recovery has weakened and "uncertainty has increased".

In an effort to respond to such concerns, in speeches to the recent G20 Leaders' Summit and the APEC Economic Leaders' Meeting, for example, President Xi Jinping has spared no effort to elaborate on China's fresh Global Development Initiative, which he said is for countries big and small to join and work together against widespread sluggish growth.

Under the initiative, which Xi unveiled in September, "staying committed to development as a priority" is listed first among the six aspects that countries should work for.

Xi has used the word "robust" when defining the goal of such concerted actions－pursuing "more robust, greener and more balanced global development".

Chen Fengying, a senior economist and former director of the Institute of World Economic Studies at the China Institutes of Contemporary International Relations, said this is "because development is a premium benchmark for all countries, and the world haunted by the COVID-19 pandemic will be in deep trouble if global growth fails to gather steam in a robust way".

Last month, the IMF lowered its forecast for global economic growth this year and next year to 5.9 and 4.9 percent, respectively, citing "a downgrade" for advanced economies as well as low-income developing countries "largely due to worsening pandemic dynamics".

To make things worse, "the speed of job creation is generally lagging to compensate for the earlier employment losses, especially in developing economies" over the course of this year, despite the gradual rebound of the global economy, according to the "World Economic Situation and Prospects" report released this month by the United Nations Department of Economic and Social Affairs.

Analysts said that Xi's detailed solution for prioritizing development, put forth at recent multilateral, global or domestic conferences, could be summarized as four pillars for global action.

The four pillars are coordinating for continued, consistent and sustainable macroeconomic policy; advancing and reforming a multilateral trade system; boosting infrastructure construction and connectivity; and stabilizing industrial and supply chains.

Ren Lin, head of the Department of Global Governance at the Chinese Academy of Social Sciences' Institute of World Economics and Politics, said, "The first two pillars－macro policy and trade system－help countries including China discuss what they can do to improve global economic governance."

The other two pillars－infrastructure and supply chain-"focus on China's future concrete actions that will motivate countries to follow", she said.

"We can't say any of these four pillars is less urgent or superior, because they all serve to answer how countries could set out to make initial breakthroughs toward recovery," she said. "They influence each other in a positive way when they function simultaneously to form a joint push to growth."

In a review of countries' recent macro policy, Chen, the senior economist, said that what worried her most is their lack of coordination－especially from some developed countries－in phasing out their own macroeconomic policies and stimulus packages that target the crisis triggered by the pandemic.

"Emerging markets and developing countries will suffer from remarkable capital outflow and devaluation of their currencies if the US Federal Reserve creates dollars at a speed beyond the world's expectation," Chen said of why Xi underscored policy coordination.

Global trade justice and order are also threatened as the World Trade Organization's role has been affected by protectionism and unilateralism in recent years.

Xi's call for advancing and reforming the multilateral trade system with the WTO at its core "is aimed at underlining what countries should do to deal with the risk of its coming to a grinding halt and dysfunction", said Ren, the CASS scholar.

Regarding this year's 20th anniversary of China's accession to the WTO, Wang Shouwen, vice-minister of commerce, told reporters on Oct 28 that the country has "fully fulfilled" its obligations under the WTO and the commitments it has made, which has been recognized by leading officials of the WTO and the vast majority of its members.

Underscoring the role of infrastructure buildup in shoring up future global development, Xi, while addressing a symposium on Friday in Beijing that focused on the Belt and Road Initiative, called for continued promotion of the high-quality development of the BRI through joint efforts.

In addition, countries should "scale up support for developing transport infrastructure in the least developed countries and landlocked developing countries so as to achieve common prosperity", Xi told the opening ceremony of the second United Nations Global Sustainable Transport Conference on Oct 14.

Xie Feng, vice-minister of foreign affairs, told a forum on Nov 12 in Beijing that since 2013, the cumulative trade volume between China and its BRI partners has exceeded $9.2 trillion, and "the BRI has become the world's largest platform for international cooperation".

Chen Xulong, a professor of multilateral diplomacy and UN reform studies at the University of International Business and Economics' School of International Relations, said, "The BRI's philosophy and successful practice over the past eight years are conducive to advancing the Global Development Initiative, and the two visions will join hands, complement each other and form a great joint force pushing forward global cooperation on growth."

Jia Jinjing, deputy dean of the Chongyang Institute for Financial Studies at Renmin University of China in Beijing, said that in addition to improving infrastructure, the world needs to tackle an imminent supply chain crisis, as "products are out of stock in many places, and the prices of raw materials and bulk commodities are skyrocketing".

"Behind the crisis is that the institutions and mechanisms supporting the supply chain have failed to align with the changing world economy as the pandemic looms large," he added.

China proposes to hold an international forum on resilient and stable industrial and supply chains and it "welcomes the active participation of G20 members and relevant international organizations", President Xi announced while addressing the G20 summit in Rome via video link last month.

State Councilor and Foreign Minister Wang Yi told reporters after the summit that this move "brings together a strong joint force to maintain the security and stability of the global industrial and supply chain".

Jia, the Renmin University of China scholar, said that although the specific plan for the forum has not yet been revealed, "it will help bring global attention to certain countries' moves that disrupt the global supply chain, such as forcing computer chip makers to hand over business secrets in the name of supply chain security".