Join Hands towards a Shared Future

Fresh juicy cherries hanging low on the branches in the China-Chile Demonstration Farm in Tianjin get Chinese consumers one step closer to “cherry freedom”. In Mexico City, the groundbreaking of section one of the Maya Train Railroad Project contracted by China Communications Construction also brings the Mexican people one step closer to their goal of better development. These moments are telling examples of the friendship between China and Latin America and the Caribbean (LAC) countries. Since Cuba became the first LAC country to establish diplomatic ties with the People’s Republic of China in 1960, China-LAC relations have withstood the test of time and international changes. The two sides have all along trusted each other and sought common development. The China-CELAC Forum, since its inception, has provided institutional guarantee for the implementation of political consensus and cooperation plans between the two sides. And overall cooperation has since taken off across the board, achieving leapfrog development. 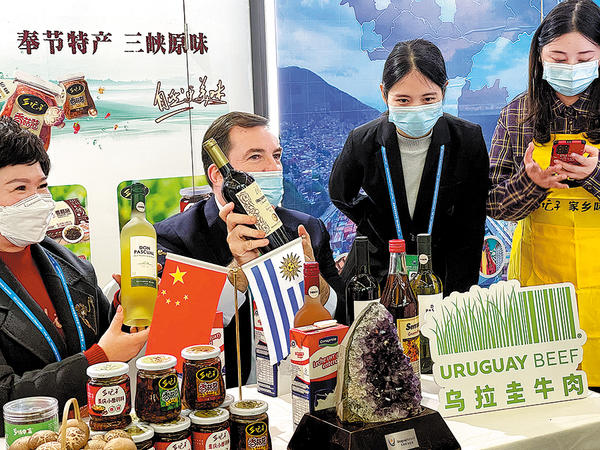 Fernando Lugris (second from left), Uruguay's ambassador to China, promotes Uruguayan wines via social platforms on the sidelines of a trade event in Chongqing. (Photo by Tan Yingzi/China Daily)

Sincerity and mutual trust in political relations. President Xi Jinping attaches high importance to the development of China-CELAC Forum. At the 2014 China-LAC Countries Leaders’ Meeting, he announced the official establishment of the Forum. In 2015, President Xi attended the opening ceremony of the First Ministerial Meeting of the Forum and delivered an important speech. In 2018, he sent a congratulatory message to the Second Ministerial Meeting of the Forum.

As the main channel for the overall cooperation between China and LAC countries, the China-CELAC Forum, covering nearly 20 areas such as political parties and affairs, agriculture, science and technology, economy and trade and infrastructure, plays an important role in promoting China-LAC comprehensive cooperative partnership. Since the founding of the Forum over seven years ago, the two sides have substantiated their exchanges and deepened political mutual trust. As a result, cooperation in various fields has yielded fruitful results. Twenty-four LAC countries have established diplomatic ties with China. Nineteen LAC countries have signed agreements with China on jointly promoting the Belt and Road cooperation. The Special Statement on the Belt and Road Initiative adopted at the Second Ministerial Meeting of China-CELAC Forum reflects the support and recognition from LAC countries on the Initiative.

What is particularly worth mentioning is that since the outbreak of COVID-19, China and LAC countries have helped each other, adding a new touching chapter to their friendship. President Xi Jinping had phone calls and exchanged letters and messages with heads of state and heads of government in the region, reaching important consensus on joint COVID-19 response. China donated a large amount of medical supplies including vaccines to 30 LAC countries, sent medical expert teams and carried out cooperation on joint vaccine R&D and production with relevant countries. When China was in the most difficult time in its COVID response, LAC countries rendered us sympathies and support in different forms and provided assistance to the best of their capacity. The two sides have worked together with concrete actions towards the goal of building a global community of health for all.

Win-win cooperation in economic and trade ties. Economic cooperation and trade is the anchor of China-LAC relationship and an important driving force for its sustained growth. China’s financial package towards LAC countries under the framework of China-CELAC Forum is advancing steadily, providing financial support for the economic and social development of countries in the region. LAC is China’s second largest overseas investment destination only after Asia. China has established free trade zones with Chile, Peru and Costa Rica, reached trade and investment liberalization and facilitation arrangements and signed industrial cooperation agreements with multiple countries in the region.

According to Monitor of Chinese Infrastructure in Latin America and the Caribbean 2021 published by the Latin American and Caribbean Academic Network on China, between 2005 and 2020, China had 138 infrastructure projects in use or under construction in the region, worth over US$94 billion and creating more than 600,000 jobs in LAC countries. China-LAC cooperation has effectively facilitated LAC countries’ efforts in shoring up weak links in infrastructure.

China-LAC trade has kept growing despite COVID-19. According to statistics from China’s General Administration of Customs, between January and October 2021, China-LAC trade volume was approximately US$369.1 billion, a strong year-on-year growth of 43.1%. In 2021, a Chinese Long March-6 carrier rocket lifted satellites of Satellogic, an Argentine company, to the planned orbit. The Argentine satellites will provide ABDAS, a Chinese data science company in Henan Province, with remote sensing services in agriculture. This epitomizes how science and technology has empowered mutually beneficial cooperation between China and LAC countries. Going forward, the bond of common interests between the two sides will grow even closer, and the outcomes of practical cooperation will benefit more people of both sides.

Mutual learning through people-to-people and cultural exchanges. Gabriela Mistral, the first Chilean Nobel Laureate in Literature, said that “friendship is mutual trust deeply rooted in heart”. Since the inception of China-CELAC Forum, China-LAC relations have enjoyed ever stronger public support and diverse people-to-people and cultural exchanges. The China-LAC Science and Technology Partnership and the China-LAC Scientist Exchange Program have been successfully implemented. Projects like the China-LAC joint laboratories, demonstration farms and Press Center have come to fruition.

Thanks to the mutual translation project of Sino-LAC philosophical and cultural classics, the people of LAC countries are able to appreciate the verses of Li Qingzhao, a talented female poet in China’s Song Dynasty (960-1279 AD), when she wrote “With the soaring wind, the Peng bird ascended. Oh, wind, don’t you stop, blow the sail of this boat because I want to reach the Three Immortal Mountains!”. Through the project, the Chinese people can better explore the dialectical relationship between civilization and barbarism on the Pampas grassland and the role of the environment on national character by reading Domingo Faustino Sarmiento’s famed book Facundo.

As Pablo Neruda, a well-known Chilean Poet, once said, “If we look at the map of America, we will find a very promising vista.” We will then have greater confidence in the future of Latin America. Looking ahead, China will continue to work with LAC countries to tide over difficulties, create opportunities for a bright future and defeat COVID-19 at an early date. Together, China and LAC countries will compose a new chapter of the “symphony” of the China-LAC comprehensive cooperative partnership and work towards a community with a shared future for China and LAC countries.

The author Yi Fan is an expert on international studies.